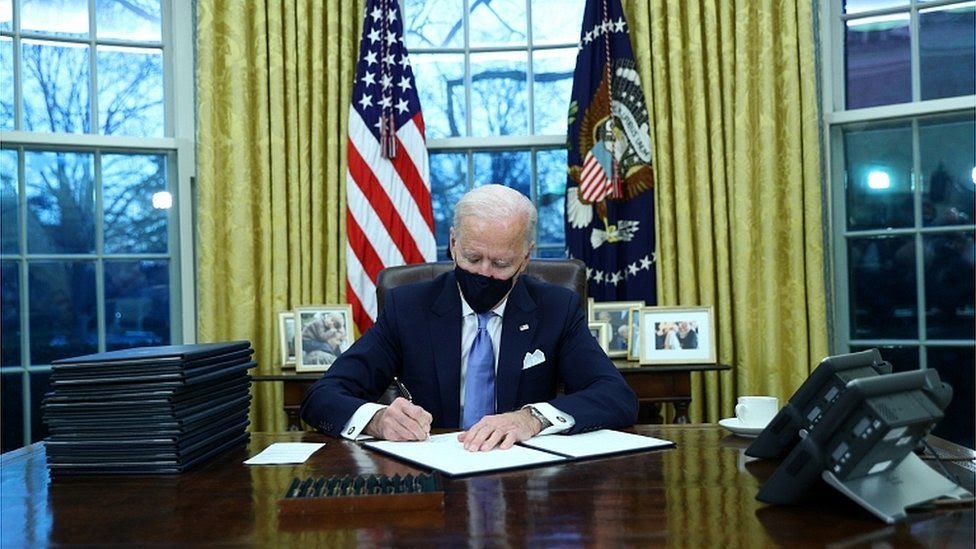 President Biden has set records by signing a whopping 42 executive orders and memorandums in his first two weeks in office. The sheer number of orders makes keeping up increasingly difficult. So, I will be breaking them down order by order for the next two issues so you, my dear reader, don’t get overwhelmed. In addition, please enjoy my non-expert opinion and my groundbreaking rating system that will hopefully make this slew of orders more clear.

I will preface this article by saying, I am generally not in favor of executive orders. To me they either represent a PR stunt or the executive branch bypassing Congress, potentially against the people’s wishes. Executive orders are by no means permanent and can be equated to putting a bandaid over a bullet wound, which is sometimes necessary but can also create a lot more work in the long run.

With that being said, Biden has worked to reverse the carnage of the previous administration, so I understand that some of these actions are necessary because they are very short term or they undo a previous order. Some of these orders are simple reversals of Trump policies, but others are 100% original to the Biden administration. This difference is important as I believe it makes up a portion of the dividing line between necessary orders and unnecessary ones.

Without further ado, here are my thoughts on the new executive orders!

‘Executive Order on Strengthening Medicaid and the Affordable Care Act.’

What does the order say? — This order reaffirms the Biden administration’s commitment to the Affordable Care Act. Heads of agencies have been ordered to review policies that could prevent people from getting healthcare. Obstacles could include financial burden, being COVID-19 positive or mid-year enrollment. The agency heads may therefore come out with new language in the next few weeks that changes healthcare access for people in these situations.

The spirit is there but this order doesn’t really do anything substantial. “There’s nothing new that we are doing here other than restoring the Affordable Care Act and restoring Medicaid to the way it was before Trump became president,” Biden said. I wish this order laid out actions that agencies must take instead of simply asking them to review policies. However, this may be a move to preempt SCOTUS’ forthcoming ruling on the ACA.

‘Executive Order on Enabling All Qualified Americans to Serve Their Country in Uniform.’

What does the order say? — This repeals the ban on transgender people serving in the armed forces put in place by former President Trump.

This ban has been an egregious mark on American history and never should have occurred in the first place. This order was much needed and therefore has rightfully earned an elusive five out of five Bernies.

‘Memorandum on Protecting Women’s Health at Home and Abroad’

What does the order say? — This order repeals the “Mexico City Policy,” which, when in effect, prohibits American-funded foreign NGOs from performing abortions.

This memorandum has been repealed and reinstated along party lines since the Reagan administration, so I am not surprised that this was one of Biden’s first acts. But nonetheless, yay reproductive freedom!

‘Executive Order on Tackling the Climate Crisis at Home and Abroad.’

What does the order say? — This order is basically a list of promises the Biden administration plans to adhere to. The order also creates the position of the Special Presidential Envoy for Climate and an office of Domestic Climate Policy.

Don’t get me wrong, I’m all for listening to scientists and making changes to make our Earth a safer place to live. However, a list of promises is nowhere near good enough. Obama established a similar office upon his election in 2008, but during the two years it was open, no substantial policy changes were made. In fact, every president since JFK has known about climate change, but we have yet to see major legislative change. Biden put climate change at the forefront of his campaign, so I expect legislation and nothing less.

‘Executive Order on Establishing President’s Council of Advisors on Science and Technology.’

What does the order say? — This one is pretty simple: it establishes a Council of Advisors on Science and Technology.

Like I said, I am so here for a President that trusts and follows science, but it is unclear what exactly this council will bring to the table. I really can’t make a statement on this council either way because I am unsure how it differs from any other council that deals with similar topics.

What does the order say? — This act formally reenters the U.S. into the Paris Climate agreement.

In a perfect world, the Paris Agreement would be a revolutionary act. But unfortunately, that is not our reality, and those involved in the agreement have a history of shirking the duties they promised to complete. This is more of a symbolic effort on the part of the new administration, an act of faith to show our allies that we are willing to be civil once again — one that must, however, be backed up with clear and decisive action.

‘Executive Order on Protecting Public Health and the Environment and Restoring Science to Tackle the Climate Crisis.’

What does the order say? — This order requires that heads of agencies investigate actions taken in the realms of public health and the environmental crisis during the Trump administration.

This is by no means a sexy executive order but it is a necessary one. The most important portion of it revokes the permit for the Keystone XL pipeline. This is a huge win for the environment and many Indigenous populations.

‘Executive Order On Advancing Racial Equity and Support for Underserved Communities Through the Federal Government.’

What does the order say? — This order states Biden’s commitment to equity for all. More importantly, it requires government agencies to investigate their own policies and make changes to ensure equity.

The message is important, but the order lacks substance. This seems frighteningly similar to companies making statements on diversity after being called out on Twitter for problematic or racist behavior. It’s too little, too late, though. Biden has a history of supporting racist legislation and making insensitive remarks. Without an apology and acknowledgement of his wrongdoing, this order has no meaning.

‘Executive Order on Preventing and Combating Discrimination on the Basis of Gender Identity or Sexual Orientation.’

What does the order say? — This order is similar to the one directly above, but with a focus on protecting all gender identities and sexual orientations.

Once again, this is a fairly hollow executive order. This could’ve easily been a speech followed by an email sent to agency heads. However, it is important to note that these orders establish Biden’s rhetoric as significantly less problematic than Trump’s. I will take an out-of-touch president over a blatantly racist and sexist one any day of the week.

‘Executive Order on Reforming Our Incarceration System to Eliminate the Use of Privately Operated Criminal Detention Facilities.’

What does the order say? — With this order, Biden effectively canceled all private prison contracts.

What does the order say? — This streamlines the process by which companies can apply for waivers excluding them from “Made in America” laws. It also lays out some new requirements that manufacturers will have to comply with.

This order places a premium on goods made in America for governmental use. Time will tell if this will encourage government agencies to use American goods. Hypothetically, this order will funnel more money into American businesses and therefore into American workers’ pockets.

What does the order say? — This order undoes a lot of Trump-era collective bargaining laws. In addition, it calls for a plan to increase federal minimum wage to $15.

A $15 minimum wage is very contentious but very necessary in my opinion. However, it must be done very carefully. By requesting a plan, Biden is formally stating his support of this legislation. This support will make congresspeople more likely to support the minimum wage increase should it come to a floor vote in the future. I’m glad Biden has requested a plan and I hope it is tactfully-designed to prevent unnecessary hardship for business owners.

‘Executive Order on Economic Relief Related to the COVID-19 Pandemic.’

What does the order say? — This very short order askes agencies to evaluate their policies in relation to the current economic crisis.

There is no decisive action here, but it does acknowledge the particular hardship that people of color are currently experiencing. I can only hope that the administration will do something to relieve some of this financial stress.

What does the order say? — All student loan payments are paused!

Yay! No student loan payments! Anyone with student loans disbursed by the federal government will not be required to make payments until Sept. 30 of this year. In addition, no interest will accrue until that date.

What does the order say? — No evictions or foreclosures are allowed until March 31 of this year.

This is huge. So many people are facing homelessness during this time of financial upheaval, meaning this will be a huge weight off of people’s shoulders. There are a few catches, but as long as you make under $99,000 a year and are facing eviction due to unpaid rent, then you’re covered! It’s important to note that you can still be evicted for lease violations or criminal activity as these don’t fall under the moratorium’s protections.