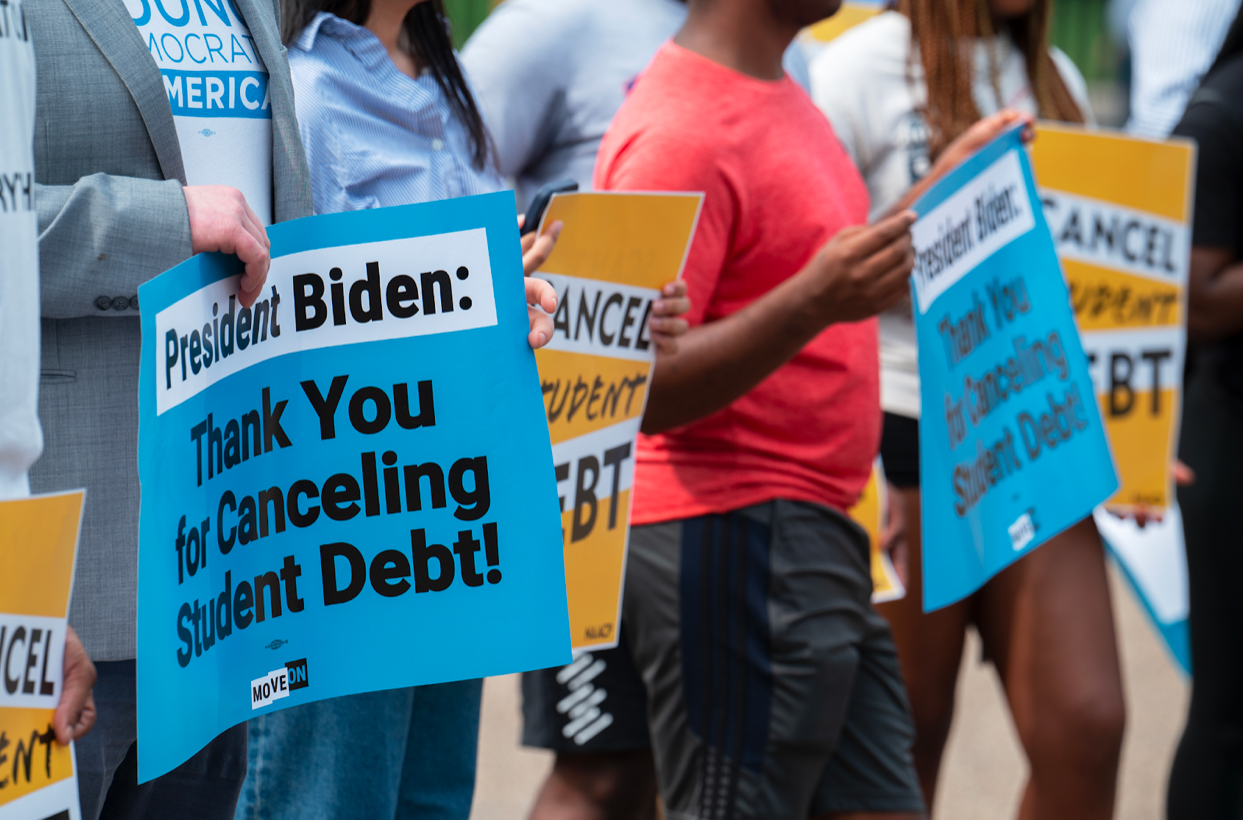 Students speak on how federal loan forgiveness program will affect them. Photo courtesy of The Washington Post.

Staying true to his campaign promise of taking action against student debt, President Biden announced his plan for student loan forgiveness on Aug. 24. However, Indiana is one of seven states that have officially announced they are planning to impose income tax on this student debt forgiveness.

Lilly Thumm, a senior political science and international studies major, has federal student loans. She was surprised to find out the new loan forgiveness program could apply to her too.

“Because of my parents’ salary, these things don’t [typically] apply to me,” Thumm said. “I did not realize that it actually was more aimed towards whoever the person [the loan is under], and so because it’s under my name, I do apply, which is exciting because I have a lot of loans to school.”

Mackenzie Winchester, a senior political science and international studies major, owes just under $20,000 in federal student loans. As a Pell Grant recipient, she qualifies to have all of her student loans forgiven.

“I’m still hesitant, and I’m afraid,” Winchester said. “I won’t believe it until I see it. I feel like I will not be able to take a breath of relief until the Butler portal shows up with zero completely.”

President Biden also announced on Aug. 24 that there will be another extended pause on student loan repayment through the end of 2022. The original decision to suspend loan repayment came in March 2020 as a response to the COVID-19 pandemic, but this will likely be the last extension on the pause.

Another provision of this act is that borrowers who took our private student loans will not be able to claim loan forgiveness. Even if an individual’s loans were originally public, but later refinanced to private, they are not eligible.

“It’s hard to forgive loans in the private sector,” Winchester said. “With student loans, you’re unable to file bankruptcy, which makes them extremely predatory. [The companies] are constantly coming after you, and people are owing more than what they started with.”

With this act, one-third of Hoosiers with federal student loans could have their debt completely erased, and it could significantly ease the financial burden for many others. Before the student loan forgiveness announcement was made, Thumm expected her life to be different after college.

“[I’m more open to considering] maybe taking a gap year and kind of trying some things out or traveling,” Thumm said. “That’s something that I think is usually something people don’t want to try because they’re worried about whether or not they can afford it. More than that, if I do want to go into a career after I graduate, it also helps me [afford] housing.”

The American Rescue Plan act stated that student debt forgiveness could not be charged with income taxes. However, Indiana did not adopt this policy in its budget for the fiscal year because it conforms to the Internal Revenue Code on a static basis. The state conforms to the changes in the IRC, but this only happens on selected dates. It is routinely revisited and updated.

Some representatives plan to challenge this taxation in the upcoming sessions of Congress. Gregory Porter is a Democratic representative in the Indiana General Assembly who has spoken out against it.

“I am drafting a bill to retroactively eliminate and nullify any state individual income tax being imposed on Hoosiers who are finally in a position to receive vital student debt relief,” Porter said in a statement.

Indiana’s state tax rate is 3.23%. This means that $323 will be charged from the citizens for every $10,000 of debt forgiven. Not only do Hoosier borrowers have to pay the state income tax rate, but they also have to pay their local county taxes. In Marion County, there is another 2.02% added to the state rate.

Sophomore strategic communication major Rachel Brown said she has not investigated the tax on the loan forgiveness because she does not personally have any student loans.

“I personally don’t think that a tax is unreasonable,” Brown said. “But I also could see how it would be like, ‘Why call it a loan forgiveness [program] if you’re still going to make us pay to use it?’”

Thumm is from Michigan, but she is concerned about Indiana’s decision to tax this loan forgiveness.

“It doesn’t seem fair that states can pick and choose whether they do or don’t tax when the federal government is the one that’s giving up the money,” Thumm said. “[The loan forgiveness] is not for the states; it’s for the students … I’d like to know where this money is going. Is it going back into schools? Is it going to improve salaries for teachers? Is it going towards something that’s actually going to make a difference in students’ lives?”

This student loan forgiveness plan only qualifies for previous loans. Loans taken out after June 30, 2022 will not qualify for relief — Butler first-years who did not borrow before this date will not qualify.

Time will only tell if this will set a precedent for more loan forgiveness or other social programs to happen again in the future.

“I knew I was going to go into a lot of debt; I just didn’t understand that it would be this much,” Winchester said. “I really hope [student loan forgiveness] is something that will change people’s perspectives on human culture and maybe there should be more social services.”

The Biden administration’s decision to take action on student loans was a surprise to Thumm.

“I think [that people view] loan forgiveness as a ‘socialist’ thing,” Thumm said. “ … I think that even though it might make people want to see more affordable, accessible higher education, this may already be too big of a step for some people that don’t like that this is happening for whatever personal or political reasons.”

Brown knows a few people who would not have been able to attend a place of higher education without withdrawing loans.

“I don’t think forgiving loans is unfair to anybody,” Brown said. “I think if you paid off your loan, that’s great for you, but for other people that can’t, it’s good for them. I don’t know why someone wouldn’t take advantage of having their student loans forgiven because there’s people that really struggle with their student loans. They can now keep going to college.”

Individuals that are interested in getting updates on when the loan forgiveness application opens can subscribe to the Department of Education’s update page.