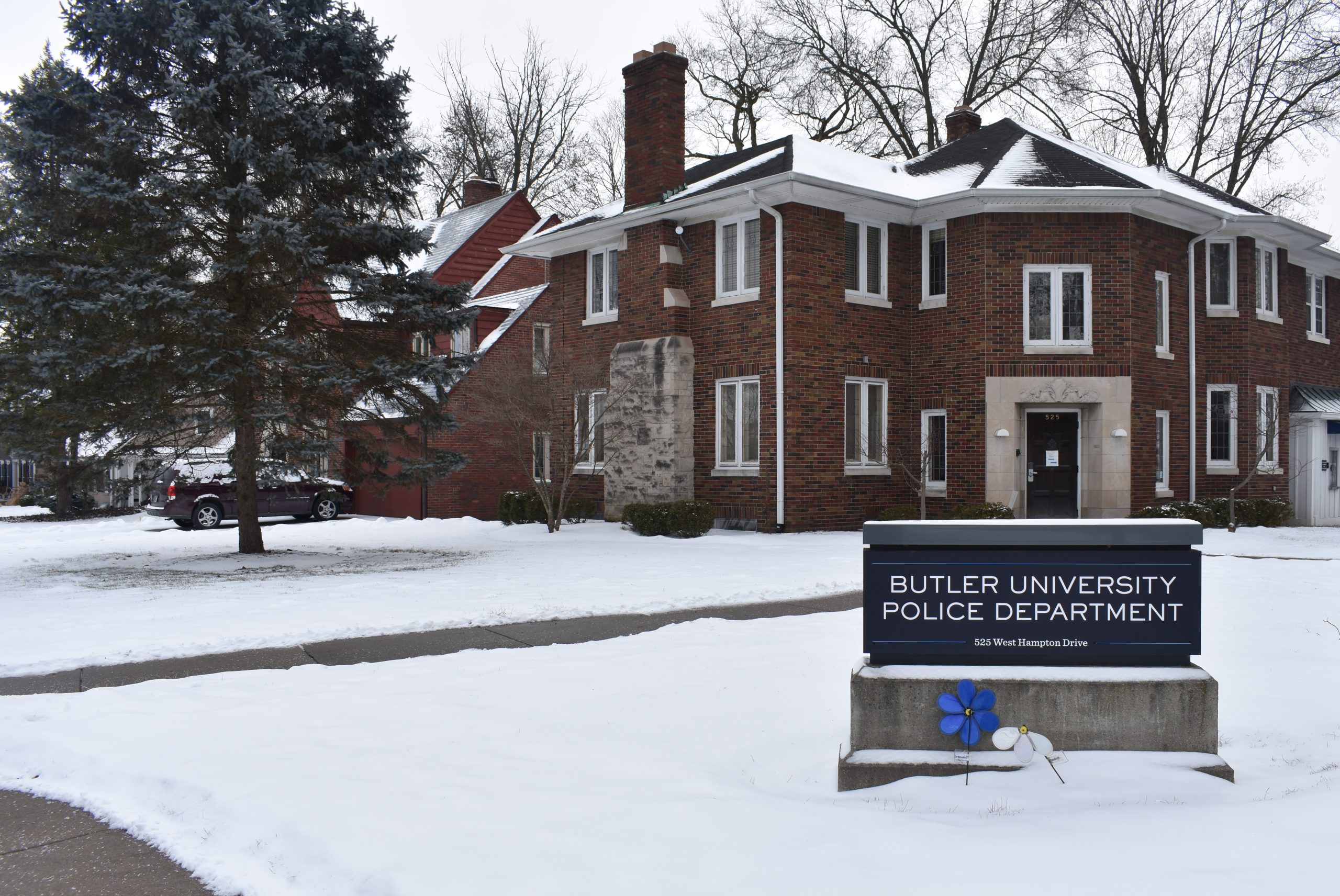 John Conley, the chief of BUPD, provides updates about the department. Photo by Lauren Jindrich.

Throughout the past year, awareness over the state of police relations in America has been heightened, which has caused many people to reevaluate the role of police departments. Butler is no exception.

At Butler, the University’s Police Department, or BUPD, is tasked with keeping the campus safe. This past week, The Collegian sat down with Chief of Public Safety John Conley to ask a few questions about how this year is going so far.

Conley said he thinks crime rates have been lower overall within the past year due to the social distancing and limited gatherings characteristic of pandemic protocol.

The two most common types of crime on campus currently are theft and sexual violence. With two Timely Warnings released to students in less than a month since the second semester has started, concerns are growing over the prevalence of sexual violence on campus. Conley said sexual crimes are heartbreaking.

“I’m trying to think of the right word to describe it in my eyes and my heart,” Conley said. “Horrifying. I’m the father of a daughter who just graduated from Butler. So when I hear these crimes occurring like that, I see it not only from a police officer’s point of view, but as a parent… There’s just no excuse for it, and I think we need to do a better job as a campus of holding each other accountable and making sure the message gets out.”

In regard to the recent thefts on campus, Conley noted that the property crimes and vehicle thefts have mostly been situations where people have left their cars unlocked, or their valuables in plain sight.

After working as a police officer for 45 years, Conley stressed the importance of vigilance on the part of members of the community. He said that reporting anything suspicious and locking up vehicles and properties are some of the best ways to prevent these different types of theft.

He said in terms of the perceived lower overall crime rates, he believes that students are doing a great job, and it is clear how much of an effort they are making to stay vigilant during the pandemic.

“It’s obvious that the educational value here means a lot to students because we see them really struggling trying to maintain their time here and do the right things, and I think that’s obvious to all of us,” Conley said. “And so for students to continue to do that and to hold each other accountable — not just for crime things but for those types of things too — is so important to the success of everyone.”

With concern to safety on campus, the question turns to racial discrimination and what BUPD is doing to address it. When faced with this question, Conley noted a few different practices that the police department is taking part in to better themselves. He said that BUPD was recently certified by the United States Department of Justice in their Use of Force policy, which means the department is up-to-date on their policies.

“We were actually one of the first universities to have that [certification],”  Conley said. “We applied for it the very day that the applications became open, only because we did not have to redo or update our policies on use of force and things because our policies already met the new cutting-edge standards. You know, it prohibited chokeholds and we train to that, and we try to look more and more at what some of the needs are in our community.”

BUPD is currently being reviewed by an advisory group made up of students, faculty and alumni. The advisory group is assessing the role of BUPD on campus and is expected to present their findings to President Danko this semester.

Conley continued to explain that over the summer the police department also participated in conversations with the Diversity Center on campus to better understand the issues at hand.

“I reached out to Gina in our Diversity Center, and all of our officers took part in all of her [Diversity, Equity and Inclusion] trainings, just so that we knew that what we were doing was what was expected of us,” Conley said. “It was very sad, all of the things that happened across the country, and I will tell you that I believe in my heart that those were individual acts by individuals and that it was not the culture of policing, the modern-day culture. We’re much better than that, and we should be, we should be held to that higher standard.”

With these trainings and deeper understanding, Conley talked about the plans that BUPD had hoped to complete during the academic year. However, he said that with COVID restrictions, communication has been challenging.

“So, we’re continuing to do everything we can to try to reach out to our community,” Conley said. “COVID has really hurt, in that respect, us networking with our students, because one of our projects for this year was a brown bag lunch series in our Diversity Center. But we haven’t been able to do that because we haven’t been able to gather.”

Even with these restrictions, however, Conley remains hopeful that conversations will become easier and more common.

The Annual Security and Fire report

The 2019 Annual Security and Fire report came out in December 2020 — a delay of about three months due to the pandemic. The report lists numerous statistics and statements related to the crime rates on campus in comparison to two years prior.

Conley said the report containing statistics for the 2020 calendar year should be published sometime around October of 2021. Whether or not those statistics will be higher or lower is still up in the air, although Conley has his predictions.

“Now I’m not a good gambler, and I have no crystal ball,” Conley said. “But I’m just saying with the pandemic and everything in general, there are certain crimes in society that continue to go up, while the remaining crimes seem to be going down. And a lot of that has to do with public activity… We have very very few visitors to campus right now, we have no real special events going on. We have basketball games starting back up, and very limited attendance, you know, of people out and around. So my prediction is you’ll see them down.”

Even with the different precautions and changing way of life right now during the pandemic, Conley stressed the fact that a normal day for a BUPD officer looks no different than it did pre-pandemic.

“We’re going to be here for your students no matter what. We can’t stay home because there’s a pandemic,” Conley said.

Conley said that the officers still show up and work 24 hours a day, 7 days a week, 365 days of the year. When they aren’t responding to active calls, he said that they are out making sure they are a visible presence on campus, for those in need and to deter the crimes of others.