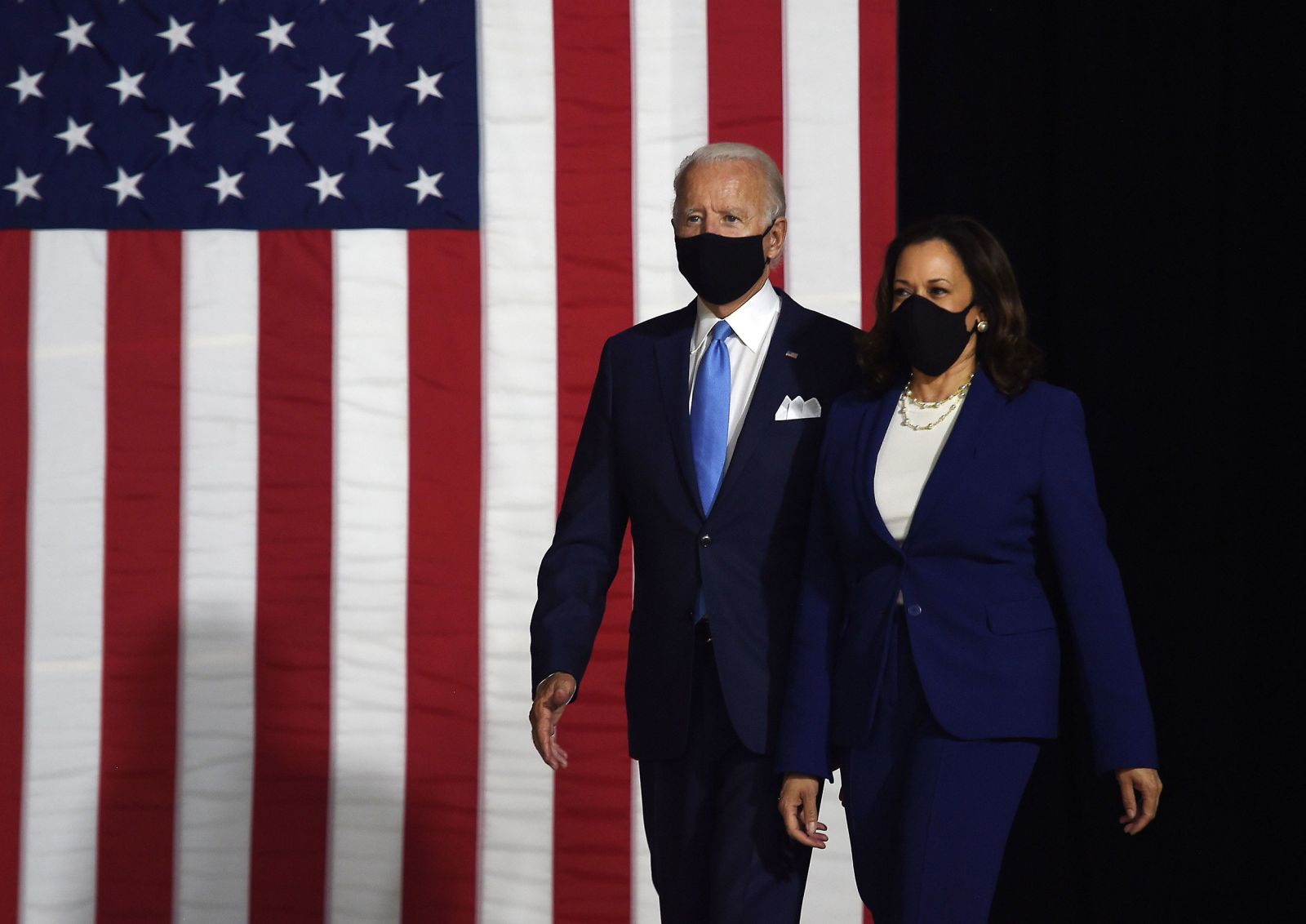 Biden and Harris have been announced as the projected winners of the 2020 election. Photo courtesy of CNN.

Former Vice President Joe Biden was announced as the projected winner of the 2020 election on Saturday, following a tense four-day wait for results after Election Day. Major news outlets called Pennsylvania, a critical swing state, for Biden with a margin of approximately 34,000 votes, which has since increased to a margin of around 45,000.

While four states — Alaska, Arizona, Georgia and North Carolina — have not yet been called, Biden’s narrow victory in Pennsylvania pushed him over the necessary 270 electoral vote threshold. Pennsylvania has 20 electoral votes, which left President-elect Biden with 279 declared votes, while incumbent President Trump currently has 214.

Biden was congratulated by many figures across the country, including key members of the Republican party. Among them was George W. Bush, who served as president of the United States from 2001 to 2009.

“Though we have political differences, I know Joe Biden to be a good man, who has won his opportunity to lead and unify our country,” Bush said in a statement released on Sunday. “… The American people can have confidence that this election was fundamentally fair, its integrity will be upheld, and its outcome is clear.”

The news of Biden’s election sparked celebrations across the country. Crowds gathered in cities such as Washington, New York and Indianapolis. Even outside the United States, cities reacted to the news with fireworks and church bells — in Ballina, Ireland, the president-elect’s ancestral homeland, people celebrated with displays of American flags.

President-elect Biden, who was born and raised in Scranton, PA, began his career in national politics in 1972, when he became the fifth-youngest person ever elected to the U.S. Senate. However, amid victory came personal tragedy; his wife and children were involved in a car crash which killed his wife and infant daughter, and severely injured his two sons, Beau and Hunter. Biden was sworn into the Senate from the hospital.

Biden continued to serve as a senator to Delaware until January of 2009, when he was sworn in as the vice president of the United States, alongside President Barack Obama.

Lily Haag, a sophomore secondary education and political science and history double major, said that while Biden was not the optimal pick from the Democratic party primary, he was the best choice for president.

“I am very glad it was him,” Haag said. “I think he’s the best option, there’s a lot of good prospects when it comes to environmental regulations and rejoining the Paris Agreement.”

Harris was born in Oakland, California to immigrant parents — her father moved to the U.S. from Jamaica and her mother from India. Raised by a single mother, Harris went on to receive a bachelor’s degree from Howard University and a law degree from the University of California at Hastings.

The vice president-elect then served as the district attorney of San Francisco starting in 2002; in 2008, she was elected as the attorney general of California. In 2016, Harris was elected to serve as a senator to her home state.

Haag described the importance of electing Kamala Harris to the office of vice president.

“I was talking to my grandma the other day, and she is 75 years old, and she was literally in tears about it because she just thought it was something that could never happen,” Haag said. “I think it’s getting overshadowed by the craziness that’s happening, but it’s so amazing and [Kamala Harris] should be getting a lot of attention for that.”

In a speech delivered in Wilmington, Delaware on Saturday night, Biden outlined his commitment to reuniting a divided nation.

“And to those who voted for President Trump, I understand your disappointment tonight,” Biden said. “I’ve lost a couple of elections myself. But now, let’s give each other a chance. It’s time to put away the harsh rhetoric. To lower the temperature. To see each other again. To listen to each other again. To make progress, we must stop treating our opponents as our enemy. We are not enemies. We are Americans.”

Vice President-Elect Harris also delivered a speech at the Wilmington event. She expressed her belief that Biden will work to heal a divided nation, and described the work of women who came before her — suffragettes and civil rights activists alike — that paved the way for her political career.

“While I may be the first woman in this office, I will not be the last, because every little girl watching tonight sees that this is a country of possibilities,” Harris said. “To the children of our country, regardless of your gender, our country has sent you a clear message: dream with ambition, lead with conviction and see yourselves in a way that others may not, simply because they’ve never seen it before. But know that we will applaud you every step of the way.”

Tarryn Harris, a sophomore international studies and political science double major, said she is ecstatic about Biden’s win. She described the impact of Kamala Harris being elected as the first woman and woman of color to be vice president.

“I think originally when she was announced as the nominee, I didn’t really buy into the gravity of it, after everything that had gone on during the primaries and reviewing her record and stuff like that, but after her being elected and seeing her speech… I almost started crying, seeing the little girls in Delaware waving the flags, I thought it was really powerful,” Tarryn Harris said.

As of this publication, President Trump has refused to concede to the president-elect, breaking with tradition. Since 1896, it has been customary for presidential candidates to concede after the result becomes clear. Instead, Trump has taken to Twitter to dispute the election results.

“Since when does the Lamestream Media call who our next president will be? We have all learned a lot in the past two weeks!” Trump tweeted.

Trump has reportedly been urged to concede by advisor and son-in-law Jared Kushner, as well as by his wife, Melania. However, Trump’s adult sons, Donald Trump Jr. and Eric Trump, continue to urge supporters to publicly reject the election results.

“We went from 4 years of Russia rigged the election, to elections can’t be rigged really fast didn’t we???” Trump Jr. said in a Tweet.

Alex Stencel, a sophomore political science and strategic communication double major, said that as a person coming from a centrist conservative background, he was not enthusiastic about the presidential race.

“Obviously [Trump] is upset, he probably lost, it’s safe to assume that he’s lost at this point,” Stencel said. “And it’s kind of like he’s in the stages of grief, where he still hasn’t reached acceptance yet, we’ll see that come once his advisors officially convince him that he lost. But yeah, it’s kind of what you’d expect if you knew he was going to lose.”

The Trump campaign is pursuing legal action in Arizona, Georgia, Michigan, Nevada and Pennsylvania, which is unlikely to have any effect on the results of the election. Judges in Michigan and Georgia have both thrown out lawsuits filed by the Trump campaign, but there will likely be a recount of votes in Georgia due to a tight, .25% margin in the state.

In the coming days, the remaining states will likely release their final election results. As is dictated by the 20th amendment of the U.S. Constitution, Biden and Harris will be sworn into office at noon on Jan. 20, 2021.