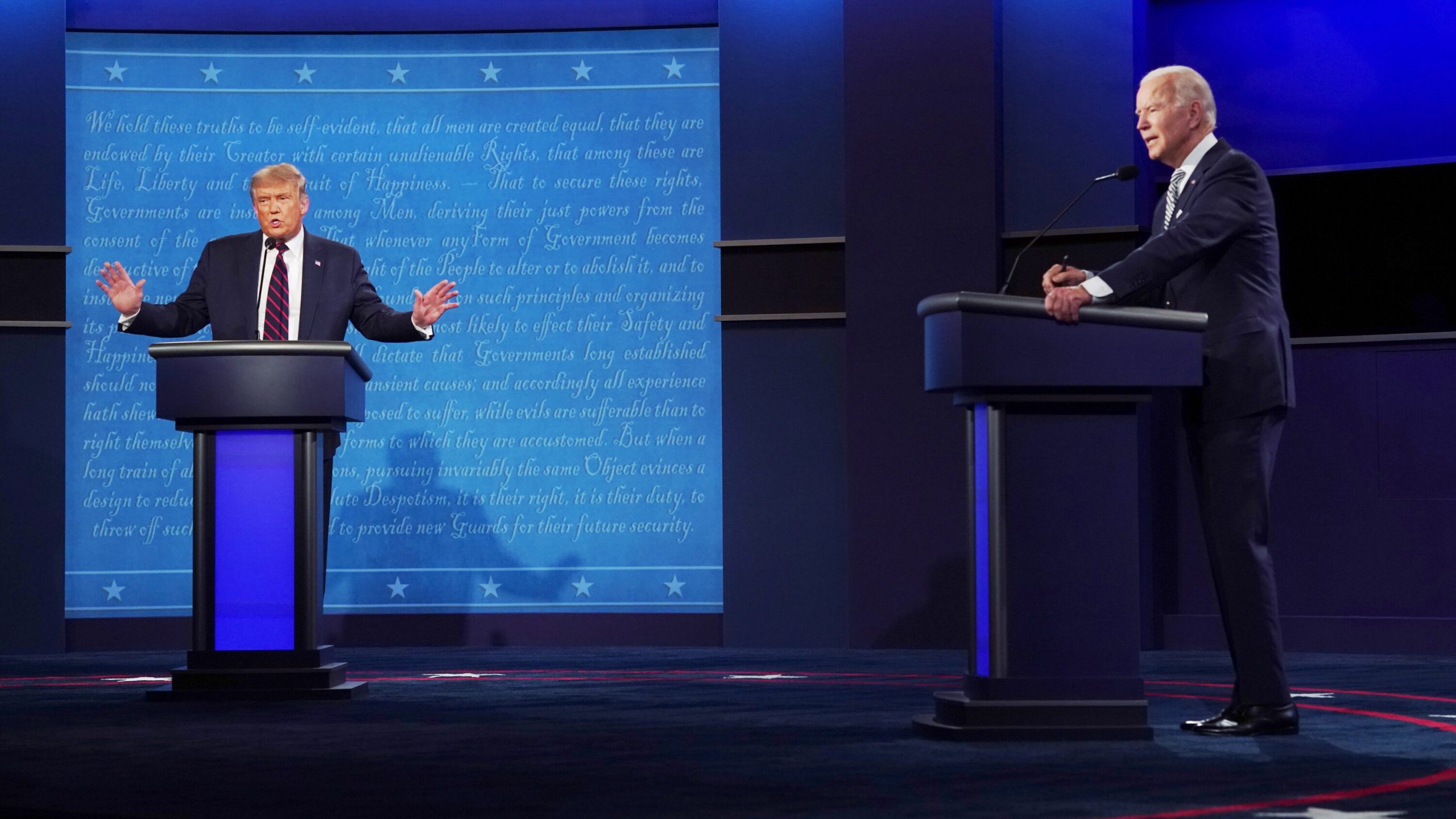 The first presidential debate between President Donald Trump and former Vice President Joe Biden on Sept. 29 left many people disappointed and angry at the breakdown of political etiquette. Key issues like the COVID-19 pandemic, social justice and the Supreme Court nomination were discussed, though both candidates frequently interrupted one another and attacked the other candidate’s policies and character.

The vice-presidential debate will be held Oct. 7, and Kamala Harris and Mike Pence will give their stances on similar issues.

The presidential debate came 35 days before the election, and many Americans have already begun voting through mail-in ballots.

Many people were disappointed in the behavior of the candidates. Kayla Miller, a first year political science and history combined major, said she thought the debate was “childish” and reflected poorly on the U.S. and this election.

“I guess I expected the people running to be President of the United States to act more like adults and more presidential,” Miller said. “But that’s not what happened. So I really don’t think it was a good look for the country, in general.”

The candidates were given two minutes to speak uninterrupted, and then were able to address responses by the other candidate. However, both candidates struggled to complete their time blocks without being interrupted. In one case, Trump interrupted Biden so many times that moderator Chris Wallace had to remind him that his campaign team agreed to two minutes each.

Greg Shufeldt, assistant professor of political science, said he felt there were no winners of the debate, only losers.

“I would say [the] morning-after articles and … debate night coverage talked about the breakdown in democratic norms,” Shufeldt said. “And how disappointing and ultimately, unhelpful last night was in terms of … democratic deliberation. That was not what we would like to see out of candidates or elected officials. So I think that’s probably the biggest thing in terms of mannerisms, decorum and things like that.”

Because of the backlash both candidates faced for their behavior at the debate, the Commission on Presidential Debates plans to change the rules for the next two debates. One possible change could be the ability to cut microphones if candidates refuse to stop interrupting each other. Trump signaled he would reject these changes, so it is possible they may not actually be put into place.

Despite disappointment in the behavior of candidates, Shufeldt said those who watched the debate most likely already knew who they wanted to vote for and were likely to find that person to have come out on top.

The CBS News/YouGov poll found that 48% of people thought Biden won the debate, while 41% thought Trump did. They also found that nearly 70% of viewers were annoyed by the debate.

Nick Gomez, a junior political science and history combined major, said the debate did not change his opinions on the candidates.

“If anything, [the debate] just further convinced me that this country has kind of gone to hell in a handbasket,” Gomez said. “To put it politely, it was a garbage fire. I think Biden really easily fell for Trump’s sort of like goading him into sort of playing on his level, and I think Chris Wallace didn’t do a very good job of being in the middle or being independent. He very clearly was trying to sort of goad Donald Trump into answering some pretty uncomfortable questions, and then, Trump was just immature. So altogether, I don’t think any part of that debate was what this country needed or should want.”

Gomez said two areas of the debate that stood out to him were Biden dodging a question about court packing and Trump’s statement on white militia groups. He also said at first, he was hesitant to vote this year.

“I don’t think democracy is proving itself to be a functioning system at the moment,” Gomez said. “And it’s going to be weird to see how it turns out this year, especially considering how many people are sort of making allegations regarding voter fraud, and how much that is turning out to be true, as well as, you know, just really the value of democracy in this country and how strong that’s going to continue to be.”

According to national polls, Biden is currently leading the race, and he is also ahead in 13 of 14 swing states. Trump won nine of those states in 2016.

Miller said she thought Biden performed better in this debate.

“I think what it definitely reaffirmed was the weaknesses in both candidates, and how Trump is definitely an aggressive bully, and I really dislike that about him,” Miller said. “And then, also, how Joe Biden can definitely seem kind of weak at times. But I did think it showed that Joe Biden cares more about the American people than Trump because he often looked at the camera and brought it back to what issues do the people care about, not what drama to stir up within Washington circles.”

In response to the debate, Shufeldt said he would encourage students to vote. Students can vote through an absentee ballot, mail-in-ballot or in-person.

“So likely, no matter what the outcome is on Election Day, about half of America is going to be very excited, and half of the country is going to be very disappointed and what will be interesting to see, is how big the margins are, and or what sort of strategy people that are in a position to govern choose to try to unite and find common ground versus pursue perhaps more partisan goals,” Shufeldt said.

Shufeldt also said he hopes that after this election, the country will return to normal and see democratic norms are upheld.

“So the idea that we have peaceful transitions of power, that people have confidence that their vote counted, and counted in the way that they intended it to, that people were able to participate in the process,” Shudfeldt said. “To me, perhaps more [important] than any individual candidate or partisan outcome, is that do we all ultimately feel comfortable that we can accept the results as kind of a fair democratic process if one or both sides don’t have faith in the system that has far-reaching and long-lasting implications.”