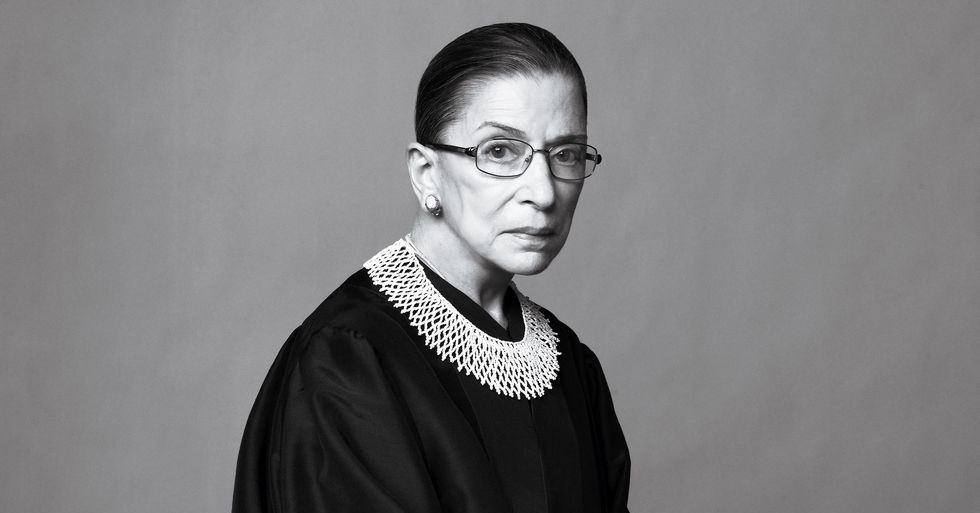 When I first read the news about Ruth Bader Ginsburg’s death, I thought it was something out of The Onion.

I’m not sure why I was surprised, frankly — her death is only the latest loss in a timeframe my friends like to call Hell Year. But when I opened the article, which my brain finally registered was from National Public Radio, I stopped breathing.

My phone began to buzz with messages. Friends, coworkers, strangers, expressing their anguish in a virtual — but visceral — deluge. Image after image of a petite, bespectacled woman with a distinctive white collar blanketed my social feeds.

Where to begin with someone so monumental?

Ruth Bader Ginsburg was the second woman in history to hold the position of Supreme Court Justice. Ginsburg began law school at Harvard in 1956. She was a new mother and one of only nine women in her class of roughly 500 students. Every step of her career was burdened by sexism; her legitimacy as a law student was questioned by Harvard’s dean, her pay as a young professor was halved by her employers and her ability to remain at work was threatened by pregnancy, which at the time was grounds for removal.

But Ginsburg never hesitated. When her presence was questioned, Ginsburg wasn’t content with “belonging.” She made it clear she dominated. When her pay was threatened, she and her female coworkers took it to the courts — and won. In an era where discrimination on the basis of sex afflicted every facet of life, Ginsburg blazed paths for others, undeterred in her vision for women nationwide. Her 27-year tenure on the Supreme Court ushered in landmark decisions that changed how women and the LGBTQIA+ community live and thrive.

Ginsburg’s career and professional trajectory were directly responsible for the incalculable progress made by women in her lifetime. She spent a decade with the American Civil Liberties Union, winning case after case in defense of women’s rights everywhere. With each success, her “brick by brick” parapet of protections grew.

Now, as National Women’s Law Center president Fatima Goss Graves noted in a Sept. 19 interview with NPR, the stakes have never been higher.

“… The Affordable Care Act argument is literally the week after the election, addressing the unrelenting attacks that come from anti-abortion extremists across this country, questions around whether survivors of sexual violence are protected in schools and in the workplace, whether this administration could radically restructure our benefit programs, whether organizations can take tax dollar money, on the one hand, and then turn away LGBTQ people with the other and discriminate against women — the truth is, really, all is at stake,” Goss Graves said. “And our very democracy is at stake if we don’t do this right.”

All of this brings us to a rather significant caveat. While Ginsburg is revered the world over for her legacy of gender equity and her cultish status as a “feminist” icon, the justice was far from perfect. In fact, Ginsburg had a mixed track record with tribal rights, and made critical comments about Colin Kaepernick, which she later retracted and apologized for.

We should not ignore Ginsburg’s voting record, but neither should we ignore the changes she made over the course of her career to right her wrongdoings. While her decision in Sherill v. Oneida — which in 2005 denied the Oneida Nation rights to their land — was unquestionably ignorant and incredibly harmful, Ginsburg shifted her voting record over the course of her career, and was the deciding vote in several cases that returned land to the rightful Indigenous party. One of her final votes, McGirt v. Oklahoma, returned the eastern half of Oklahoma to the Muscogee (Creek), Cherokee, Chickasaw, Choctaw and Seminole nations.

Just as it’s naive and shortsighted to idolize Ginsburg as an infallible proponent of girl-power, it is regressive to wholly cancel her.

In a Sept. 21 interview for the New York Times, Imani Gandy, senior editor for law and policy at Rewire News and co-host of the “Boom! Lawyered” podcast, noted that the scope of Ginsburg’s activism was limited — and people must acknowledge that and seek to rectify it moving forward — but we should not ignore her accomplishments in response.

“As a Black person, I definitely would have liked to see her be more forward-thinking on racial justice issues over the past few years,” Gandy said. “But denigrating her as an out-of-touch white feminist is a real disservice.”

It’s possible to keep Ginsburg’s faults in mind while simultaneously mourning the loss of a person whose entire career focused on protecting women and the queer community. It’s vital that we remember her individual activism as flawed and narrow, while acknowledging that rights and freedoms we take for granted could be lost without her.

I won’t mince words, not about this. I’m terrified for our future.

Mitch McConnell, hypocritical eel that he is, has declared his intent to place another conservative justice on the court before the election. This is the same senator — and posse, don’t forget — who blocked Democratic nominee Merrick Garland for 11 months, on the grounds that an appointment during an election year denies the people a voice.

Even Mitt Romney is on board. The votes are there.

Without Ginsburg’s presence, and especially should she be replaced by a Trump pick, cases boiling in the lower courts suddenly pose an intimidating threat. Remember Brett Kavanaugh, the man who assaulted Christine Blasey-Ford and was rewarded with a seat within the nation’s highest judicial office? Now imagine adding someone just like him.

Per usual, Twitter summarized it best: the fate of this country’s democracy should never have depended upon the stamina of one load-bearing 87-year-old in the first place.

Though Ginsburg may have been the sole legal safeguard of our rights, however, the attitudes she held were far from uncommon. As Goss Graves said, Ginsburg’s specialty was reconciling the nation’s prevailing social attitudes with outdated legislation — she permanently fixed what was already well-understood beyond the courts.

The nitty-gritty work was done, as it always has been, on the ground. Be it a riot or a blood drive, grassroots resistance has been always been championed by women and the queer community. Ginsburg’s role may have been the most prominent, but the accomplishments and perseverance behind the scenes were what allowed cases to appear before her in the first place.

Even now, the queer community faces threats regarding their rights — and general existance. Cases involving rights for LGBTQIA+ healthcare protections and housing discrimination have been brought to the federal stage as recently as this summer, and Trump’s 2020 platform is considered one of the most anti-LGBTQIA+ in the Republican party’s history. It’s a major part of why Ginsburg’s death is so upsetting for so many.

My pain and sadness are not just my own. I ache for the people around me who will never be the same after this. I mourn for the people who will be forced into precarious, desperate situations because there is simply no other way out. Lives will be lost, or irrevocably altered, and like many others, I do not know how to process the suffering that is yet to come.

I think about marching with hundreds of thousands of women and non-binary folks after the 2017 inauguration. I remember feeling like my grief and fear mattered, like the community around me was strong enough to make it through four years of hell — but that was with Ginsburg on the court.

I think about my sister, who was ten at the time, sitting perched on the shoulders of a neighbor. I think about her joy. I think about her bird’s-eye-view, a firsthand look at the strength of mothers and sisters and friends supporting one another. I am prouder of her than I am of anything else in the world, but I am terrified for her safety and well-being. Who will she be, in a world where her rights and freedoms may no longer exist?