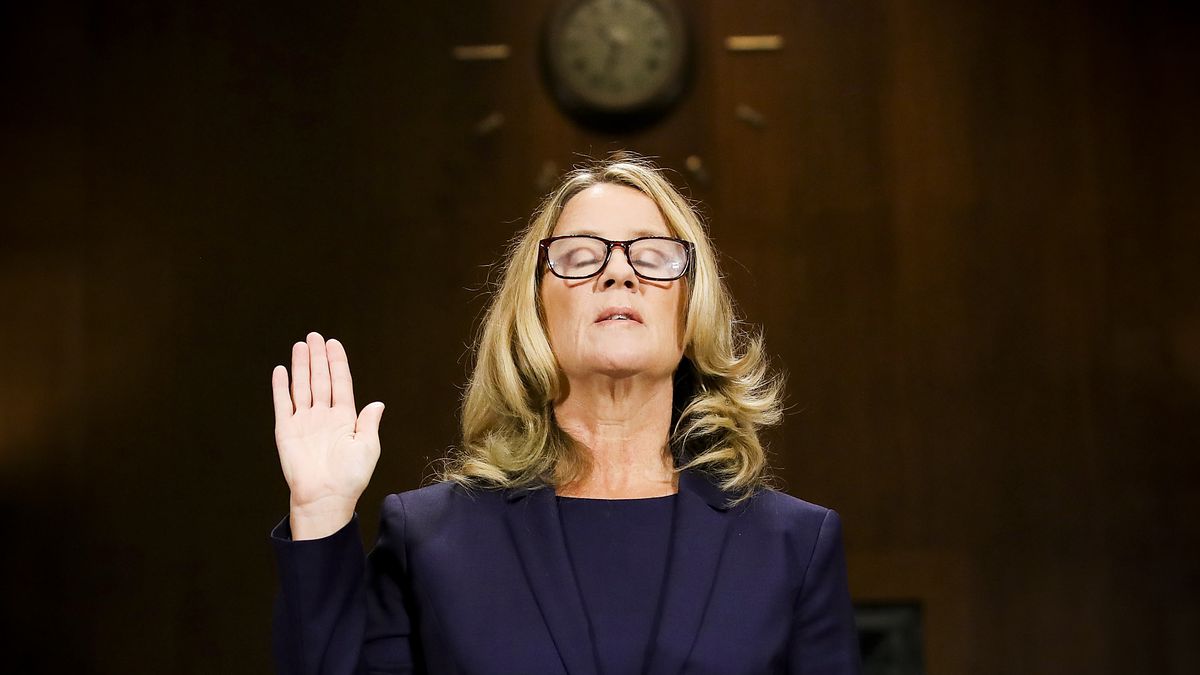 Dr. Christine Blasey Ford when she testified in front of the United States Senate on Sept. 27. Photo courtesy of Vox.

Although Brett Kavanaugh was confirmed just two weeks ago, the resulting outcry of anger and pain from women across the country is already fading into obscurity. The media is no longer discussing Kavanaugh’s emotional hearing; people are resigning themselves to his position, and most unsettling of all, the question of whether or not Kavanaugh sexually assaulted Christine Blasey Ford has vanished.

In recent events, this country has displayed a terrifying apathy — which often crosses into outright animosity — toward women who have the courage to come forward and talk about the traumas they have suffered through in silence for years.

Historically, women’s stories have been questioned and critiqued by men who see them as little more than statistics, or as political ploys to set one agenda or party over another. This attitude of indifference is incredibly detrimental to the collective female psyche and creates an atmosphere where people feel comfortable ridiculing women and discrediting their experiences.

Ford’s testimony during the Kavanaugh hearing is the most recent occurrence of a credible claim of sexual assault being suppressed because of its potential to damage a political power play. After meeting with her representative, Anna Eshoo (D-CA) in late July, Ford submitted a letter to Dianne Feinstein (D-CA) stating that Kavanaugh pinned her to a bed and sexually assaulted her.

Ford’s letter explaining what had happened between her and Kavanaugh was sent while he was still on the President’s “short list” of potential nominees, several months before Kavanaugh was even selected as the President’s first nominee to replace Justice Anthony Kennedy, who retired in July.

The Senate’s determination to confirm Kavanaugh even after Ford’s heartfelt, sincere accusation — a claim she made under oath, meaning it would have been the felony-level crime of perjury to lie — is not only a mockery to the establishment of the entire judicial branch but also an unsettling indicator of the increasing normalization and dismissal of sexual assault.

By allowing the Kavanaugh confirmation to move forward with neither an extended background check nor a critical, genuine attitude of respect toward Ford’s testimony, Congress actively sent a message to both Ford and to victims across the country: women who come forward to tell their stories, even when they are telling the truth, apparently come second to the feelings of a man.

Chuck Grassley (R-IA) and Lindsey Graham (R-SC) both immediately blamed Ford and the Democratic party for false allegations, stating that Ford’s claim was a last-ditch effort to deny Kavanaugh his nomination. Grassley asked for the results of Ford’s polygraph test following a letter from an anonymous ex-boyfriend of Ford’s, which said she was telling the truth.

Grassley argued the letter “[raised] specific concerns about the reliability of [Ford’s] polygraph-examination results,” never mind the fact that Ford had never undergone a polygraph examination and whose testimony was backed by several other claims. His doubt was infectious, and translated into vicious slander from conservative media outlets and social media users, which made the attack of a sexual assault victim that much more pervasive.

The issue of condescension towards women’s experiences isn’t contained within the confines of the legislative — and now the judicial — branches. The White House, America’s most public office, constantly exudes this suppressive rhetoric.

President Donald Trump, the man who is supposedly meant to be this nation’s No. 1 role model, has belittled the Me Too movement and many survivors of sexual assault who have come forward to tell their stories.

Most recently, Trump mimicked Ford’s statement at a rally on Oct. 2, mocking her in a way that called the credibility of her memory into question.

His openly demeaning attitude toward women has set a public precedent allowing numerous people — largely men — to feel comfortable attacking women when they have the courage to stand up for themselves.

When mocking assault fails to remove perpetrators from the heat, assailants and their supporters turn to justifying the situation in an attempt to escape the repercussions of their actions.

Recently, the “I was drunk” excuse has been used with alarming frequency by college students and political power players alike. Also bandied about are phrases such as “boys will be boys” and “but that was when I was young.”

Such constant rhetoric from prominent figures and the media that alcohol, gender, or age excuses you from your crimes is incredibly toxic and pervasive. There should not be a cop-out for the actions of a sexual assailant — and yet every day, perpetrators across the country are acquitted of all charges, or suffer through mere months of probation or prison.

Another prominent issue is the concept that victims are to blame for later legal complications if the incident was reported to authorities more than a few weeks after it occurred. In Ford’s instance, senators argued Ford should have sought law enforcement or action far earlier than she did.

In reality, the premise of immediate reporting goes against every action typical of a victim dealing with the psychological effects of sexual assault. In a recent article from The New York Times, Scott Berkowitz, the president of the Rape, Abuse, and Incest National Network — commonly known as RAINN — notes victims of sexual assault are often traumatized in a way that causes them to question the particulars of their own situations, which often leads victims to avoid reporting.

“A lot of people who call the national hotline, one of the first questions they ask is, ‘Was I raped?’” Berkowitz said.

Victims of sexual trauma often require outside validation of their experience before being able to recognize exactly what has happened to them, a process that can take months or even years, particularly if the victim is processing their experience without assistance.

Patriarchal standards ingrained into the social fabric of this country allow men to feel they are entitled to a sexual situation, encounter, or advance on a woman. This entitlement is morally wrong, and a violation of one’s basic right to be a human being free from unwanted sexual pursuance. Such an atmosphere of entitlement is only enhanced when “escaped scott-free” instances within the federal government solidify unforgivable behavior as a common and acceptable practice.