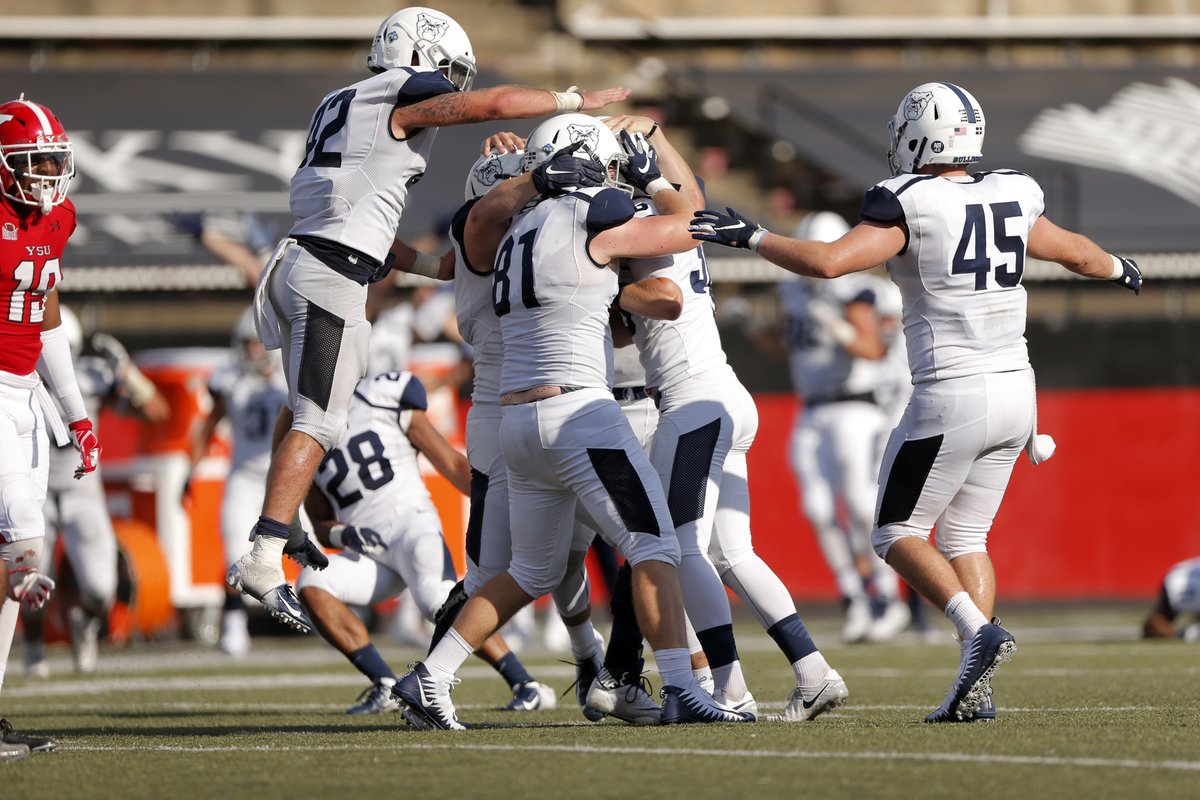 As the final tackle was made and the clock hit zero, then redshirt-freshman Butler cornerback Devin Aguilar sprinted towards the sideline, looking to find a teammate — any teammate — to celebrate with.

“It was probably one of the best feelings I’ve had playing football, it almost felt like taking down a goliath type of team,” Aguilar said.

Butler’s 23-21 win against Youngstown State on Sept. 7, 2018 goes down in the history books as one of the most improbable upsets in college football history — if not the most. It marked the first game in which a team with zero scholarships defeated a team with all scholarships.

Going into the game, No. 24 Youngstown State was favored by 35 points by Vegasinsider.com. Butler entered the fourth-quarter down 21-7. Down 21-20 with one minute remaining, Butler tried a two-point conversion — and failed. Only after they recovered an onside kick and hit a 44-yard field goal did Butler squeeze out the victory.

Butler was entering their first game of the 2018 season with numerous unknowns. In 2017, the Bulldogs recorded a 6-5 record, but going into 2018, they graduated their starting running back and their top two leading tacklers on defense.

Youngstown State, meanwhile, was stacked: they had four Division I FBS transfers and a running back and two guards who would later be named to an All-Missouri Valley team.

When Mickey Kane, a redshirt freshman, took to the field at Stambaugh Stadium — better known as “The Ice Castle” — he stood in awe of the 11,219 fans, most of whom donned Cardinal red.

“… this was my first career game, this was my first career start, so the atmosphere was a lot different on the field knowing you’re gonna play not only a little, but a lot, and especially as an away team with roughly 10,000 people there, so it was a fairly big crowd and we knew what we were going up against, and it was a very tense atmosphere compared to like a conference game,” Kane said.

Butler blazed to a fast start. Defensively, they shut down Youngstown State for a three-and-out. With 12:25 minutes remaining in the first quarter, then-sophomore quarterback Will Marty and then-junior wide receiver Pace Temple connected for a 28-yard pass to the Youngstown State 1-yard line. The next play, Marty snuck in for a touchdown.

“You couldn’t have punched them in the mouth any harder than we did,” Kane said.

When Youngstown State got the ball back, they nearly scored. With 11:14 remaining in the first quarter and Butler winning 7-0, Aguilar chased down Tevin McCaster, Youngstown State’s All-American running back, and tackled him at the five-yard line. The next play, the Penguins were called for a flag and pushed back to the 25-yard line, and they would not score until later in the first quarter, with 3:26 to go.

“We love using that game to provide an example of how effort, and maybe the little things, can help win big games,” Kane said. “We always like to back to plays like where one of our corners [Aguilar] making a huge tackle after the running back ran down, maybe like 70 yards and tackled him at like the five-yard line.”

Since it was Aguilar’s first start, he was willing to do anything to tackle McCaster. Before the game, he said he was numb with emotions — excitement, nervousness — but by the time he went for the tackle, everything came together.

“I was more excited than nervous — since I’ve been playing football for so many years, I was just excited to finally prove myself,” Aguilar said. “I was really excited to show basically what I have and what I can do while starting so that was nice. I’d be lying though if I didn’t say I was nervous.”

Elijah Ferguson, Butler defensive line coach, said Aguilar’s improbable tackle caused a “snowball effect.” Youngstown State was immediately called for a 15-yard penalty, nudging them from the endzone. The Bulldogs defense held their ground against the Youngstown State, preventing the Penguins from getting any closer to the end zone. Youngstown State then missed a field goal — the Bulldogs dodged a bullet.

“As the game started, one of the first drives of the game, they had a 60-ish yard run down their sideline,” Ferguson said. “I think had they went and scored on that play, the game would’ve had a different outcome. But because our defense held our ground and played with confidence, that was when we realized ‘hey, we can play with these dudes.’”

Even despite Aguilar’s improbable tackle, Butler couldn’t stop Youngstown State from marching down the field for a 69-yard drive for a touchdown, knotting the game 7-7 with 5:07 in the first quarter. With 3:05 in the second quarter, Kane forced McCaster to fumble on the 50-yard line. Although Butler would not score on the ensuing drive, it exemplified stellar execution on the defensive front.

“I had to fight like no one for it, but I like to say it was a big effort play, but I basically just had to jump on the ball,” Kane said. “And then, being great on special teams, not only with our game-winning field goal that everyone likes to go back to, and even our onside kick, but in general, finishing the plays.”

Headed into the halftime locker room with the score knotted up 7-7, Butler’s coaches emphasized the fact that Butler could play with Youngstown State.

To start the second half, Butler traded five possessions before Youngstown State scored on consecutive drives, extending their lead to 21-7. Throughout the game, the blistering September heat caused cramps in Bulldogs’ players, forcing multiple starters to sit out parts of the game. Down 21-7 at the end of the third quarter, it was clear that fatigue was setting in for the Bulldogs.

But the Bulldogs fought through it. In their first possession in the fourth quarter, Butler’s offense staged a 78-yard drive over 5:44 minutes to tighten the game, 14-21. Youngstown State and Butler traded quick possessions, before Butler forced a three-and-out with 4:42 remaining in the game. On the next drive, Marty completed four passes and scored a rushing touchdown with 3:18 remaining in the game. Going for the win, though, Marty was sacked.

“We got the ball back to the offense,” Ferguson said. “And they go down there and score, and when they score, it’s automatically ‘we aren’t even supposed to be here,’ so let’s go for the win, and let’s go attack these dudes… So you go from the highest of highs, scoring that touchdown, to the lowest of lows from missing that two point conversion, and going in with a calm and collective manner to execute this onside kick. And the onside kick goes through the first young man’s legs, and our receiver is right there on the edge to keep it in bounds, and he recovers it, now you go back to the highest of highs.”

Ferguson added that the Bulldogs experienced “every emotion capable of humans.”

It took an onside kick for Butler to get another chance — and they capitalized. After recovering the onside kick, the Bulldogs stampeded down the field. Kicker Drew Bevelheimer made a 44 yard kick. After Butler executed a tackle during the kickoff with four seconds remaining, Butler sealed the improbable win.

After the final play ended, Aguilar, unable to control himself, jumped-up-and-down, rushed onto the field to find anyone to celebrate with. He changed as fast as he could, so he could hug his parents, who were cheering him on in the stands.

“I knew that we had just made history by doing that and being a non-scholarship team taking down a team of all scholarship players, so it was nice to have that feeling for sure,” Aguilar said.

After the game, the Bulldogs were serenaded by the Butler band near their endzone.

“Trust me, that fight song was probably the loudest, most energetic post-game fight song we’ve ever had, and I’ll always remember that,” Kane said.

The Bulldogs chowed on their Jimmy John’s sandwiches and hopped on their bus for a six-hour bus ride back to Indianapolis. For the first hour of the ride, the team basked in their newfound fame, as they saw the ESPN ticker, with “Butler football upsetting Youngstown State” flashing along the bottom as breaking news. Later in the week, five days later, Sports Illustrated published an article: “With Nobody Looking, Butler Football Pulled Off One of the Biggest Upsets of the Century.” For the final five hours of the ride, most of the team slept, comfortable with the fact they pulled off a win to remember.

After conference wins that are considered “great,” in their Hinkle Fieldhouse locker room, the team props up a dog bone. The win against Youngstown State was the biggest dog bone on the wall.