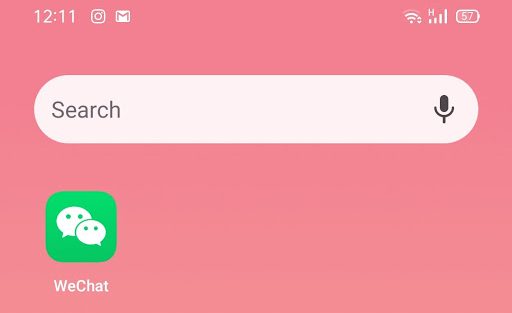 Popular app WeChat is one of the only platforms connecting those who live in mainland China to friends and family overseas. Photo courtesy of Mae-Mae Han.

In early August, Donald Trump signed an executive order that bans TikTok and WeChat, two mobile apps owned by different Chinese tech companies, which was to take effect on Sept. 20, 2020. The Trump administration cited concerns over national security, but for me — an Indianapolis-born Chinese American — it felt like Donny “Chinese virus” Trump was once again targeting the Chinese American community.

WeChat is a social media app owned by Chinese company Tencent. It is arguably the most popular social media platform in mainland China, and its use is ubiquitous in the country, be it communicating with friends, group chats, paying for groceries, video calling family, logging into public WiFi or staying in touch with old classmates.

My parents use WeChat daily to communicate with their family. Not only can they text, call and send voice messages, but they can also share photos and videos from their daily lives, like whatever we ate for dinner, my high school graduation or the birds that were outside our house.

My mom’s side of the family even had a group chat that I was in. Because of the Great Firewall, this app is the only means of communication I have with any of my family in China: in other words, it’s the only way I can interact with any of my relatives beyond my parents and siblings, short of actually traveling to China.

WeChat even allows me to stay engaged with my family when I am visiting them in China; in those circumstances that I do not have cell phone service, WeChat is the way I can make sure my aunt picks me up from the airport or otherwise avoid getting lost in a foreign country.

The Trump administration may bring up concerns over national security and privacy from entities in mainland China, but Su-Mei Ooi, an associate professor of political science and peace and conflict studies, said she believes that one should be wary of Trump’s rhetoric.

“It just feeds, I think, into this kind of image of China as threatening,” Ooi said, warning against the Trump administration’s xenophobia. “You can really fit [Trump’s executive order] into this overall overarching narrative of China as a ‘national security threat.’”

Since a WeChat ban would so specifically harm Chinese Americans, Ooi also said she believes Trump is adhering to the conventional American belief of Asians as “perpetual foreigners”  — the stereotype that people of Asian descent are never truly American, like the pervasive Asian American experience of constantly being asked, “But where are you really from?”

This xenophobic and racist belief incites an undue hysteria that Chinese immigrants or people with family in China are a “fifth column,” or a group of people working for a foreign enemy. Ooi referenced President Franklin D. Roosevelt’s Executive Order 9066, an example of American anti-Asian xenophobia leading to Japanese Americans being forced into concentration camps.

“I think this may come from an insidious ‘othering’ of Chinese Americans in the questioning of their loyalty to the United States,” she said.

Along with its popularity in mainland China, WeChat is also essentially the only connection between people in mainland China and the outside world. This is a cold fact that is particularly poignant for Chinese Americans when the Chinese government’s infamous “Great Firewall” prevents access to Google, Facebook, Instagram, Snapchat, Twitter, Reddit, Discord, Whatsapp, Twitch, YouTube, Gmail and much, much more from inside mainland China.

Thus, conventional means of communication and social media we would use in the United States are generally obsolete for interacting with people in China. Traditional phone calls are difficult to do since international calls can become expensive and require navigating a 12-hour time difference.

Calling also does not match the level of communication that WeChat offers by being able to host group chats, to have instant messaging, to do video calls and to send photos and videos.

Ooi said that the general trend from governments all over the world has been increased restrictions over internet freedom. It seems ironic that with this executive order, Trump emulates the very government he views as his rival. Meanwhile, it is ordinary people that must bear the weight of the repercussions.

While WeChat has over a billion users total, it has a staggering number of active users in the United States alone — 19 million — including both Chinese nationals and U.S. nationals. That is approximately the entire population of Indiana and Illinois combined.

A ban on WeChat could impact a large portion of those residing in the United States. Immigrant families can easily experience isolation, but WeChat offers an avenue for Chinese Americans to stay connected with their relatives in their mother country.

In addition to family, Xiaoqing Liu, an associate professor of Chinese who immigrated from China about 20 years ago, also relies on WeChat to connect with old friends in China.

“My old classmates began to include me in their [WeChat] groups,” Liu said. “So it’s good to find suddenly your old classmates 10, 20 years ago, and even in primary school students. So it really makes you feel like it’s easier to get connected to these old friends, right?”

Beyond talking with friends and family living in China, the app is tightly woven into the daily lives of Chinese Americans. Because it is so pervasive in China, a vast majority of Chinese Americans, specifically Chinese immigrants, have adopted it as their primary form of social media, even when communicating with others in the United States. While I spend much of my free time on Instagram and Snapchat, my parents spend much of their free time on WeChat.

People in my generation — children of mainland Chinese immigrants — joke about how our parents have countless contacts on WeChat to network with within the Chinese American community. For example, the community in WeChat groups are what keeps my mother passionate about running, and it is how she was able to train to run marathons. One of my friends has gotten numerous tutoring gigs through his dad’s WeChat connections. My sibling found their current job via my mom’s connections on WeChat.

The importance of access to one’s ethnic community truly cannot be understated, especially in a pandemic that limits in-person communication, and particularly in a pandemic that has given rise to anti-Chinese rhetoric — including from Trump himself — and hate crimes. This past spring, my mother used WeChat to mobilize the Indy Chinese American community to organize face mask and food donations for local hospitals. Concurrently, the Chinese American community in my hometown created a system to help anyone who experienced any anti-Asian violence — of course, also using WeChat.

As a college professor, Liu also expressed concerns over her career. In addition to video calling her mother almost daily using WeChat, she also uses the app to aid her academic career. She is in many groups for non-English language instructors and for Chinese-language research professors, which have been particularly helpful in navigating the unfamiliar landscape of online classes.

“I feel [WeChat is] such a good thing,” Liu said. “It’s not only just personal, right? It’s also beneficial to my work … [a WeChat ban] will cause, as a teacher, as a researcher, you know —  I will feel some kind of a loss of resources, you know, connections I will get lost.”

Because WeChat is absolutely integral for the Chinese American community, we were incredibly alarmed by the news of the Trump administration’s executive order.

“When the news [came] saying that it will be banned, I think I shared the panic feeling with a lot of people,” Liu said. “… And even I, you know, warned my mom, saying ‘Oh, we probably cannot chat on WeChat.’ And she said, ‘What can we do?’”

On Saturday, Sept. 19, the day before the WeChat ban was set to take place, my parents and siblings scrambled to find a replacement for our family group chat; others in the Chinese American community did the same for their respective WeChat groups. Liu said her groups considered transitioning to Telegram or Facebook. However, this still poses an issue for people of older generations, particularly those with limited English skills, who would struggle to adapt to new platforms. Regardless, both of these platforms are blocked in China because of the Great Firewall.

The morning of Sunday, Sept. 20, I woke up to a message from my sister in our family WeChat group chat: “WeChat ban blocked by federal judge.” The US WeChat Users Alliance, a non-profit group of Americans formed in response to the executive order, had successfully sued the Trump administration for violating free speech and due process. Though I was initially elated, I learned shortly after that this is only a hiatus. The Department of Commerce and the Justice Department both plan on challenging this order.

Wang said he views this whole situation as entirely ridiculous.

“I just want to say that this kind of reaction of trying to interfere with people’s daily lives,” Wang said. “Especially American Chinese as a population — this action of trying to stop them from communicating with each other … It’s really just not something a president wants to do … Like the Constitution says, everybody has equal rights, right? And Chinese American population … we came here for whatever reasons: work, study, immigration, whatever. So, I just think — just let us be.”

For now, the fate of WeChat remains uncertain while the fate of my community hangs in the balance.

As of the time of this article’s writing, the US WeChat Users Alliance currently is not requiring further donations for legal fees, but this may change as the situation evolves.