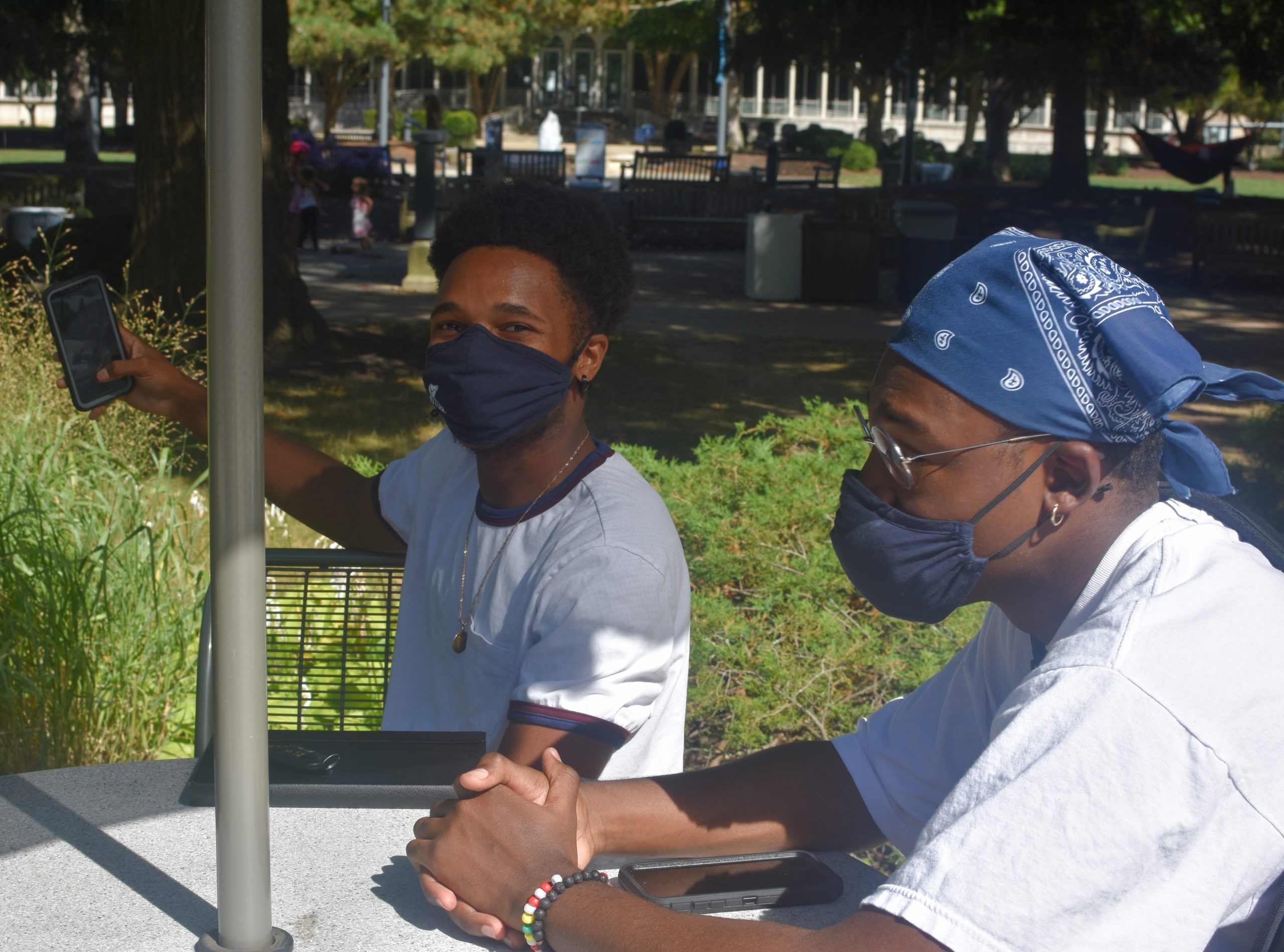 Mwaafrika and Cummings in action. Photo courtesy of Lauren Jindrich.

On Aug. 19, Butler University sophomore Chinyelu Mwaafrika, a theater and creative media and entertainment double major, posted a TikTok captioned “If I hear of parties…I will snitch” and went to sleep. When he woke up, the video, which was published on his account @chinforshort, had reached 300,000 views. Since then, the video has received over 7.2 million views and 2.3 million likes as of Sept. 8.

The TikTok urged students not to party on campus during the COVID-19 pandemic, warning that if Mwaafrika found out about any parties, he would report them.

“Snitches get stitches, I will take them b*tches,” Mwaafrika said in the video. “I spend too much f*cking money going to this school to stay in this dorm to get sent home months early because you motherf*ckers can’t follow the godd*mn rules.”

Devon Cummings, Mwaafrika’s roommate and sophomore vocal performance and music education double major, also took part in the video and was tagged as @stairway2devon. In the video, Cummings critiqued online classes by comparing Butler to a popular online university.

“If you think about it, online university is just like the premium version of DeVry,” Cummings said. “It’s just kinda ghetto.”

While it might be his biggest video yet, this is not Mwaafrika’s first foray into the world of TikTok virality. When he first arrived on Butler’s campus in the fall of 2019, he already had around 40,000 followers.

“It shot up so fast,” Mwaafrika said. “I’ve never seen that happen on my channel before, so it was like, shock. It got to a point where people that don’t follow me on TikTok were sending it to me because they’d seen it on other platforms, so I was kind of like, ‘what’s going on? What’s happening?’”

At the time Mwaafrika posted the video, he had just reached 100,000 followers on his TikTok account, a feat that took him over a year to achieve. Now, as of Sept. 8, he has over 395,000 followers — a nearly quadrupled amount.

This sudden influx of video shares and followers has caused some Butler students and faculty to recognize both Mwaafrika and Cummings from the video.

“A lot of people at Butler saw it,” Mwaafrika said. “Like, our teachers saw it, the administration saw it, Dr. Gina Forrest saw it. I wouldn’t say [I am recognized] often, like, it’s not like I can’t walk through campus without being harassed, but I’ve definitely had it happen more than a handful of times.”

The TikTok gained attention on a national level, as well. Since it went viral, the duo was interviewed for the “This American Life” podcast on Aug. 25, which has not yet been published. The video has also been featured on the Daquan public snapchat story, a popular page that shares trending content, and mentioned in an article written by the New York Times.

The video received over 20,000 comments, and in addition, one TikTok user drew the transcript of the conversation in a sketchbook word-for-word in response. Another TikTok user made the video into a beat, but according to Cummings, it was taken down.

Mwaafrika said the feedback he received was mostly positive and people seemed to share his viewpoint and feelings on the issue. He also said that his favorite comment he received on the video was ‘“everyone’s an RA now.”

“I think it’s a funny approach to kind of a serious thing and how I bet a lot of kids are feeling,” Walkoff said. “A lot of kids want to stay on campus and obviously they don’t want to have to rat people out just because partying really shouldn’t be happening right now, and I think a lot of kids were disappointed when a lot of kids came here and started partying.”

Despite students’ collective wishful thinking, Butler University announced that classes would be held remotely for two weeks on Aug. 23. Cummings subsequently posted a TikTok captioned “I’ve had about enough of Premium DeVry” on Aug. 26, which received over 263,000 views and 82,000 likes.

“Why the f*ck would you throw a party in the middle of a pandemic, especially at a PWI [predominantly white institution],” Cummings said in the TikTok. “Y’all don’t dance, and y’all wasn’t shaking no ass, so what the f*ck were you there for? What were you doing?… Like, there are a lot of Americans dying, and you want to wear your creased-up-ass Air Forces to Theta Beta Apple Pie? And for what? To drink f*cking Fireball and get sick and spread disease.”

While feedback from Mwaafrika’s video has been largely positive, Cummings did receive what he described as hate mail in the form of an Instagram DM containing a racial slur.

It wasn’t the duo’s first run-in with issues regarding race, either. Earlier this summer, Mwaafrika was quoted in a TIME Magazine article titled “These TikTok Creators Say They’re Still Being Suppressed for Posting Black Lives Matter Content,” which discussed a “glitch” that affected the hashtags #BlackLivesMatter and #GeorgeFloyd.

In the article, Mwaafrika said, “When someone says something and they have a clear pattern of behavior that shows that something else might be the case, then you can’t ignore that. TikTok as an app is not friendly to Black creators. Whether that’s because of the way that it’s programmed or because of the way that users interact and engage with content, it’s not an app that you see a lot of Black creators getting hugely successful on.”

While Mwaafrika initially gained TikTok notoriety by posting solo videos, his top-performing videos are typically ones that Cummings is included in, and vice-versa.

The duo posted a video to @chinforshort on Aug. 24 in which they urged U.S. Congress to prioritize the pandemic instead of Cardi B and Meghan Thee Stallion’s new single, “WAP.” The video gained 5.9 million views and 1.9 million likes.

“How the f**k are you in Congress worried about WAP?” Cummings said in the TikTok. “…I’ve got a WAP for you: worry about pandemic!”

While talking about their creative process, the duo attributed their success to a combination of natural talent, chemistry and a little bit of help from Jordan College of the Arts.

“Depending on who’s making the content, I mean, it’s very off-the-cuff for a lot of the time,” Cummings said. “We’ll be spitballing ideas and we’ll be like, ‘hey, that’s a good idea.’ And other times, it’ll just be like what we’ve been doing with these past two [videos] that have been really kind of like, ‘I got this idea. Let’s push record and see what happens.’”

Unlike Mwaafrika, who has studied improv for the past few years and has been acting since he was 13, Cummings’ knowledge of improv stems from his experiences at home.

“He’s just an actor. I’m just a weirdo,” Cummings said. “Growing up, my dad was very much into comedy and stand-up, and just like a lot of stuff that was very off-the-cuff and improvised. And he would know scenes and things and movies and stuff that were improvised, and so I would just kind of watch that stuff and learn how to be quick with it.”

Mwaafrika said the “I will snitch” video resulted from him remembering a conversation he had with his sister after Cummings mentioned having seen people walking around campus and partying. Mwaafrika keeps a running list of ideas on his phone — other video ideas have been sparked by everyday conversations or comments on TikTok.

As Mwaafrika’s TikTok following continues to grow, he said he has been contacted by several brands to collaborate with them in producing sponsored content, but has not accepted any offers yet.

Mwaafrika said that he enjoys creating content for his TikTok, but as a creator, he doesn’t want to be known exclusively for his video content.

“My main thing is that I’m an artist, I’m a creator — I’m not an internet personality,” Mwaafrika said. “I need to make sure that I can exist outside of the content that I put out on these apps. And then I can continue to create and have a life outside of the content I put on these apps. The content I make on TikTok or also on my Instagram and Twitter don’t define me. That’s not the extent of what I can do.”

When it comes to post-grad plans, Mwaafrika said he’s not sure whether he will continue to consistently post content to his TikTok account once he leaves Butler.

“If it gets to the point where I have to choose between a successful career on stage or in movies and TikTok, I’m going to choose stage and the movies every time,” Mwaafrika said. “Because that’s what I’m passionate about. But also, I have ideas and thoughts sometimes, and people like hearing my thoughts and ideas. So if I have time, if I have the energy, if I have the means, then yeah, okay, I’ll keep up with that. I’ll keep doing it.”