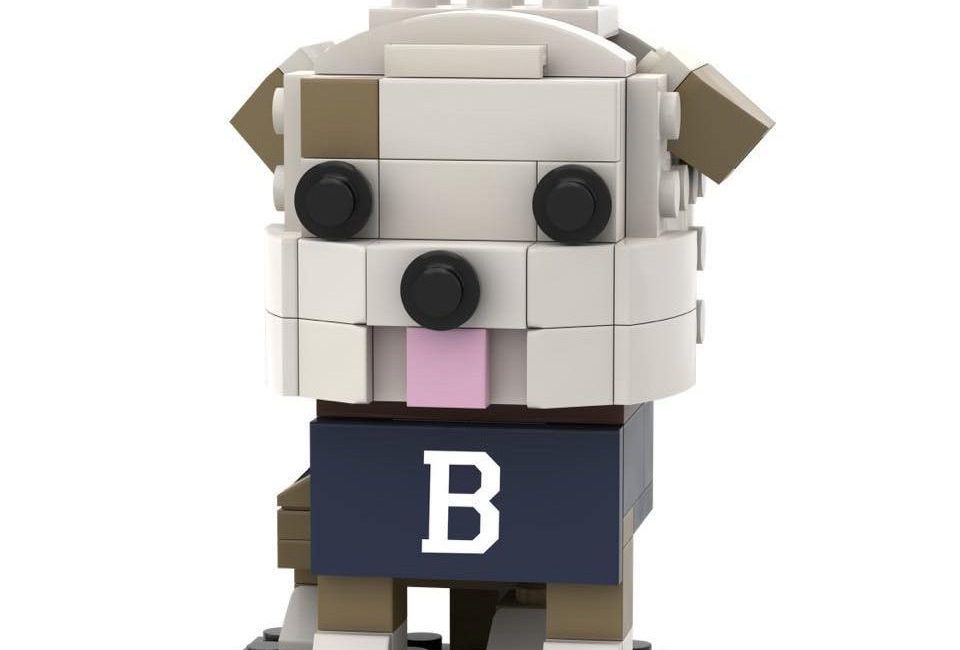 Butler Blue IV was introduced to the Butler community and the world this past January as Butler’s next official mascot. Since the announcement, Blue’s likeness has appeared on T-shirts, hats, coffee mugs, the floor of the Indianapolis Airport and now, Legos?

Yes, that’s right, Legos. The plastic brick-like toys that have been a staple in many childhood homes.

This Lego version of Butler’s newest celebrity was a product created by Bulldog Bricks, one of the many Real Business Experience groups on Butler’s Campus. RBE is a class that all sophomore business school students are required to take. During the class, students divide into groups and create their own product to sell on campus. Students take out real loans from Butler to pay for production costs and are mentored by a professional in the business workforce.

However, the coronavirus pandemic has forced RBE groups to work from home and sell their products solely online.

Bulldog Bricks is helmed by CEO Matt Kuster, a sophomore entrepreneurship and innovation major. According to the Bulldog Bricks website, the Lego set is a custom, 100-piece set that comes with detailed instructions on how to construct the toy.

The initial idea for a Lego Bulldog came from Collin Cahill, a friend of Kuster’s who had been in the RBE class in fall 2019. Cahill designed the Lego Bulldog set and intended on using it as his RBE project, but ended up pursuing another idea.

Kuster said the inspiration for pursuing such an idea was the product’s uniqueness in a saturated Butler merchandise market.

“The product was also able to attract a wide range of people to where our target market would open up,” Kuster said. “This made it easier and motivating, knowing that not only Butler students would want the Lego set but also alumni.”

At first, the team worried about being able to get the approval from the Butler licensing department to use Blue IV’s likeness for the Lego model. However, after reaching out to the department and explaining the business model, the team got the go ahead.

“That was when I knew we had something really exciting,” Holmes said.

Even though the product is made up of Legos, the group has had no direct contact with Lego.  The team orders the specific Lego parts needed for the Bulldog model, then ships them to customers with a custom instruction booklet they’ve created.

“We ordered certain pieces that went with the set,” Kuster said. “It was a long process getting everything sorted but it all turned out great.”

From there things began to take shape, as the team started a website and social media pages to gauge interest in the product.

Colbert, a sophomore finance major, said the company ran a presale and garnered a good amount of interest.

Things took a turn when the coronavirus pandemic led to the suspension and eventual cancelation of all Butler in-person classes for the rest of the semester. For a business that primarily relies on selling its product on campus, this presented some challenges.

“Like any other class, RBE moved online and we had to rethink our approach to selling,” Holmes said. “Thankfully we already had a website with an online store, so our transition was smoother than many other RBE businesses.”

Of course there was still concern as to whether people would purchase the product once it went live on March 26.

“It was scary, wondering if people were going to pay a higher price to offset our shipping costs,” Colbert said. “Luckily, everything worked out and we sold out of our inventory in 72 hours.”

In some ways, Kuster said he thinks that the shift to online sales helped bring Bulldog Bricks to a larger audience than if the product had been primarily sold on campus.

“When Butler went to online classes, we actually attracted more alumni and faculty than students because we had to add in shipping costs and it is hard for students to buy something on a college budget,” Kuster said. “We found that alumni loved our idea and that is where a lot of sales also came from.”

For those who missed out on the first round of Bulldog Bricks, the current team will continue their business into next fall semester. Additionally, there are pre-orders currently available on the Butler Innovation Lab website.