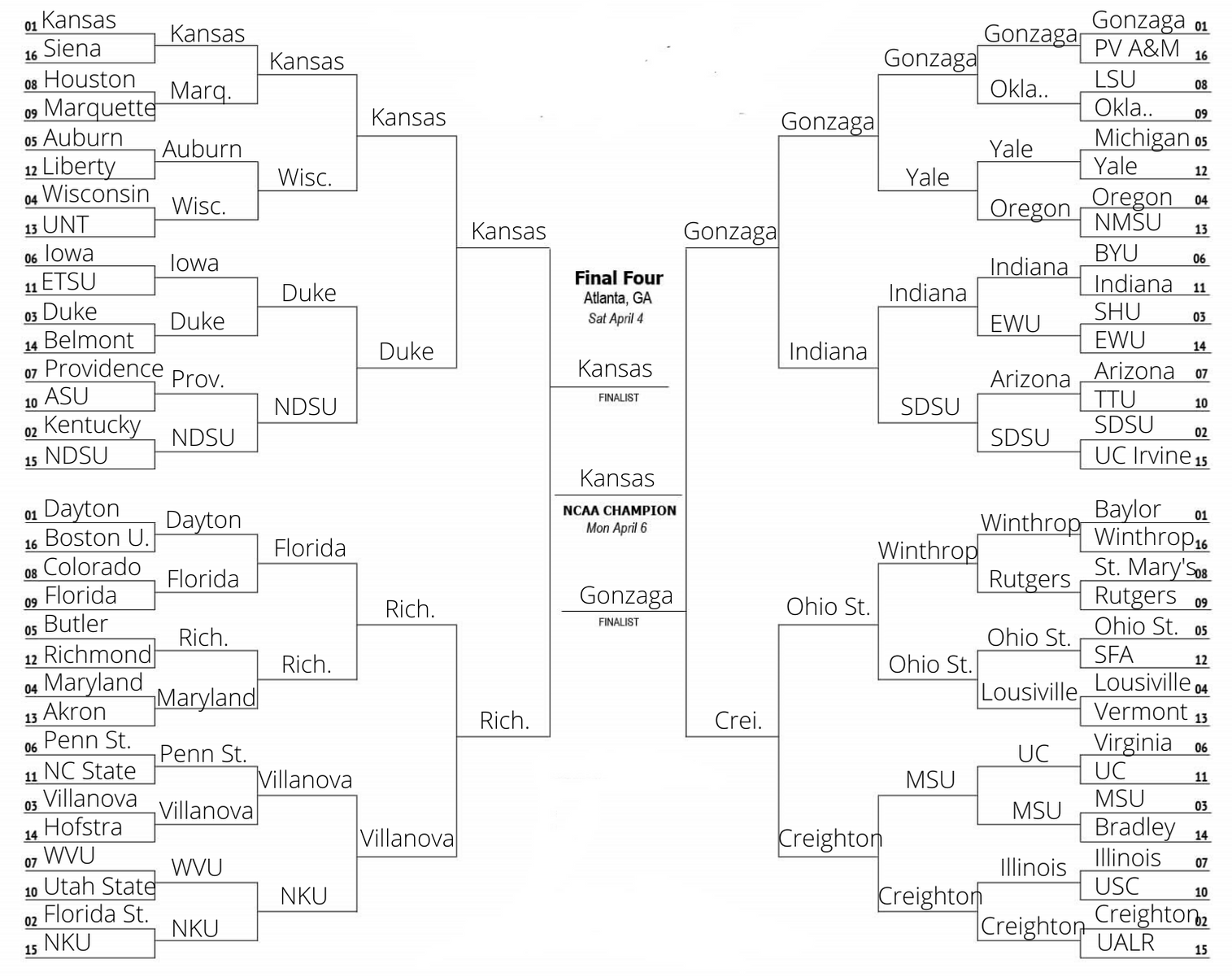 The NCAA Tournament bracket following the Collegian’s simulation of the Final Four. Graphic by Joshua Doering.

Here we are. 65 games, 130 halves and 2,600 minutes of simulated basketball have brought us to tonight. History was made in this tournament. Two 15-seeds won in the first round and they both won again in the second round.

And yet, arguably the two best teams in college basketball stand at the end, the first time in history the top two overall seeds advance to the championship in a 64+ team bracket. By now, you’re familiar with the teams, coaches and programs.

Here’s what’s at stake: Kansas has been a high-achieving team in the regular season ever since Bill Self came in as head coach. However, they’ve struggled to string together six wins in a row come March Madness. Self would like to add a second ring to his hand. Gonzaga, on the other hand, has never won a national championship. The closest they came was in 2017 when this year’s senior class were just freshmen. Killian Tillie and the Zags are looking to amend that painful memory tonight.

In a season where the top seed was so volatile, it’s fitting that these two went through the tournament relatively unscathed. Aside from a game each, they’ve run through the bracket without too much resistance. Now, let’s see who wins between the unstoppable force and the immovable object.

Kansas won the tip and that wasn’t the only thing right they did in the opening minutes of this game. The Jayhawks used a couple of buckets from sophomore Ochai Agbaji and two more from Marcus Garrett and Udoka Azubuike to sprint out to an 8-0 lead in the first two minutes of the game. One might think this early punch in the mouth might set Gonzaga out of this game for good. They’d be wrong. Mark Few’s group responded right back with a Joel Ayayi and-1 and 3-pointer from Killian Tillie to get right back within a bucket.

It was quite evident early on that Gonzaga was going to have to contain Azubuike if they wanted to win this game. Fortunately for the Zags, they have the bodies to do it between Tillie, Filip Petrusev and Drew Timme. Unfortunately for the Zags, you still have to stop the big 7-footer from Nigeria, which is easier said than done. Azubuike scored three straight buckets around the rim by himself to grow the KU lead once again before the midway point in the first half.

As seen in the Creighton game, it is nearly impossible to disrupt this Gonzaga offense for a full 40 minutes. They are going to find a stretch in this game where the shots start falling, and they come in bunches. A flurry of buckets including a tip-in from Tillie and a 3-pointer from Anton Watson tied us right up at 23. Then the teams got tied up again at 25. And again at 27. And again at 29. It was about as back-and-forth of an opening half as you could get. The Jayhawks would continue to try to break away, getting up by five or six points, but timely shots from Gonzaga would tie everything right back up. We entered the halftime locker room with the teams tied at 35. Just 20 more minutes to play for a national championship with an even slate.

Out of the break, Gonzaga was the first to score, breaking the tie. Shockingly, despite all of the ties in the first half, the Bulldogs had not held a lead in the entire game until that moment. Moments later, Kansas answered with an Agbaji 3-pointer to regain the lead. Both offenses struggled out of the gate as defenses began to raise their intensity. One thing was for certain: Kansas is not even in this game without the play of Ochai Agbaji. This entire tournament, the narrative has been about the duo of Dotson and Azubukie, but the Jayhawks would be dead in the water if not for the play of their starting small forward. He hits another big 3-pointer midway through the half to keep Kansas close as Gonzaga begins to take a lead.

As the half continues, one player made his presence known more than any other: Devon Dotson. The guard had been contributing solidly throughout the night, although very quietly. The Jayhawks were just waiting for his time to put his mark on this game and did he ever. He hit a 3-pointer and converted an and-1 near the 5-minute mark that thwarted Gonzaga runs led by Killian Tillie. Gonzaga’s senior forward played probably his best game of the tournament to that point, but he kept getting outmatched by number 1 in white.

With all that said, it was still just a two-point advantage for Kansas heading into the last four minutes. A Dotson contested 3-pointer is answered right back with a big shot from Ryan Woolridge, but in the end, the Zags’ defense could not get stops when they needed them. The Jayhawks would go on to put up 18 points in the last four minutes including timely and tough shots from Dotson. In the rare times that he missed, David McCormack got impact rebounds and putbacks that kept the Zags at bay. Gonzaga’s Corey Kispert hit a shot at the buzzer, but it didn’t matter! Kansas is your first champion of the new decade! Bill Self brings another one home to Lawrence!

The blue and red streamers fall from Mercedes-Benz Stadium as Jayhawk players and coaches pile on near the KU bench. Kansas has had national players of the year and number one overall draft picks, but Self says in a postgame interview with Jim Nantz that these moments are what keep him getting out of bed every morning to bring this home to Rock Chalk Nation.

Devon Dotson is unsurprisingly named the Final Four’s Most Outstanding Player as from his 32-point performance in round 1 to his big-time performances here in Atlanta, he was the heartbeat of this Kansas offense that proved to be unstoppable in this tournament. Udoka Azubuike’s four years in Lawrence culminate in a championship as he celebrates with his parents who were able to make the trip to Atlanta. In a hectic and bizarre tournament, it’s the number one overall seed Jayhawks that take the crown! Until next season…

And that was what could’ve been in the 2020 NCAA Tournament. One thing that became clear to me when writing these is that we will remember this forgotten tournament forever. For me, I know it has made me realize that some of the staples in our life can be taken from us at any moment. I know many college basketball fans will never take these three weeks for granted again. May the next One Shining Moment be the sweetest yet.