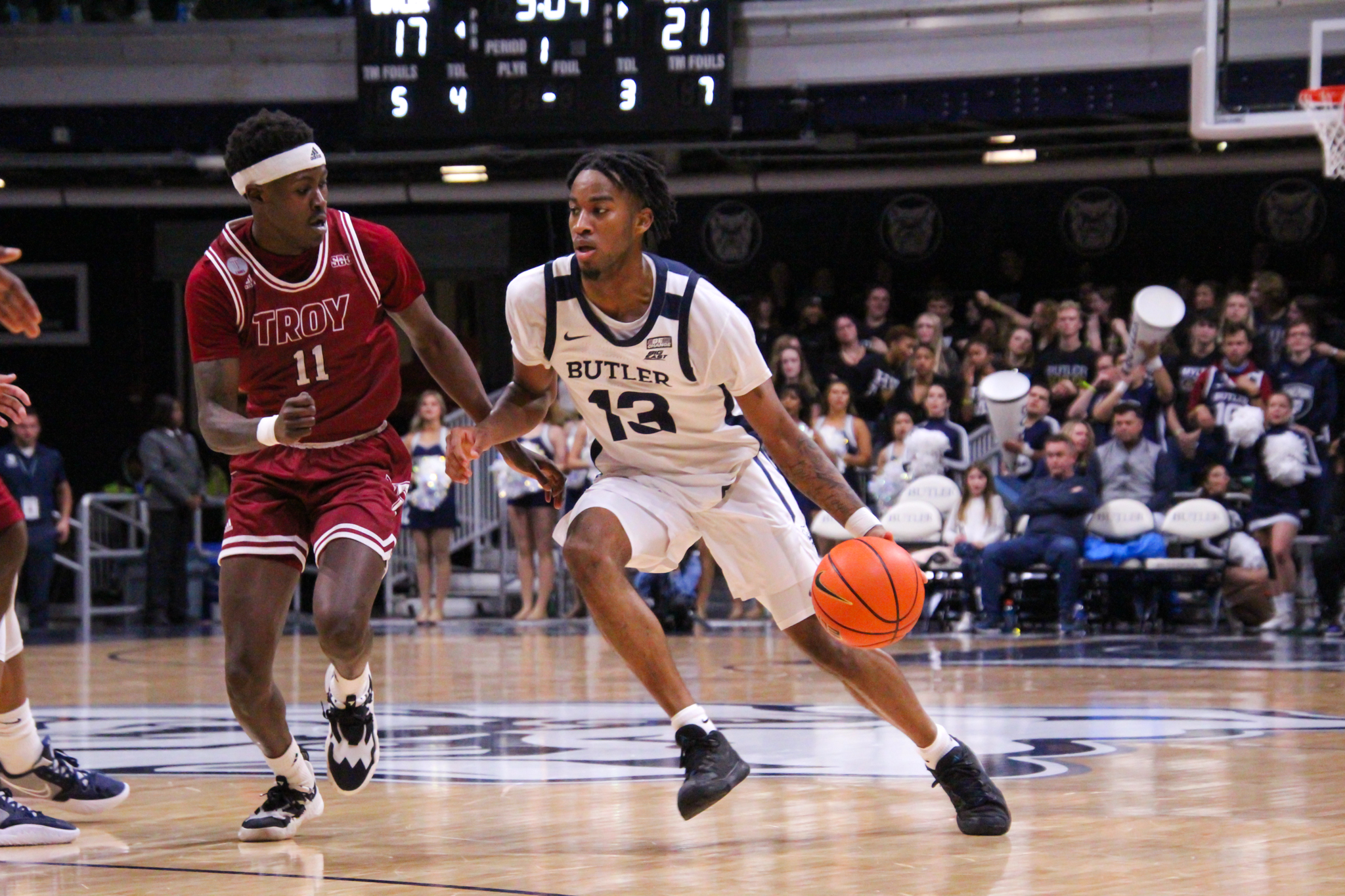 Freshman guard Jayden Taylor drives past a Troy defender in a matchup on Nov. 12. Butler went on to win 70-59. Photo by Claire Runkel.

After winning their first three games, the Butler men’s basketball team seeks their fourth win of the season in what is expected to be one of their more competitive non-conference matchups against the Michigan State Spartans. The Bulldogs will get a boost as graduate student guard Aaron Thompson will be back in the starting lineup. Michigan State, who lost their season opener against Kansas, will be looking to get a quality win in a sold-out Hinkle Fieldhouse.

Here’s what you need to know for the matchup:

Who: Butler vs. Michigan State

Wednesday will be the first game of the regular season for Aaron Thompson. Due to a violation of team standards, Thompson missed the first three games against IUPUI, Central Arkansas and Troy. He is coming back just in time, as the Bulldogs will need his playmaking ability and defensive presence against a talented Michigan State team.

Thompson, who missed the final 11 games of last season with a shoulder injury, is running it back one last time in his final year at Butler. Without a doubt the most important piece that makes the offense go, the Bulldogs will welcome back his passing and ball-handling ability. The Dawgs will also try to limit their turnovers, as they are averaging 15 per game.

With the return of Thompson to the lineup, it will likely mean that freshman Simas Lukosius will start the game on the bench. Lukosius has been struggling with turnovers in his first three collegiate games, leading the team with an average of 4.7 per game. It would be surprising, however, if Lukosius didn’t see the floor at all. He has shown he at least has the potential to back-up Thompson at point guard effectively and his size can provide a different look for the Bulldogs, in this game especially.

Defense will be critical for a Dawgs’ win

Both Butler and Michigan State have been shooting around 49% from the field this season, so this game will likely come down to who makes the most stops.

Defense has been something that the Dawgs have been continually getting better at over the first three games, and they will have to put it all together on Wednesday night. So far this season, they have been holding teams to an average of 53 points per game, 29 points lower than Michigan State is averaging over their first two games.

Like the Spartans, Butler can play deep into their roster, therefore they can give them different looks on defense. They will need to do just that against Gabe Brown, the Spartans’ leading scorer so far this season at 13.5 points per game. At 6-foot-8-inches, Brown is capable of getting hot from outside and has improved his ability to drive to the hoop.

Additionally, forwards Bryce Nze and Bryce Golden will likely have their hands full defensively against Marcus Bingham Jr., Michigan State’s 7-foot forward. Myles Wilmouth — who is 6-foot-9-inches — may be tasked with guarding Bingham Jr. as well.

What to know about Michigan State

Considered one of the “new bloods” of college basketball, Michigan State had a down year last season compared to the success the program has had in the past. The Spartans went 15-13, with their season coming to an end in the first round of the NCAA tournament against Final Four-bound UCLA.

During the offseason, they would lose three of their top five scorers in Aaron Henry, Joshua Langford and Rocket Watts. Henry, who was the do-it-all guy for the Spartans last season and willed them through many of their wins, signed a two-way deal with the Philadelphia 76ers. Langford graduated after a long and unfortunate career riddled with injuries, while Watts transferred to Mississippi State.

This will lead to the emergence of Gabe Brown, Marcus Bingham Jr. and Julius Marble II. Brown will likely be the primary scoring option for the Spartans, while Bingham Jr. and Marble will have to increase offensive production while remaining tenacious on defense in order for them to succeed.

Max Christie, the No. 3 shooting guard in the class of 2025, will be a player to watch in the lineup. The 6-foot-6-inch guard has great shooting and scoring ability with the potential to be a respectable defender as the season goes on. However, in the first two games of the season, Christie has struggled offensively, scoring only 15 total points on 27.5% shooting from the field.

So far, the four games that have happened have come with a bit of surprise. Marquette started it off with a 67-66 win over No. 11 Illinois. Yes, Kofi Cockburn didn’t play, but the Golden Eagles forced 26 turnovers and held the Fighting Illini to one point in the final five minutes of the game.

The Providence Friars were able to defeat the Wisconsin Badgers 63-58 in Madison. The Friars came in as 5.5 point underdogs and — ironically enough — won by 5, with Nate Watson leading the team with 24 points. Also, Creighton defeated Nebraska 77-69 behind Ryan Nembhard’s 22 points and 4-of-5 shooting from three.

The biggest surprise of the four may have been Seton Hall knocking off No. 4 Michigan 67-65 in Ann Arbor. The Pirates hung around all game and hit clutch free throws in the final minute of the game to seal the win.

With the Big East off to a hot start, Butler will try to add to the fun and keep the Big East undefeated against the Big 10 in the Bulldogs’ first big test of the season.