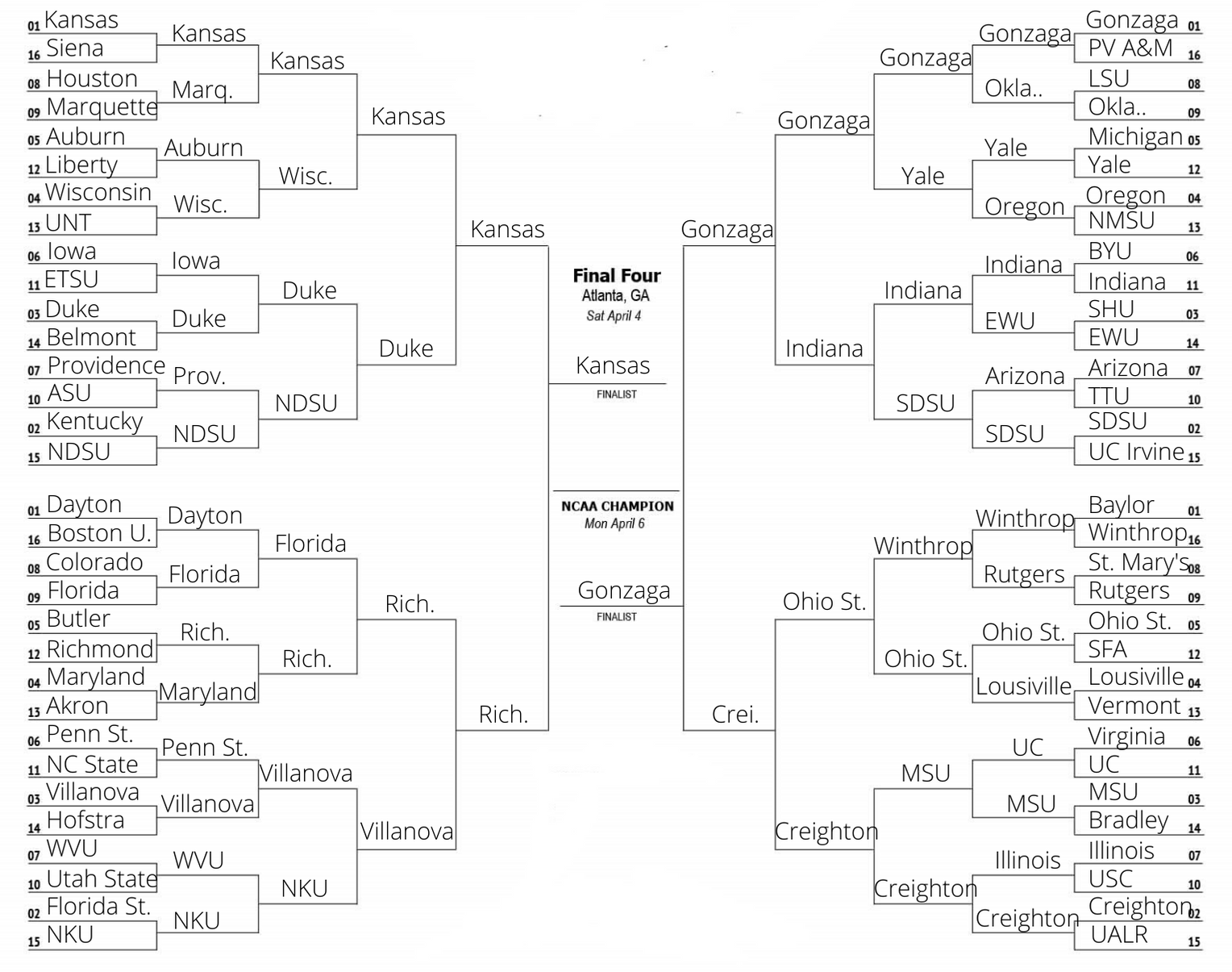 The NCAA Tournament bracket following the Collegian’s simulation of the Final Four. Graphic by Joshua Doering.

The teams have arrived in Atlanta. Media day? Check. Practice in Mercedes Benz Stadium open to the public? Check. The teams are ready to get to play Saturday night for a chance to play for a national championship on Monday night. What a tournament it has been so far, too. Two 15-seeds and a 16-seed made it to the Sweet 16, and yet this is a decently realistic Final Four.

Kansas and Gonzaga were the top two overall seeds in the tournament and despite both getting tested, are here in Atlanta. Creighton boasts a dynamic 1-2 punch on the perimeter and have dealt a share of their own heart-breaking game winners.

Then, there’s Richmond. The Spiders out of the A-10 received one of the last four at-large bids, meaning they would have to play their way into the round of 64. Led by a power trio of their own, they’ve already made history as the first 12-seed or higher to make it this far, but don’t seem content with settling with a Final Four appearance. They’re here to go all the way. Jim Nantz has us on the call. Let’s go.

First up on the docket is Creighton versus Gonzaga. Both religiously-affiliated universities with less than 9,000 students, these teams seem to share more similarities than differences despite being 20 hours apart by road. They both succeed in large part to their high-powered offenses. Gonzaga’s points mainly come from their forwards while Creighton utilizes the perimeter game.

Creighton took down Little Rock, Illinois, Michigan State and Ohio State to appear in their first Final Four in school history. Gonzaga, on the other hand, was in this position not too long ago. The Bulldogs appeared in the 2017 National Championship against North Carolina, meaning this year’s seniors were on the roster for that game.

In fact, Gonzaga senior Killian Tillie appeared in the game, going 0-of-3 from the field and scoring just a single point in the loss. He will look to avenge that on Monday, but he’ll have to get through Creighton first as Gonzaga’s best opponent they faced on this road was a 9-seeded Oklahoma team. They’ll take their best punch tonight. Christian Bishop wins the tip for Creighton and we are underway in Atlanta.

It was experience versus novelty in this one and experts questioned how Creighton would respond to reaching farther than any other team in their school’s history. The Bluejays proved in the opening minutes that they had no fear. Mitch Ballock opened up with three buckets before the first media timeout to give Creighton the early lead. The teams continued to feel each other out in the early part of the first half while Creighton was able to hold a steady five to nine-point lead early on thanks to Ballock and second weekend hero Marcus Zegarowski. However, perimeter shots from Gonzaga’s Corey Kispert kept the Bulldogs within striking distance.

At the midway point in the half, Greg McDermott began shaking up his lineups and it worked out tremendously for the Jays. Buckets from reserves Kelvin Jones and Shereef Mitchell saw the Creighton lead get up to as high as 13. However, Gonzaga was far from defeated. The Bulldogs used more tough shots from Kispert to rattle off a 11-1 run to get right back in this game before the end of the first half. In fact, Gonzaga actually took a lead before the end of the half, but a Ballock jumper at the buzzer knots us up again at 41. Twenty minutes and no blood.

Oftentimes, a quality coach can be judged by how his or her team performs out of a break. Consider Mark Few to be one of those quality coaches. The Zags came out screaming with a collection of baskets from multiple players to put together a 14-3 run to open up a double-digit lead.

However, their most impressive turnaround from half to half was on the defensive end of the court. The Bulldogs suffocated Creighton on that end of the court while they continued to share the sugar on their end to distance their lead further and further as the half went on. By the time the eight-minute media timeout rolled around the Zags were leading 68-52 having outscored their opponent 27-11 in the first 12 minutes. From that point on, Creighton’s energy had been sucked out of them as Gonzaga piled it on to eventually pull away and win, 88-64, amassing an impressive 47-23 drubbing of the Bluejays over the course of the second half.

Gonzaga did what it usually does in the past: quietly dismantle their opponents. Even some casual college basketball fans may not be able to name a single player on this team, but they are no doubt one of the best teams in college basketball and have been for some time. The one thing that has escaped Zags and Mark Few is that national championship. While they missed out on that opportunity in 2017, they no doubt proved in the second half that they belong to fight for a national championship. They’ll get that chance on Monday versus the winner of Richmond-Kansas.

Waiting in the wings is the second matchup of the night, one that is highly anticipated between 12-seed Richmond and the top overall seed in the land in Kansas. Despite all of the low seeds making deep runs in this tournament, Richmond has to come out above all as this year’s Cinderella. Although they received an at-large bid, this Richmond program is far removed from the upper echelon programs in college basketball.

Coming from the A-10, which is definitely not one of the top conferences in the country, the Cinderella label seems right. Richmond defeated Texas in Dayton, then took down Butler, Maryland, Florida and Villanova to become the first 12-seed or higher to make the Final Four. Considering that murderer’s row of opponents, it would be an understatement to say that the Spiders were tested on their way to Atlanta. However, waiting for them is arguably the best team of all in Kansas.

The Jayhawks stomped their way through the regular season with a 28-3 record and took down Siena, Marquette, Wisconsin and Duke in thrilling fashion to make it to this point. Despite being a power in the college basketball world since Bill Self took over the program, it seems disappointing for the Jayhawks to have just one championship under their belt. They’ll look to get that monkey off their back this weekend. Game two of the Final Four doubleheader should be a fun one.

Right out of the gates in this one, each team tried to execute their game plan. The Spiders’ Blake Francis and Jacob Gilyard wanted to get going against Kansas’ tough perimeter defense while KU forced the ball down low to Udoka Azubukie against Richmond’s smaller frontcourt. The tag team of Devon Dotson and Azubukie played well in the early minutes, which allowed Kansas to build an early eight-point advantage in the first half, just for the Spiders to string together some shots and tie things back up again. However, the Jayhawks would put together a run that pushed Richmond back on its heels. Over the course of just four minutes, Kanas blitzed on a 17-1 run to give them a double-digit lead over Chris Mooney’s squad. Jayhawks lead at the break, 46-32.

As you could have guessed with teams that are down in the second half, Richmond had a second fight in them. On four consecutive possessions, the Spiders had two buckets from Grant Golden and two 3-pointers from Blake Francis to propel UR to just a three-point deficit at the under-16 media timeout. Fortunately for Kansas, they have a guard named Devon Dotson. He is good. And the sophomore’s will to win propelled the Jayhawks to push their lead to one that the Spiders could not touch for the rest of the game. Kansas held a 12-to-18-point lead for the rest of the game to coast to win the second game of Final Four weekend, 87-75.

A wonderful story in Richmond ends Saturday night in Atlanta, but the legend of this team will be remembered in Robins Center forever. A time when a trio of players carried this program to its first time in the national stage. However, they ran into an established buzzsaw in Devon Dotson and Kansas, who will be advancing to face Gonzaga on Monday night in what should be a treat of a national game. While none of tonight’s games were nail-biting, down-to-the-buzzer type games, it sets up a championship that could have that type of entertainment value.

Who would’ve thought after all of the chaos and hysteria in the opening weekend that we would see the top two overall seeds in the national championship? It’s blue-blood Kansas and Devon Dotson and Udoka Azubukie against “new blue-blood” Gonzaga with Corey Kispert and Filip Petrusev. Legacies will be immortalized in this game while the loser has to answer more questions about why they can’t get it done in the big game. See you Monday.