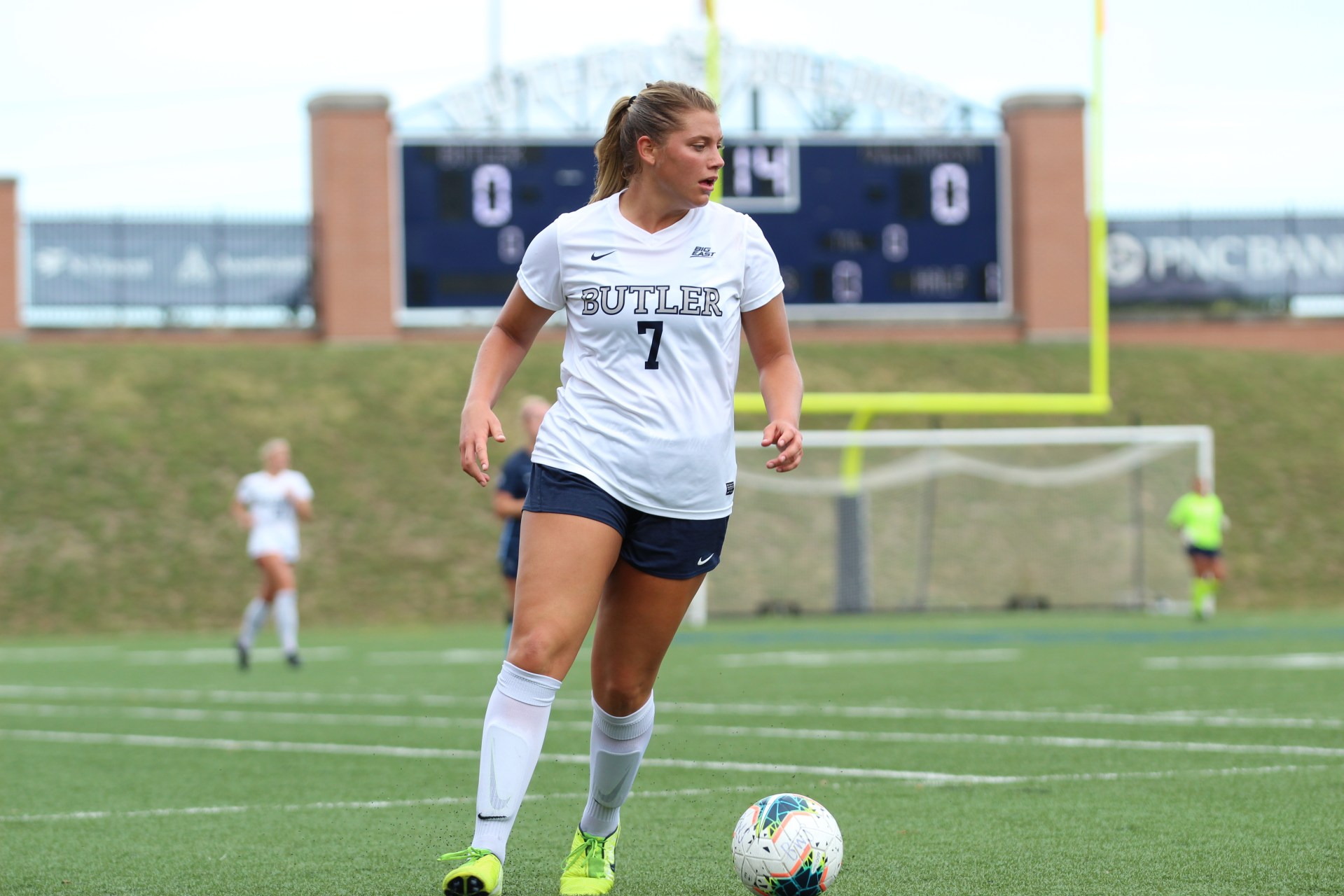 Anja Savich controls the ball during a past game. Savich, the Bulldogs’ leading goal scorer this year, leads Butler into the Big East Tournament starting on Friday. Collegian file photo.

The Butler women’s soccer team finished their regular season with a 6-1 Big East record, their best conference winning percentage since joining the league in 2013. The Bulldogs claimed the top spot in the Midwest Division and will face the UConn Huskies for the first time as conference foes on Friday for a spot in the Big East Championship on Sunday.

UConn, the 2-seed from the East Division, has won four consecutive matches, including an overtime win over Seton Hall in their most recent outing on April 3. The Huskies went 6-2-1 in the Big East this season, their first since re-joining the league in the summer.

Here’s what you need to know as the Bulldogs aim to advance to their fourth Big East Championship match in six seasons.

1. Even in a unique spring season, the Bulldogs have not skipped a beat

Despite being picked to win third in the Midwest Division in the Big East preseason poll, Butler picked up steam early in the conference slate and never looked back. The Bulldogs’ lone blemish in the Big East this season was a 1-0 loss at DePaul, who was picked to finish second in the division. The loss was revenge for the Blue Demons, as the Bulldogs bested DePaul 3-1 in the conference opener on March 4. Xavier, the unanimous favorite to win the Midwest Division, was blasted by Butler on March 14, 4-0.

As for individual accomplishments this season, junior forward Anja Savich led the team in scoring with nine goals on the season, including two in the final regular season match against Creighton. Junior midfielder Katie Soderstrom followed closely behind with five goals and a team-high five assists. Freshman forward Alli Leonard netted five goals as well on just 15 shots this season.

Prior to the season, redshirt junior Stephanie Rodriguez was named Big East Preseason Goalkeeper of the year and she played up to the billing. Rodriguez saved 85% of shots faced this year and recorded five clean sheets.

2. UConn’s first season back in the Big East was a success

After going 2-5-2 in the American Athletic Conference in 2019, UConn and third-year head coach Margaret Rodriguez were not expected to contend in their first year back in the Big East, having been picked fourth in the East Division in the preseason poll. Instead, UConn finds itself in the Big East Tournament behind a strong 6-2-1 conference season, which included taking undefeated No. 12 Georgetown to overtime on March 18.

The Huskies — who scored just 20 goals on the season — were led by reserve junior forward Isabelle Lynch, who netted all four of her goals in the last month. Lynch co-led the team in points alongside senior Yamilee Eveillard, despite Lynch playing less than half the minutes as Eveillard. Sophomore Jessica Mazo also scored twice this year in addition to a team-high three assists.

In the net, redshirt senior Randi Palacios has enjoyed a solid campaign. Palacios has a save percentage of 87.8% and has kept the opponent off the scoreboard six times this season, allowing on average just one goal every three matches.

3. A familiar foe potentially awaits Butler in the Championship

Butler and UConn should be a clash of familiar styles, as each team prides itself on its defense and not allowing the opponent to find the back of the net. The Bulldogs and Huskies have a combined 11 goals allowed this season between them, making every opportunity in Friday’s game a critical one, as these are two of the best defensive teams in the Big East.

Should Butler win, they would likely face the nationally ranked Hoyas in the Big East Championship. The Bulldogs have a history of meeting Georgetown in the final, falling to them in both of the previous two meetings in the Championship match. In 2018, Butler lost, 1-0, at the hands of the then-4th-ranked Hoyas, who would advance to the national semifinals that season.