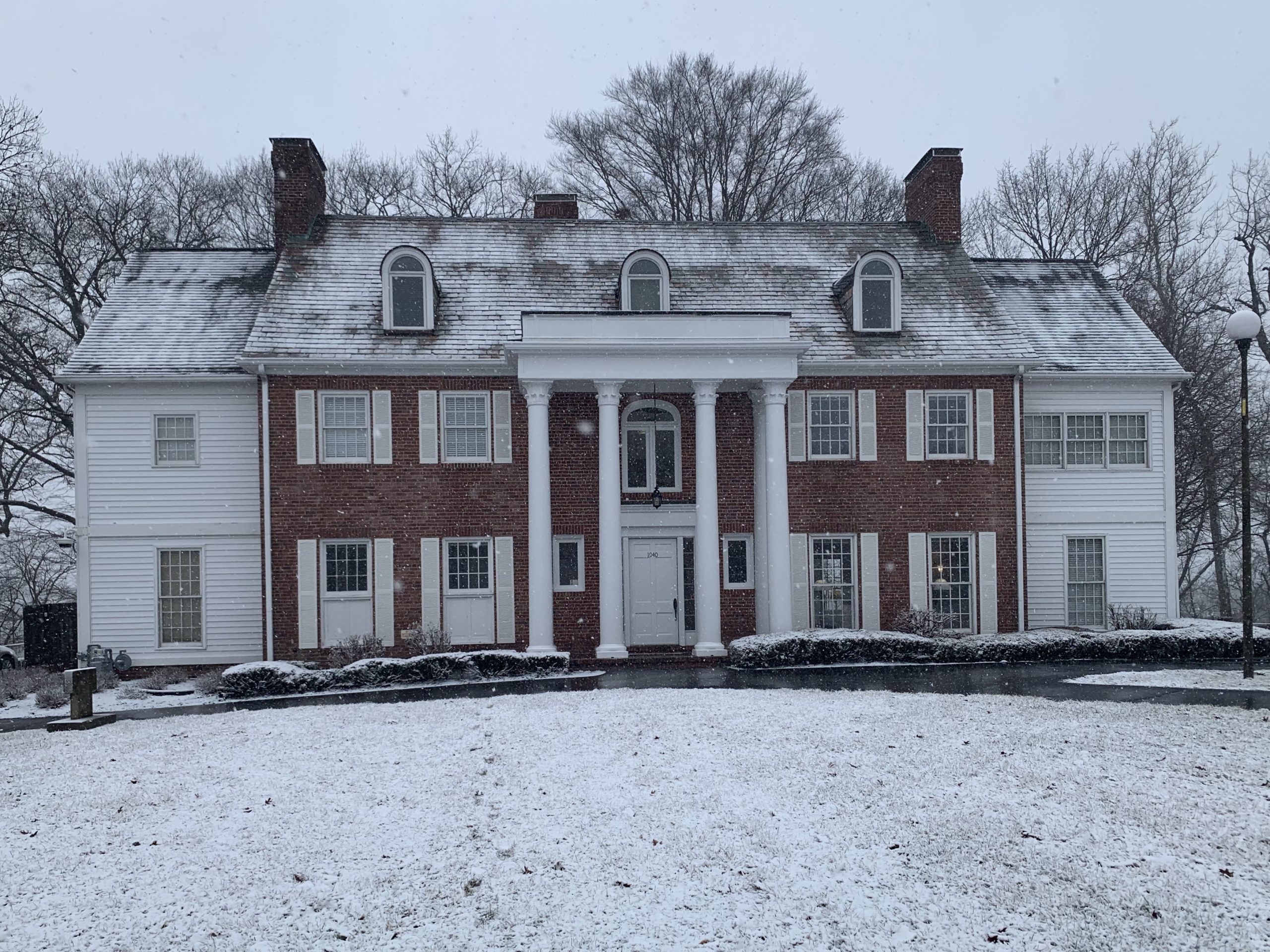 Find out what purpose the big, sprawling mansion on South Campus serves. Photo by Meghan Stratton.

The snowflakes softly wrap the sprawling landscape in a blanket of white. A three-story mansion’s red brick exterior stands out amidst the snowfall, its immense pillars exuding historical endearment.

The English Colonial style home was built in 1929 as a wedding present from J.S. Holliday to his daughter Lucy and son-in-law Perry O’Neal. Thus, it was called the O’Neal mansion. On the 36 acre plot of land, the Hollidays owned four more houses of similar size, and called the mini-town Shooters Hill. In 1950 Alice O’Neal, Holliday’s granddaughter, married famous golf course architect Pete Dye in front of the Hospitality House’s living room fireplace.

However in the early 1950’s, the Dye family moved out of the Hospitality House, and the Tau Kappa Epsilon fraternity moved in. In 1960, three homes in Shooters Hill were bulldozed to make way for the $5 million CTS campus.

After its time as a fraternity house ended, the Hospitality House sat unattended until 1996, when CTS decided to restore the home to provide hospitality for students and guests. The $1 million restoration upgraded the woodwork and windows, as well as updating to modern furniture. The house served CTS students who needed to stay, such as graduate students coming for a week-long intensive program. The house was opened to members of the outside community when Butler acquired the land.

Since their purchase of the property in 2018, Butler’s ongoing renovations of the Hospitality House have included full upgrades of two out of the available eleven guest rooms, and improvements on the front porch and pillars. Sally Childs-Helton, professor in the special collections library, said the university will now open a file with the house’s historical information.

Chandler Swartzell, events manager for the Butler arts and events center, has taken lead on the project since he was an intern with the events department.

“It’s almost like it’s my baby,” Swartzell, a 2018 Butler alum, said. “It’s a way for me to give back to the university — to put my time into something, to take something that was basically handed to us and make something of it. It’s special for me to be able to do that.”

There are nods to Butler spread throughout the house — from the Trip poster in the third floor hallway to the historical photo of Jordan Hall in the living room. In June 2018, Swartzell worked with a team that included university relations associate Bethanie Danko to pull Butler portraits and paintings from an art storage space to decorate the Hospitality House.

The group was assessing the university-owned artwork for a larger art revitalization project. Danko said the group evaluated the art with a specific criteria: historic importance, high monetary value or exceptional aesthetic character, among other attributes.

“In that process, we said to Chandler, ‘Anything that you think would add to the Hospitality House, please just tell us what you’d like and you can take it over there,’” Danko said.

Danko commended Swartzell’s work on the house, and said he did a phenomenal job with the lion’s share of the work.

“I want [the Hospitality House] to feel like it’s always belonged on Butler’s campus,” Swartzell said. “And we’re just trying to bring it up to the Butler standards.”

Swartzell said to not think of the Hospitality House as a hotel, as it is not cookie cutter. Each guest room is different, and the first floor areas are all common area spaces. Highlights include a fully renovated kitchen, a study with historical memorabilia of the Holliday family and a backyard garden with a view that overlooks the White River.

A grand staircase in the front foyer invites guests upstairs to two floors of bedrooms. Nine rooms have twin beds, white two larger rooms have been upgraded to full and queen size beds — the upgraded rooms are more expensive to reserve. Guests can make reservations to stay at the Hospitality House with Butler’s online reservation form.

Swartzell said he hopes the Hospitality House is a welcoming environment for guests, and that staying on campus gives guests “the feel of who we are as a university.”

And there you have it, an answer on the 42nd Street mansion.