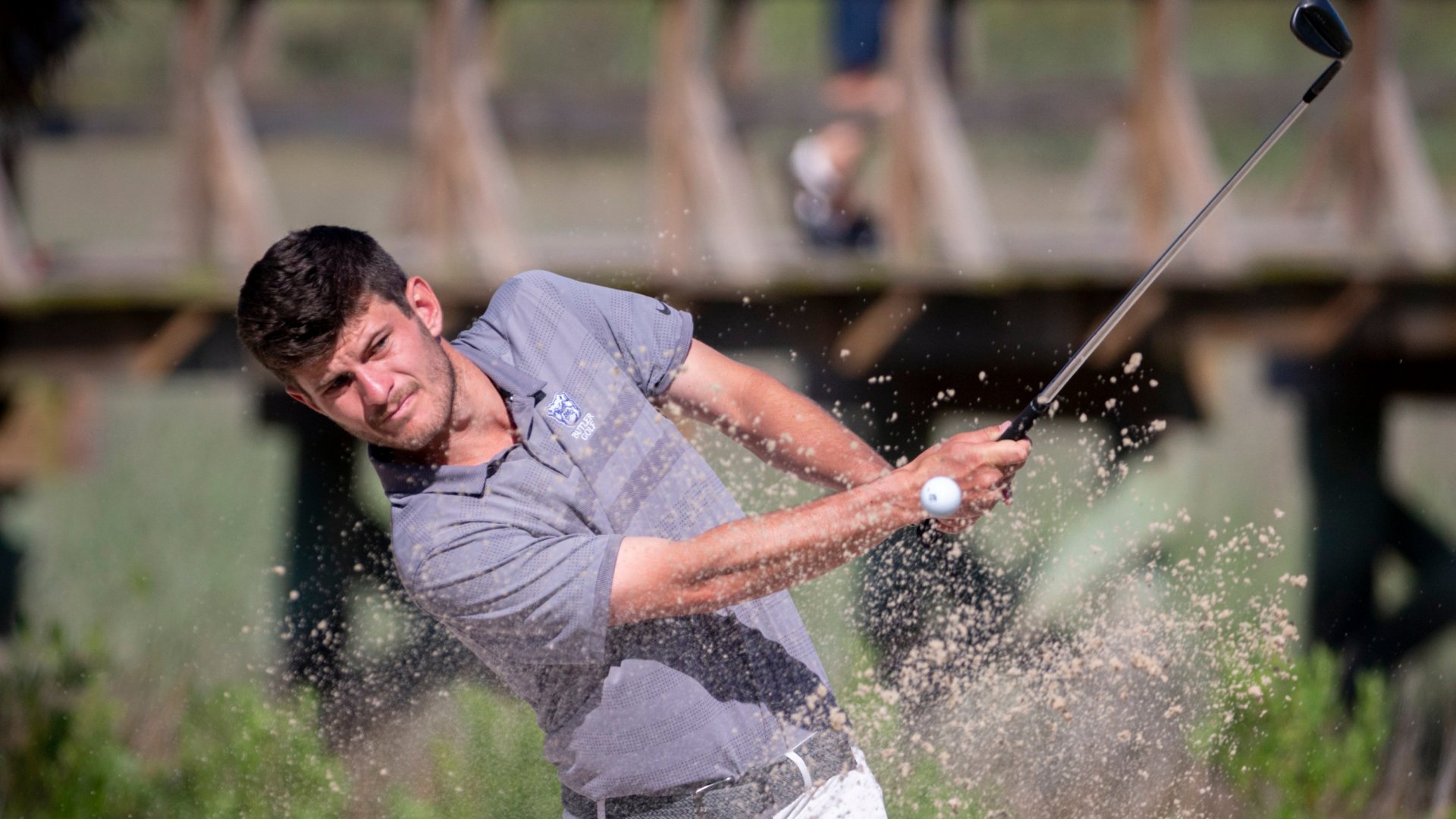 Logan Sabins hits a bunker shot during a tournament in the fall of 2019. Sabins is third on the team in scoring average. Photo courtesy of Butler Golf on Twitter.

With one spring invitational already under their belts, the Butler men’s and women’s golf teams will return to action at the Benbow Invitational in Jacksonville, Florida, from March 9-10. Both teams have spent the offseason preparing and are looking forward to competing in warm weather.

The men’s team competed in its first tournament of the spring season from Feb. 10-11. The Bulldogs finished ninth out of 17 teams at the Orange County Collegiate Classic in Coto de Caza, California. Head coach Bill Mattingly stressed the importance of trying to get better each round and staying focused.

“If you can get them to improve a stroke or two, and work on their short game, which has definitely gotten better, they are all good ball players,” Mattingly said.

Overall, Mattingly said he thinks the Bulldogs have improved in each of those areas. The team has been taking advantage of the indoor training facility located at Highland Golf Course to practice on artificial greens before playing in these outdoor tournaments.

This offseason the team focused on closing out rounds and finishing tournaments strong. The team has been using those goals as big practice points this offseason and putting more competition in the practice setting to simulate tournament play.

Through one spring tournament, Butler is 1-for-1 in that category. At the Orange County Collegiate Classic, the Bulldogs improved in each of the three rounds, ultimately improving by 15 shots as a team from round one to three.

“After the fall season, we met as a team, about what needed to be improved, and the big thing was our short game,” senior Logan Sabins said.

Throughout the season, and at the end of the year, the main focus is the Big East tournament. But until then, the goal is to continue to improve, be more consistent and even try to win a tournament or two.

After the Benbow Invitational and Savannah State Spring Fling over spring break, Butler will host both the Butler Spring Invitational on March 20-21 and the Big Four Classic on April 7. Prior to the Big East Championship May 1-3, the Bulldogs will head to the Wright State Invitational in Springboro, Ohio, April 19-20.

The women’s team also competed in their first tournament of the spring season from Feb. 10-11 in Boca Raton, Florida, where they finished last at the Florida Atlantic Winter Warm-Up.

The team will be headed to Florida to compete in the Benbow Invitational and the Bethune-Cookman Invitational in the same week. Just like most golf teams in the country, the team is looking for increased consistency. After their big win at Dayton in the fall, head coach Christie Cates said the team was able to see how capable they are of competing, and even winning.

As a team, the Bulldogs would ideally like to see no scores in the 80’s, so four scores in the 70’s. Another goal would be breaking a total score of 300, and to just be competitive at every tournament.

The Bulldogs have stressed the importance of short game and emphasized how it’s at the forefront of what they are doing. Their practices are half player-led and half coach-led, which allows them to focus on their short game and the shots with which each player struggles.

Their stats also play a key role for the team. In the fall season, the team averaged a score of 311 throughout their six tournaments. The Bulldogs are last in the Big East in that category and they are, on average, 16 strokes behind Seton Hall, who leads the conference.

“Our stats are really important to us, and keeping good stats was extremely crucial in seeing what we can do to improve for the spring,” junior Katelyn Le said.

Being inside for a majority of their practices also allows them to work on their short game.

The players are itching to finally get to play outside, and they are excited to compete. The team will be playing a lot of golf in a short amount of time over spring break.

“I just want to see them, if they have a bad hole or a bad round, to be able to bounce back from it, you can’t dwell on the past,” Cates said.

The Bulldogs have been placing attention on the smaller details of their game and evaluating their biggest challenges moving forward.

Upon returning from the Benbow Invitational, the women’s team will compete in the Eastern Kentucky Invitational March 30-31 and the Indiana University Invitational April 18-19 as well as host the Big Four Classic on April 7. They will finish their season at the Big East Championship May 1-3.