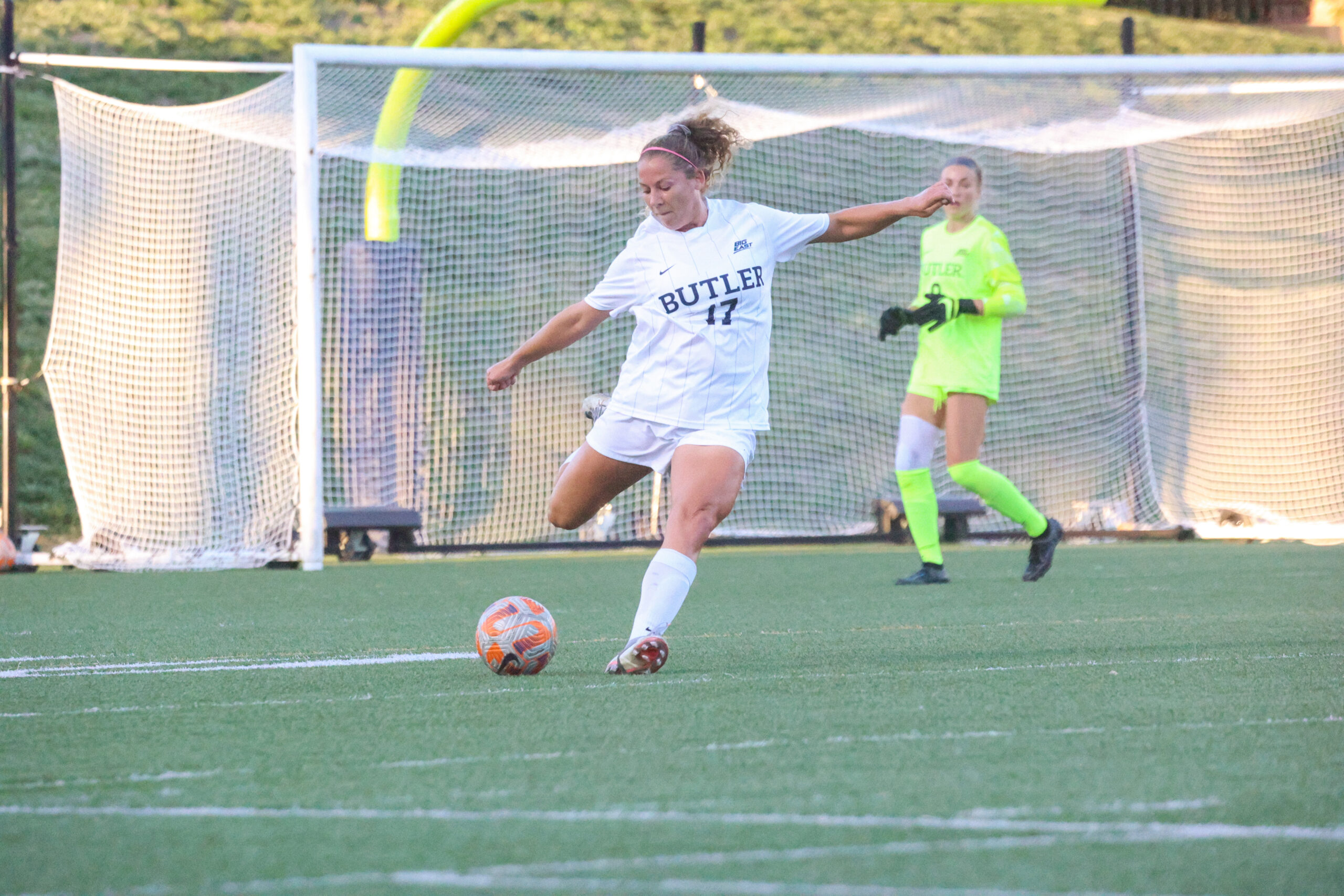 Junior Claire Farrington winds up to kick the ball in their game against Dayton on Sept. 8. Photo by Claire Runkel.

The Bulldogs look to get back in the win column after a tie against DePaul as they take on the Lindenwood Lions. The game is at 7:00 p.m. at the Bud and Jackie Sellick Bowl and will be streamed on FloSports and Butler+.

The Butler women’s soccer team opens Big East play by taking on the Xavier Musketeers. The Bulldogs finished non-conference play with a 2-2 tie against Ball State on Sept. 15. The game is scheduled for 7:00 p.m. in the Bud and Jackie Sellick Bowl and will be streamed on FloSports and BEDN.

The women’s tennis team will open their season by traveling to Muncie, Ind. to participate in the Ball State Invitational. The invitational will be from Sept. 23 to Sept. 24.

Coming off of a disappointing result at the Bulldog Brawl against Central Michigan in which they lost in three sets, the Butler women’s volleyball team travels to Chicago to face off against the DePaul Blue Demons. This will be the first of four straight road matches for the Bulldogs. The match will start at 8:00 p.m. at the McGrath-Phillips Arena.

The women’s tennis team compete in day two of play at the Ball State Invitational.

The men’s tennis team travels to Kalamazoo, Mich. as they look to build upon last year’s success at the Western Michigan Invitational. This invitational will be held Sept. 24 to Sept. 25.

The men’s soccer team travels to Connecticut to take on the UConn Huskies at 7:00 p.m. The Bulldogs are searching for their first win in Big East play after their 1-1 tie against DePaul in the Big East opener. The game will be streamed on FloSports and BEDN.

The women’s volleyball team will play the second of four straight road matches to begin Big East play as they take on No. 19 Marquette. The match will begin at 7:00 p.m.

The men’s tennis team compete in day two of the Western Michigan Invitational.

The women’s swim team starts their season at the Butler Double Duel against Xavier, St. Louis, Valparaiso and IUPUI. The dual starts at 12:00 p.m. in Fishers, Ind.

The women’s soccer team continues Big East play by taking on Marquette. The game is set for 1:00 p.m. at the Bud and Jackie Sellick Bowl and will be streamed on FloSports and BEDN.

The men’s golf team travels to West Des Moines, Iowa for the Zach Johnson Invitational. The Bulldogs are looking to improve from last year’s invitational, in which they finished ninth at +33 for a score of 885. The invitational runs from Sept. 26 to Sept. 27.