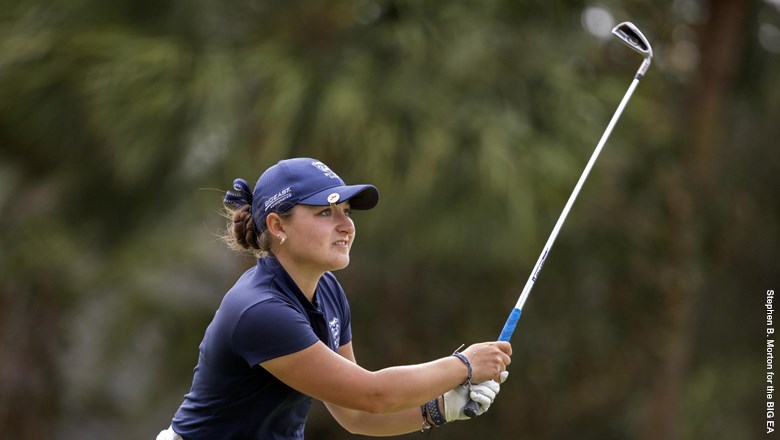 Ally Ross stares down an iron shot in a tournament this season. Ross tied for third individually at the Dayton Fall Invitational. Photo courtesy of Stephen B. Morton/Big East.

Going into the final round on Oct. 15, the Butler women’s golf team held a one-stroke advantage, and was able to come away with a three-stroke victory over the host Dayton Flyers and the University of Findlay. The Illinois State Redbirds were one shot behind Butler after the first 18-holes played on Oct. 14. The Redbirds went on to finish in fourth place.

Junior Ally Ross tied for third individually, matching her Monday round with another three-over 73 Tuesday on the NCR Country Club north course. She finished at 146 (+6). Ross’s round of 73 tied for the second-best score on Tuesday.

Freshman Avery VonDielingen played as an individual and shot an 85 and 77. She finished tied with Bondoc for 46th in the 84-player field.

The Bulldogs will complete the fall portion of their schedule next week at the Charles Braun, Jr. Intercollegiate. The event, hosted by Evansville, will take place next on Oct. 21 and 22 in Newburgh, Indiana.