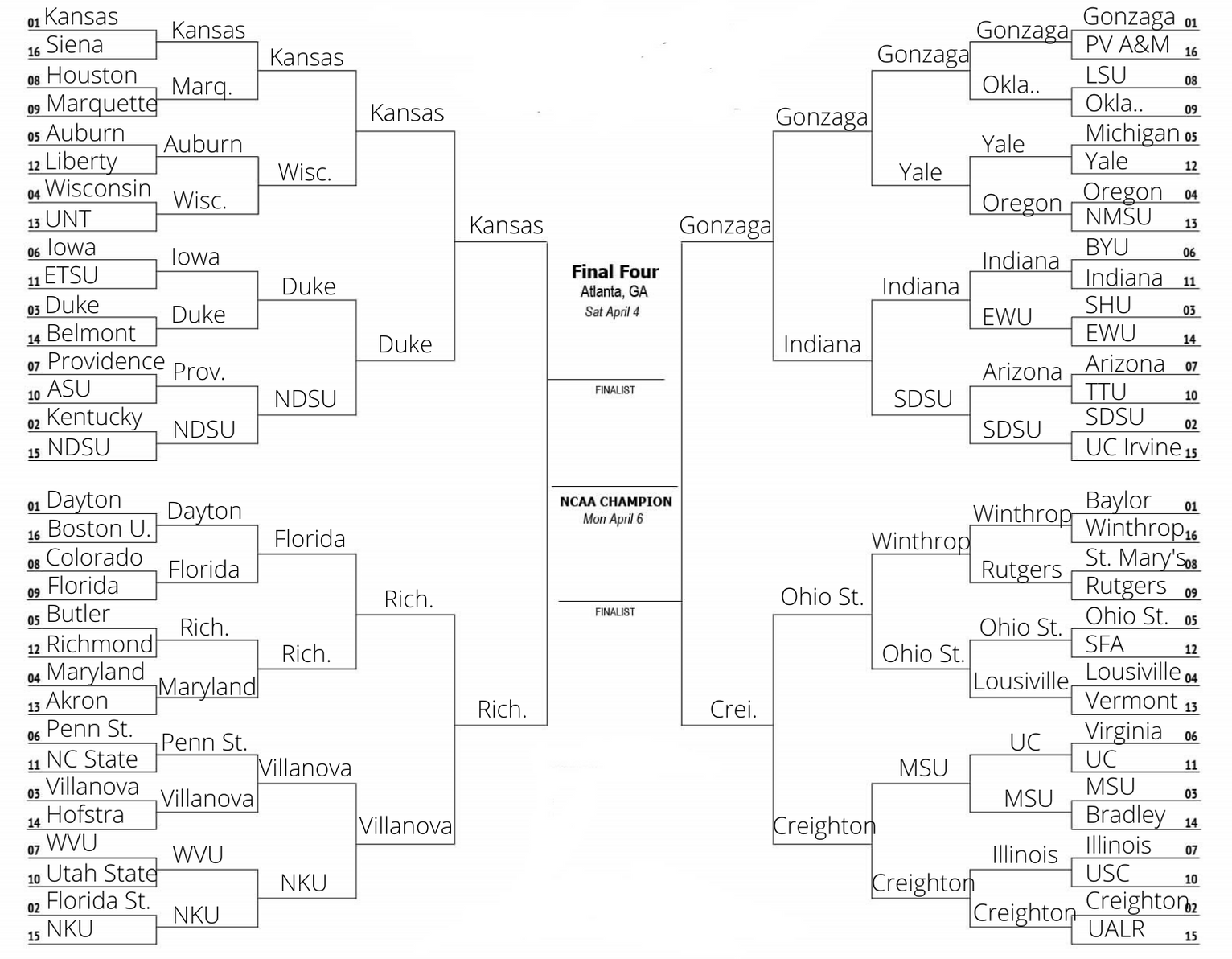 The NCAA Tournament bracket following the Collegian’s simulation of the second day of the Elite Eight. Graphic by Joshua Doering.

Two tickets are punched to next week’s Final Four of the 2020 NCAA Butler Collegian Simulation Tournament. We’ve got two more spots to be filled today to complete the field. After a chaotic first weekend, things have settled into form – aside from Richmond becoming the first 12-seed or higher to make it this far.

No conference has more than one team remaining, these schools are playing for something more than just themselves. Will Ohio State end the Big Ten drought? Will Creighton head to their first Final Four in school history? Let’s go straight to Toyota Center in Houston to find out.

Elite Eight action is about to get underway as either Ohio State or Creighton will punch their ticket to the Final Four in Atlanta to face off against Gonzaga. Neither team is thinking about the Zags yet as Chris Holtmann and Greg McDermott go over final adjustments before we tip this one off.

What does this game mean for these two squads? Ohio State has been removed from the days of Mike Conley, Greg Oden and Thad Matta, but a new coach and a group of twins are going to try to lead them back to the Final Four since Jared Sullinger, Deshaun Thomas and Aaron Craft took the Buckeyes there in 2012. For Creighton, they have never made it this far in the tournament. Even in the days of National Player of the Year Doug McDermott, the Bluejays could never get over that hump. Led by two dynamic guards in Ty-Shon Alexander and Marcus Zegarowski this team looks to blaze its name in the history books in Omaha.

Ohio State toppled Stephen F. Austin, Louisville and Winthrop to get to this point. Creighton toppled Little Rock in the first round and is playing their third-straight Big Ten opponent in this one as they took down Illinois and Michigan State in two thrilling games to be among the final eight teams in the bracket. Let’s tip it off from Houston!

Creighton’s legs did not seem to be under them as soon as we tipped off. Remember, the Bluejays battled Michigan State until early Saturday morning on the east coast to turn around and play in this game 38 hours later. An Andre Wesson jumper pushed the early Buckeye lead to 9-2. Creighton has made it too far in this tourney to let off Ohio State, though. A pair of  Damien Jefferson free throws brought the Bluejays back within a bucket with ten minutes left to go in the frame. Then, Ohio State pushed the lead back to seven, just for Creighton to bring it back within a score. Yes, it’s going to be that type of game. Ohio State held the lead wire-to-wire in the first half as they head into the break up 33-29.

To start the second half, Ohio State held the Bluejays at an arms’ distance. Once Creighton got the deficit to within three points, the Wesson twins would score a couple of buckets to give the Buckeyes some more breathing room again. At the 10-minute mark, Ohio State’s DJ Carton picked up his fourth foul and was forced out of the game. This seemed to be a big tipping point in this game. It is here where Zegarowski went on a 7-0 personal run while this game was close again by the time you could say “Luther Muhammad”. In fact, Zegarowski would score 12 of Creighon’s points by himself; his second 3-pointer of the game tied us all up again. Then, a Wesson would respond. Creighton has still yet to lead in this game. That was until Zegarowski buried another triple to give Creighton a lead they would not lose. Ohio State led for 35 minutes of this game, but none of it matters if you’re not winning at the end of the final minute. Creighton advances to its first Final Four in school history!

After the confetti shower and the distribution of shirts, it’s announced Marcus Zegarowski is named the Most Important Player for the South Region. He did not lead the Bluejays in scoring in either game they played this weekend, but it was the timeliness of his shots that proved his performance greater than anyone else’s. It’s comforting for Creighton fans to know that his game-winner against Michigan State will culminate in at least a Final Four berth. Greg McDermott and the team will shift their focus to Gonzaga, in which this game might be first to 100 points wins. Great basketball lined up for next Saturday, but let’s send it to Indianapolis where two bluebloods will fight for the fourth spot in the Final Four.

Spoiler alert: I could write a book about this game. For the sake of time, let’s not do that. If you’re one to read this, you already know about the programs Coach K and Bill Self have created here. They fight over all of the 5-star recruits and number one overall AP poll rankings. They both have championships to their belt and plenty of their players move on to play in the NBA. They’ve even met in this stage of the tournament before. Malik Newman dropped 32 points in the 2018 Midwest Regional final to sink the Blue Devils. They’re familiar, you’re familiar, let’s go.

From the moment we jumped, you could tell this was going to be a great matchup between Duke’s Tre Jones and Kansas’ Devon Dotson. Dotson made sure his presence was felt early on as he scored eight points by himself in the first eight minutes of the game. Jones was no slouch, though, as he knocked down contested perimeter shots to keep the Blue Devils in the game early on. Moving towards the end of the half, Kansas started using its size and depth against Duke as McCormack and Azubukie played the “whoever” defense on Matthew Hurt, scoring at will. Kansas led 41-32 at the break.

As we’ve seen so far in this tournament, good teams who are down at half fight like hell to open up the second half to get back in it. Duke did not do that. Ochai Agbaji stepped up for the Jayhawks, knocking down three shots in a stretch to put KU up 54-42. Remember this score. Duke would explode from shots from Jones and Cassius Stanley to the tune of a 15-4 run to get them right back in the thick of things with less than ten minutes to go in this one.

The teams traded buckets for an intense seven-minute stretch that did not see Kansas give up the lead. That did not hold true for the rest of the game, however, as a pair of Vernon Carey free throws gave the Blue Devils their first lead – 69-68 – since it was 6-5. The lead didn’t last long as a Doston and-one catapulted the Jayhawks back into the lead with two minutes to play.

Let’s dedicate an independent section to the final two minutes of this one. Matthew Hurt knocks down two free throws to tie us back up at 71. A few seconds later, David McCormack picked off an errant pass from Wendell Moore. In transition, Dotson to Isaiah Moss for three… yes! Jayhawks lead 74-71, just over a minute to go. Coach K runs a play that gets a wide open dunk for Moore. 74-73 KU. Dotson’s floater is no good on the other end. Duke’s Jones gets a screen set, Dotson goes under, Jones fires… yes! Big time 3-pointer from Tre Jones. Duke takes the lead 76-74.

On the ensuing possession, KU dumps it down to McCormack who shoots a hook shot… it’s good! Tie game with 17 seconds to go. Duke wants to take this down to the end. 5..4… Jones fires to DeLaurier who’s shot is off! Azubukie clears it as three players turn to the ref to call timeout.

The clock reads 2.4 seconds. Jayhawks need to go the length of the floor. Isaiah Moss inbounding. He fires it to the top of the opposite key. Azubukie jumps and catches, it’s the Bryce Drew play! Dotson comes sprinting up the left side of the floor. Azubukie flips the ball to him. Dotson takes one dribble and a running, one-foot runner for the win… HE BANKED IT HOME! IT’S GOOD! KANSAS STUNS DUKE AT THE BUZZER TO RETURN TO THE FINAL FOUR! Dotson is swarmed. Indy is electric! Now this! This is the game of the tournament!

After the hysteria calms, it’s announced Devon Dotson is the Most Important Player of the Midwest Region. Duh. An instant classic between two great guards, teams and programs, this is one to remember. Kansas will join Richmond, Gonzaga and Creighton in the Final Four in Atlanta next week. Bill Self remembers these First Four teams all too well as VCU knocked off the Jayhawks in route to their Final Four appearance in 2011. Expect Kansas to come prepared next Saturday and to not take the Spiders lightly. Oh, and Bill Raftery delivered some awesome “Onions” and “With a kiss”es. What could top this?

Who predicted this group of four?! One will hoist the national championship trophy eight days from now. We’ll talk to you again in six to recap the national semifinal games to see who will get that chance to be immortalized in college basketball.