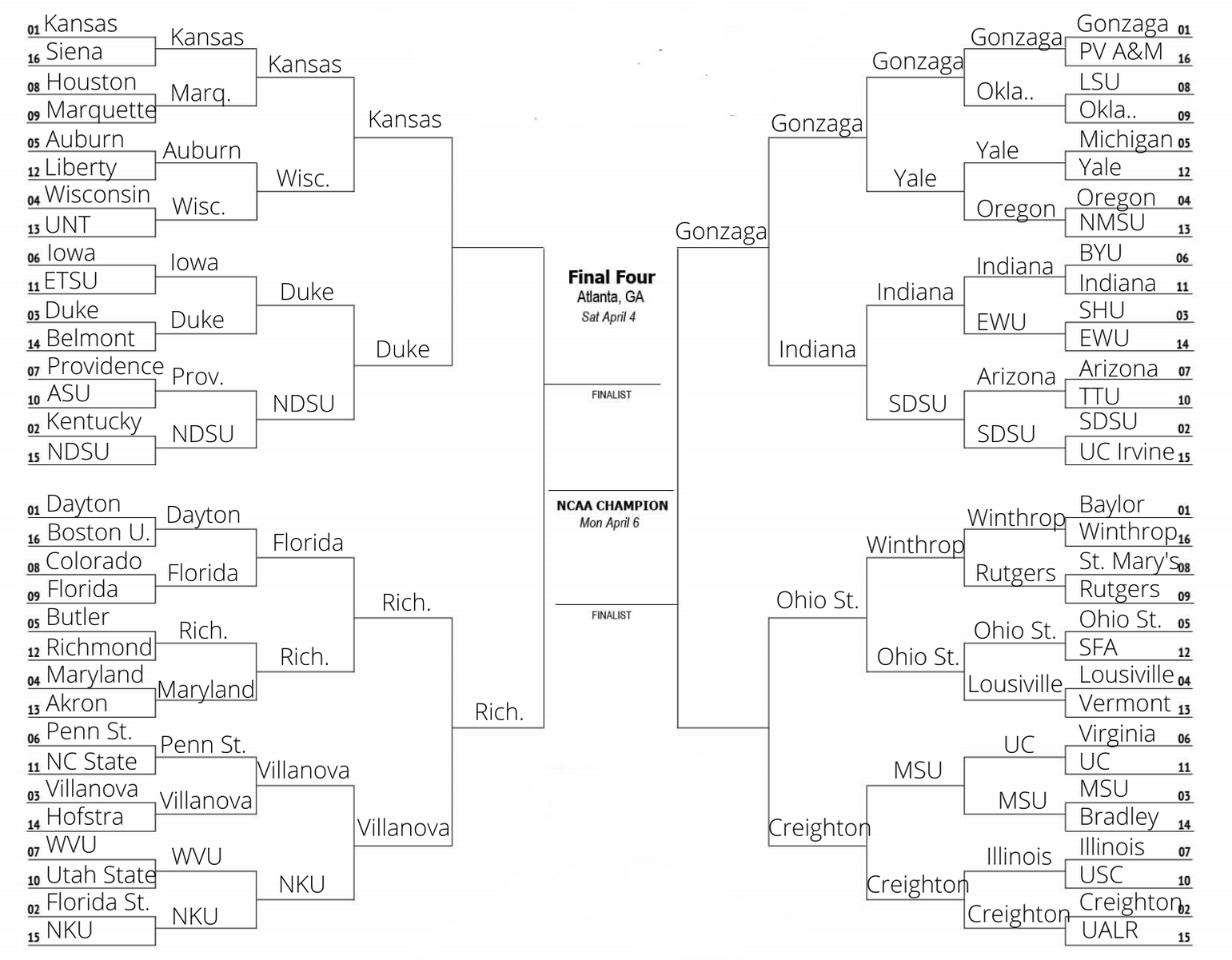 The NCAA Tournament bracket following the Collegian’s simulation of the first day of the Elite Eight. Graphic by Joshua Doering.

The Elite Eight is set. Teams only need three more wins to bring a championship back home to their school. However, that’s easier said than done as some of the best basketball teams in the country remain. One thing I found interesting of note: seven out of eight teams have a direct connection to Butler basketball.

Let’s see who will extend their stay in the Big Dance yet another weekend, to get to a place those players will never forget. First in Madison Square Garden.

Heading into this Elite Eight matchup between the Richmond Spiders and the Villanova Wildcats, there were little outside of the Spider faithful that actually believed that this would be a game. Jay Wright and his Wildcats come into this matchup having won two out of the last four national championships, while Richmond is seen as a Cinderella despite being an at-large.

The Spiders were one of the eight teams that had to play into the round of 64 and they find themselves here as the one of the final eight teams remaining. They have a blueprint, though, as VCU in 2011 was the first and only team so far to make a run to the Final Four who started in Dayton. However, Richmond is going to try to break into uncharted territory tonight. Many 11-seeds have made the Final Four – including that VCU squad – but the Spiders would be the first 12-seed or higher to make it to the final weekend of the tournament.

Jeremiah Robinson-Earl won the tip for the ‘Cats, but it was Richmond that used an aggressive and fearless playstyle to catch Villanova on their heels. It was no secret that the Spiders relied on their trio of Blake Francis, Jacob Gilyard and Grant Golden to take them to the promised land. The group combined to score the first 17 points of the game for Richmond, pacing their team to a slim lead early in the first. A Collin Gillespie 3-pointer later in the half would knot us up at 23. The hungry Spiders would pick up where they left off, though, with a 13-5 run capped by more buckets by Francis, who had 12 points in the first half. Richmond leads 36-28.

In the second half, Villanova proved they were not going to let the Spiders run away with this without a fight. A Cole Swider tipin brought ‘Nova back within four as their fans from nearby Philadelphia began to grow louder over the blue and red of Richmond. Blake Francis was playing hero ball, though, as a pull-up transition 3-pointer put the Wildcat fans right back in their seats. Over the course of the half, Francis and Gilyard would sink timely shots again and again as the Richmond defense swarmed the struggling Wildcats.

Villanova finished the game with 16 turnovers and shot just 36% from the field. At one point the Spiders led 59-41 and New York knew what was coming. A record was about to be broken. As Villanova hit a useless 3-pointer at the buzzer, Nathan Cayo threw the ball in the air as Richmond mobbed Chris Mooney, the Spiders’ head coach who was in his 15th season with the program. The Richmond Spiders’ magical run continues. They’re going to the Final Four in Atlanta!

In retrospect, Richmond barely seemed to break a sweat in the second weekend’s games in New York. They created a sizable lead before halftime on Thursday versus against Florida and did the same against Villanova tonight. In the least bit surprising news of the weekend, Blake Francis was named the Most Important Player of the East Region, as the junior guard scored 39 points this weekend, but it was the timeliness of his shots that will make his performance this postseason remembered in Richmond for a long, long time.

Richmond gets their shirts and they cut down the nets as it all starts to set in that this is all really happening. David is slayed, the Spiders are moving on to the national semifinal where they’ll play Goliath yet again versus the winner of Kansas-Duke from Indianapolis. One ticket punched, but it was the team no one could have guessed before this all started. This is March!

From one high-seeded team to the next, Indiana looked to join Richmond in the Final Four. Like the Spiders, however, that would be easier said than done. Gonzaga has only lost two games so far this season and are the highest scoring team in the country on the backs of SIX players who average double digit points per game. While they’re largely unknown by the most casual of college basketball fans due to their play in a non-power conference that tips games as the east coast hits the pillow, the Zags are dangerous. However, they faced a unique situation as they face an 11-seed that overpowers them in the media attention they are getting in this game.

The Hoosiers sputtered throughout Big Ten during the season but strung together enough games to squeak into the tournament. After wins over BYU, Eastern Washington and San Diego State, IU finds themselves playing their fourth-straight west coast team. This time, though, the stakes are higher than ever, and the opponent is the best that they’ve faced. Let’s get to the action from Staples Center.

While Gonzaga and Indiana played close in the first five minutes, it was evident that it would take a Herculean effort for the Hoosiers to deal with Gonzaga’s size. The Bulldogs’ 6-foot-10-inch Killian Tillie and 6-foot-11-inch Filip Petrusev gave Indiana’s frontcourt all it could handle in the opening minutes as the duo combined for five of the Zags’ first six baskets of the game. It was clear that Mark Few’s game plan was to attack this IU defense down low on the blocks and force the defense to foul.

However, the Hoosiers would counterpunch. The cream and crimson had been winning these games without any one player scoring much more than a dozen points. This game would be different. Forward Justin Smith recorded three baskets around the rim early to keep the score close. As we know, basketball is a game of runs, and Gonzaga had their’s first, going on a 20-7 run over a five-minute span to open up a double-digit lead. As per usual, Indiana counterpunched. A 13-2 run brought the Hoosier deficit to just three at the break, 41-38.

Out of the locker room, the Zags quickly sprinted out in front, but you know the drill. Indiana would respond and actually take the lead over the Bulldogs with seven minutes on the back of a very tough 3-pointer from Devonte Green. Mark Few had seen enough as the Hoosier fans that had traveled all the way to Los Angeles rose to the occasion to support their team. After the timeout, the Zags noticeably increased their efforts on the defensive end, and it showed on the court. Indiana only scored just seven points over the final five minutes of this one as Tillie and Petrusev ended this one the same way they started it: pouring it on the Hoosiers’ front court.

With the Bulldogs’ starting five on the floor, Gonzaga sprinted out ahead by double digits in the blink of an eye and pulled out the victory in the end. While it’s not quite as exciting as a double-digit seed extending its stay in the Big Dance, this Zags team has been a joy to watch over the course of the tournament. Their offense runs like a clinic as they’ll reach their second Final Four in program history, hoping to finish this one off with a championship in Atlanta.

Killian Tillie was announced Most Important Player of the West Region as the super senior led GU in scoring in both games this weekend. Having started his career as a freshman with a run to the championship game – a loss to North Carolina – he looks to cap it off right this time. He’ll turn his focus to the Zags’ matchup in the national semifinal versus the winner of Ohio State and Creighton. A fast-moving yet controlled, methodical buzzsaw, beware of the Bulldogs in Atlanta.

While there weren’t any insane buzzer beaters Saturday in regional final play, there were two notable tickets punched. These teams don’t come from the six “Power” conferences in college basketball that are built on blue-collar recruits that come in and work on their development throughout their four years. In these recent years of one-and-done superstars, it is refreshing to see that good recruiting, development and coaching still pays dividends come March. A 1-seed moves on to the Final Four: you expected that. The 12-seed Spiders from Richmond, now that is March Madness. Tune in tomorrow to see what two teams will join the Zags and Spiders in Atlanta.