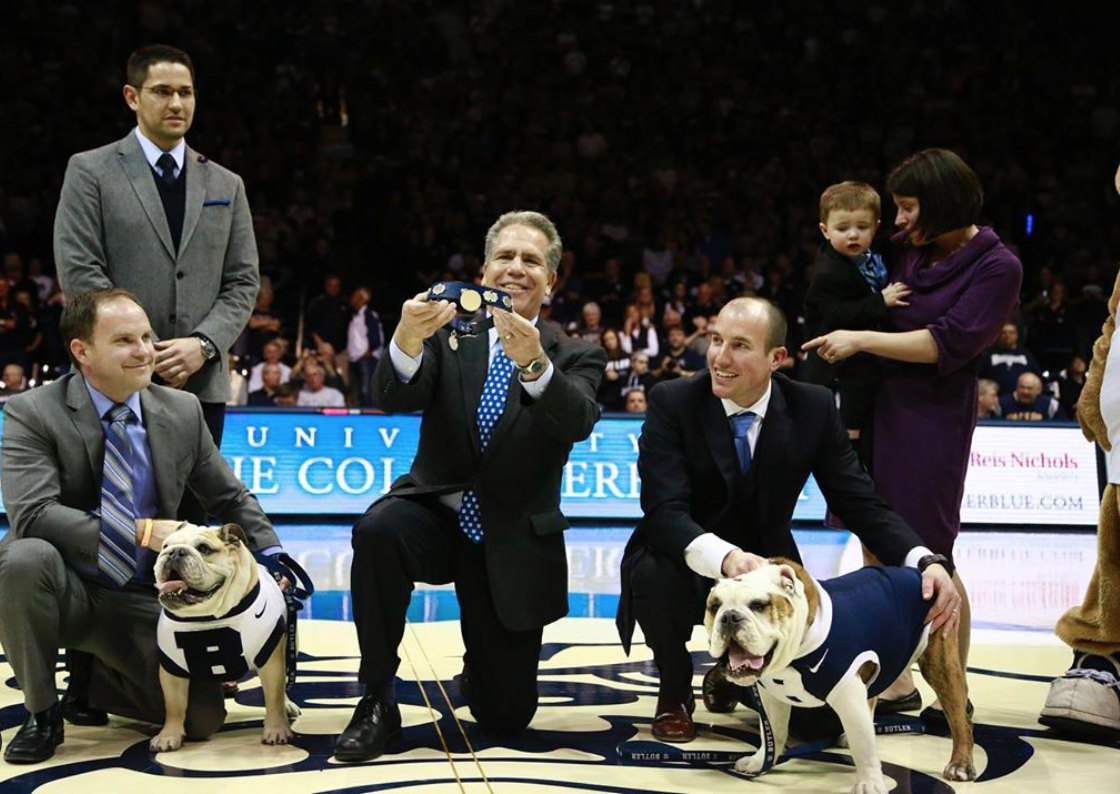 Only the best for Butler’s beloved bulldogs. A ceremonious blue leather collar, embellished with sterling silver plaques bearing the names of former and current mascots, is the center of attention at the symbolic “changing of the collar” ceremony.

But something students may not know is that the collar is insured by their fellow Butler peers — at a value of $9,200.

On Feb. 29, during the Butler men’s basketball game, the traditional “changing of the collar” ceremony will take place. The iconic collar will be taken off of Butler Blue III, or Trip, and placed onto the new live mascot Butler Blue IV, or Blue. Don’t worry about seeing less of Trip though, as he will continue his mascot duties through the rest of the school year.

Captive Insurance Company, a student-run insurance group, was created in 2017 as an elective for risk management and insurance majors. The group provides hands-on experience for students, as well as supplying actual insurance for various Butler University artifacts, including the Butler Blue’s collar.

The company began insuring the one-of-a-kind collar in 2017, where both Captive and Butler agreed on the value of $9,200. The only conditions that Captive has on the use of the collar is that it must be kept in a secure place when not in use.

Taylor Mogged, a senior risk management and insurance, and marketing double major, is part of Captive and believes that it makes the most sense, financially, for Butler to be using Captive rather than a third party.

“[The collar] is financially stable, so in other markets it would increase the price depending on the market,” Mogged said. “Since we insure it at Butler we can decide the price, so it’s cheaper and a stable price throughout the years.”

“It was certainly convenient, but most of all I think it’s a great opportunity for us to provide hands-on experiential learning opportunities for our students,” Kaltenmark said. “This is what they do, this is what they specialize in. I’m of the opinion that if we did have to go outside and use a third party, we probably would have to pay a higher premium and jump through more hoops.”

The collar and subsequent ceremony was created in 2012 by Kaltenmark when Butler Blue II retired.

“I dreamed up this idea of a changing of the collar ceremony, and I decided we should do it in conjunction with the men’s basketball game and really it kinda grew in concept from there,” Kaltenmark said. “I started doing research and working with the local partners in town and I found a really nice sturdy blue leather collar with some studding on it that I thought we could use.”

Andre Vanbergeijk, Reis-Nichols jewelry designer and craftsman, said that designing the collar took about a month. After the collar’s creation, Reis-Nichols donated it to the university.  The unique design allows for detachable plaques engraved with each mascot’s name. Blue IV’s name underwent the engraving on Feb. 25.

“We’re very proud of being a part of Butler University and making that a special part of their program and their mascot,” Vanbergeijk said. “We met both the dogs when we presented the collar and that was a lot of fun. We greatly enjoyed the experience.”

The collar itself is blue leather, but features several sterling silver pieces including a large blue medallion with the Butler logo on it.

The detachable plaques feature the university seal, athletic logo, Butler Blue logo and the names of each mascot that it has adorned. Its inscription reads: “This collar is dedicated to all bulldogs that proudly serve as the official Butler University mascot. May prosperity and good health be bestowed upon all dogs granted the honor of wearing this collar.”

This is the first installment of The Butler Collegian’s “Insured:” mini-series, which will highlight various Butler items insured by Captive.