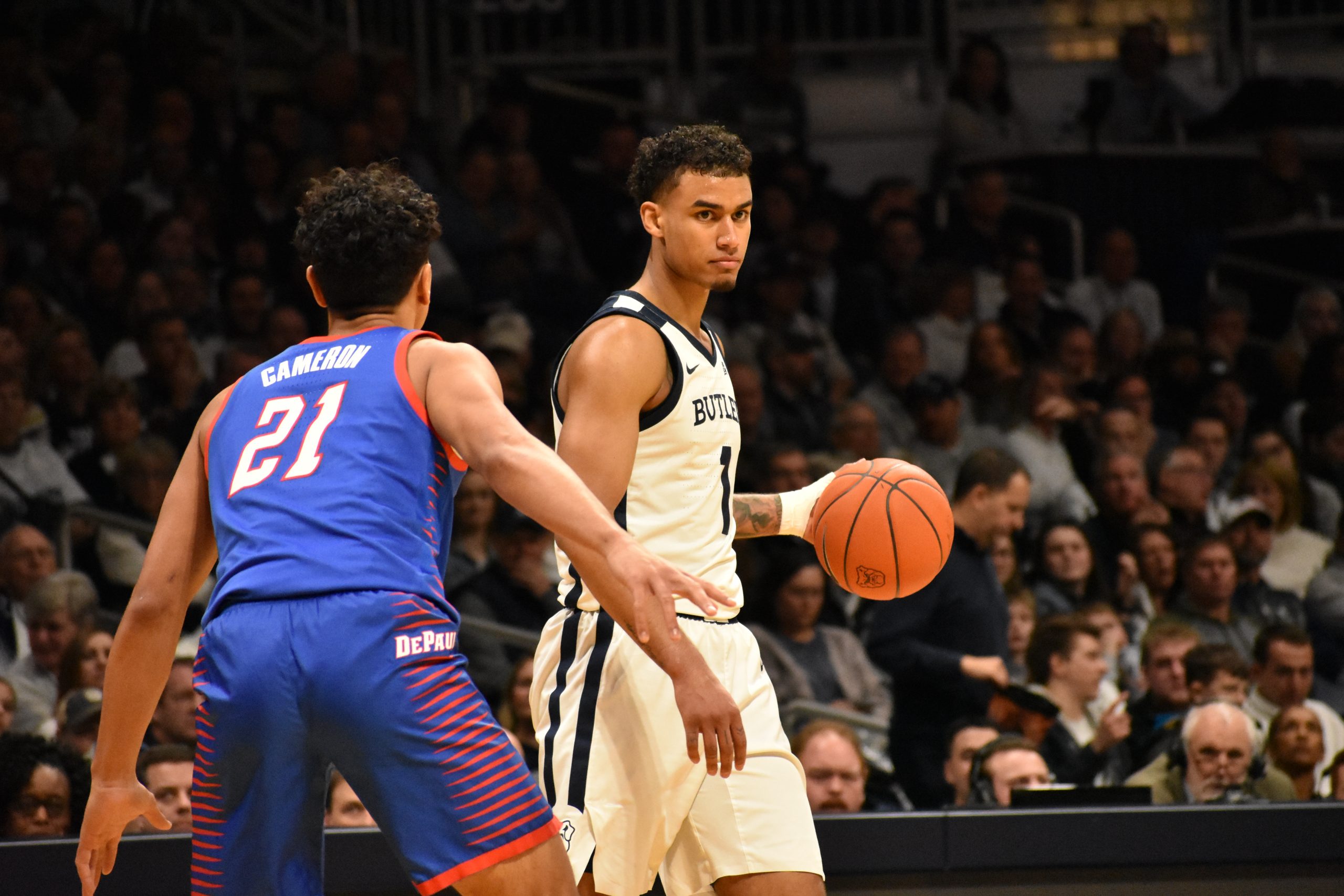 Jordan Tucker eyes the defense against DePaul on Feb. 29. Tucker finished with 13 points in Butler’s 60-42 victory. Photo by Donald Crocker.

After sitting on a three-game losing streak for a week, the Butler men’s basketball team ended their skid with a 60-42 win over the DePaul Blue Demons on Feb. 29.

After a few weeks of less-than-stellar defensive performances, the Bulldogs showed up on that end of the floor. The Blue Demons were 18-of-54 from the field and went 1-of-12 from beyond the arc — the only triple they hit was with 20 seconds left in the game.

It wasn’t the most spectacular offensive performance of the season from the Bulldogs, but Butler got timely threes, especially in the second half, to break down DePaul’s zone and run away with a victory. Jordan Tucker had a solid game off the bench scoring all 13 of his points in the second half. All four of his field goals came from beyond the arc.

Butler is now 20-9 overall and 8-8 in Big East play. Let’s go beyond the box score of a game that Butler controlled from the opening tip.

1. Butler finally got off to a good start. It had been a while.

Early in the season, the Bulldogs had done such a good job jumping on teams early. They were rarely playing from behind, allowing them to dictate the pace of the game and force their opponent to do what Butler wanted to do. Recently, that hasn’t been the case. In Butler’s last five games — in which they went 2-3 — the Bulldogs led at the 13:00 mark of the first half just once. That only lead was a slim four-point lead on the road at Seton Hall. They let Georgetown come into Hinkle and dictate the game early and Creighton hit them in the mouth really early.

Against DePaul, the Bulldogs were active and knocked down shots early which isn’t surprising after sitting on a three-game losing streak and a week of rest.  After the Blue Demons scored the first two points of the game, Butler scored 13 straight and never looked back. The score was 16-4 at the 13:28 mark, Sean McDermott already eight points including two trifectas and DePaul turned it over four times in four minutes.

Setting the tone is important for every team, but it’s especially important for Butler. The Bulldogs don’t like to get up and down. They are last in the Big East in adjusted tempo and 340th in the country in the category. In and of itself, that’s not a bad thing, especially when Butler has the halfcourt defense that it does. However, the Bulldogs aren’t built to come from behind and oftentimes have droughts on the offensive end like they did tonight late in the first half.

The quick start allows Butler to play at their pace, slow it down and work late in the shot clock on the offensive end. Not to mention, playing with a lead is much easier than always trying to make up ground.

2. Butler’s defense was much better, especially on the perimeter.

The numbers speak for themselves. DePaul made just 33% of their shots, turned it over 17 times and Butler forced 11 steals. Butler’s defense was really solid from the opening tip. Yes, the Blue Demons were without arguably their best player, Paul Reed, who sat out with a hip injury suffered against Xavier, but that turned DePaul into a smaller team with more movement and, in theory, more looks from the perimeter.

More specifically, Aaron Thompson and Kamar Baldwin were phenomenal on DePaul’s perimeter players. In the first matchup between these two teams, Jalen Coleman-Lands had his best game of the season scoring 20 points, knocking down three 3-pointers and getting to the line 11 times. Tonight, Coleman-Lands finished with six points on 2-of-8 shooting and he also committed four turnovers. He was 0-of-3 from deep and only went to the free-throw line twice.

Similarly, Thompson shut down Charlie Moore even more so than he did a month ago in Chicago. Moore, who is averaging 15.6 points and 6.4 assists per game, was virtually non-existent. The junior took 12 shots and made just three, had zero assists to three turnovers. It’s no coincidence that two of Moore’s three worst Big East performances came against the Bulldogs. Thompson was elite on the defensive end tonight.

Head coach LaVall Jordan and his staff were worried about the 3-point line against the Blue Demons and the absence of Reed makes DePaul a more slippery team with a smaller lineup on the floor. Not only did they hold DePaul to almost nothing from deep, they defended without fouling, sending the Blue Demons to the line just eight times. Butler’s defense was up to the challenge and held DePaul to the lowest point total of a Butler opponent during conference play.

3. Jordan Tucker had a big second half against the DePaul zone.

Jordan Tucker has come to terms with his status as a sixth-man this season. We’ve seen it on the defensive end and we saw it on the offensive end again tonight. DePaul went to a zone for the majority of the second half and Tucker nicely positioned himself in the openings from beyond the arc. Tucker finished with 13 points, all 13 coming in the second 20 minutes. He converted a 4-point play, bailed the Bulldogs out of a poor possession with a deep one at the end of the shot clock and also knocked down a couple of the ones he was supposed to.

Tucker’s contributions in the second half kept DePaul at arm’s length. Despite poor perimeter defense from the Blue Demons, Butler’s shots weren’t falling early in the second half. As a result, Butler’s lead was just seven four minutes into the second half. Then Tucker had his four-point play, then Tucker knocked down back-to-back three’s to get the lead to 18. Tucker was exactly what Butler needed against the DePaul zone and he provided a spark off the bench.

More importantly, the Duke transfer got out of his slump a little bit. In the last five halves of basketball, Tucker was 2-of-14 from the floor scoring just five points in that time span. Then he knocked down a three after halftime — his first since Butler’s loss at Seton Hall — and added three more. Butler’s offense needs Tucker to be consistent off the bench. Tonight, he was that and it needs to continue as the regular season comes to a close.

“…may good health and prosperity be bestowed upon all bulldogs that have and will wear this collar.”

I like the sound of that. Let’s do this, Bulldogs. #GoDawgs pic.twitter.com/3hbbiMEqWg