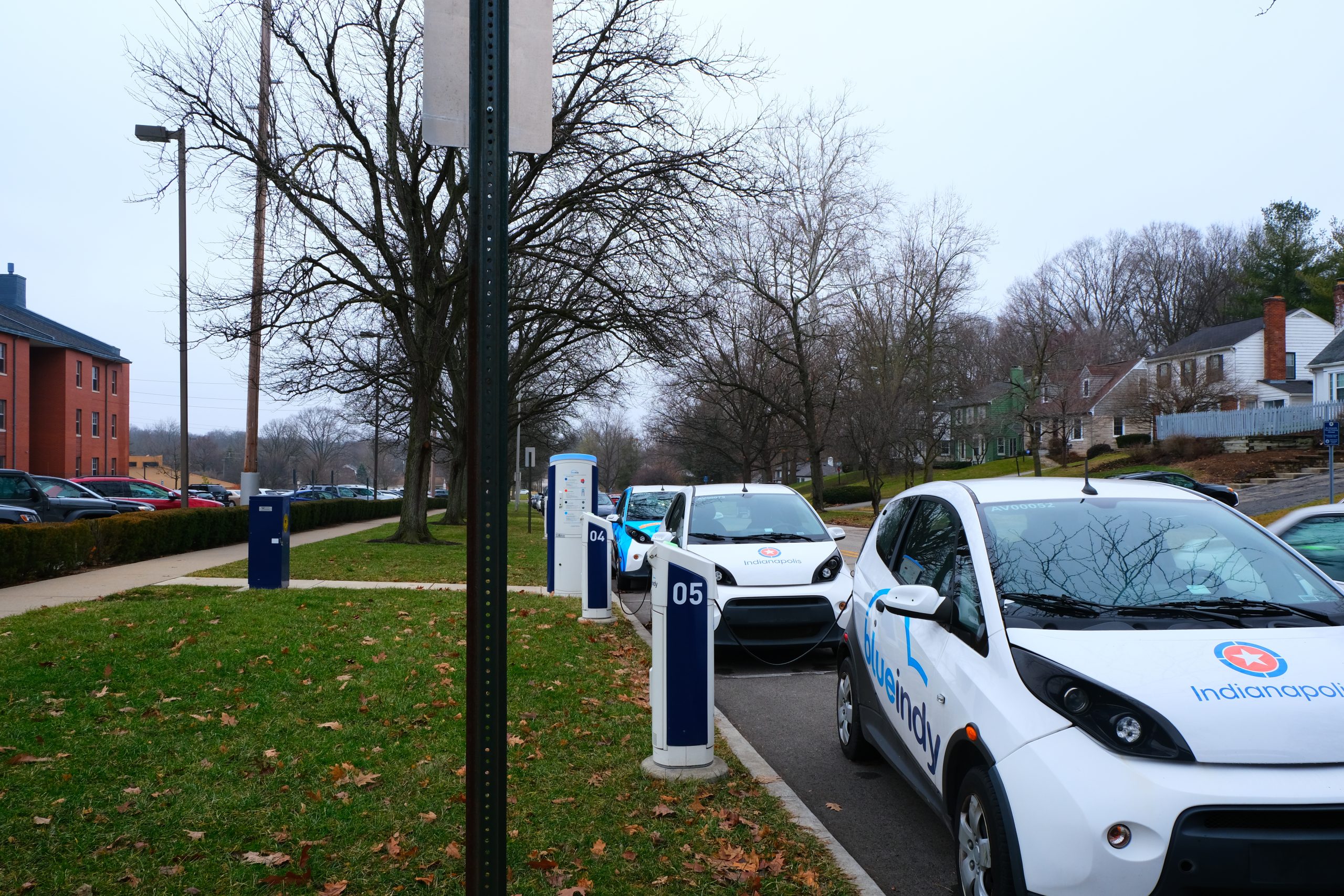 BlueIndy will be leaving Indianapolis and Butler University. Photo by Francie Wilson.

On Dec. 20, BlueIndy announced they will be leaving the Indianapolis area. This will go into effect on May 21.

BlueIndy has four different stations on Butler’s campus, and many students are members of their rideshare program.

Sydney Kastelitz, a sophomore strategic communication major, explains how BlueIndy has benefitted her in the past.

“I like it, personally, because I don’t have a car on campus so it’s a really easy way to get off campus and get places I need to be or just, like, go get food,” Kastelitz said. “I like how inexpensive it is and how it is environmentally conscious.

BlueIndy offers student memberships for $30 a year, and after the membership fee it costs about $3 for a 20 minute ride.

With BlueIndy leaving campus near the end of second semester, students without cars on campus are wondering what options will be made available to them.

This school year, SGA has been working to provide new transportation options to students on campus.

In August 2019, SGA introduced a partnership with Uber that allows students to get free Uber rides from campus to three locations where support services are offered. This partnership also allows students to Uber within a .25 mile radius from the Broad Ripple Kroger from 5 to 10 p.m. on Friday and Saturday nights for $5 off.

SGA president Malin Peterson said the Uber program has seen growth in recent months, and she expects it to grow even more in the upcoming semester.

“I think students can expect that over the course of the next semester there’s going to be a lot of programs and initiatives rolling out related to Uber,” Peterson, a youth and community development major, said.

Although many students are excited about the Uber program, Kastelitz explains what is special about BlueIndy.

“I’m really sad about it because [BlueIndy] is so nice,” Kastelitz said. “I know a lot of other students that really love BlueIndy and use it a lot to get basically any place they need to go. And I know it will affect a lot of students that do not have cars on campus because the cost of Ubering or other ride services is a lot higher.”

Although not all Butler students are BlueIndy users, many are sad to see it go.

Kerry Cron, a senior strategic communication major and tour guide for Butler’s admissions office, said her four years at Butler would not have been the same without BlueIndy.

“I just think it’s a really sad loss for both Butler and the city, and I know first hand that a lot of people fought to get it on campus,” Cron said. “And it is sad to see it leaving the city as a whole.”

Cron also said she felt BlueIndy was something families liked having on campus as a way for students to get around without bringing their car to school.