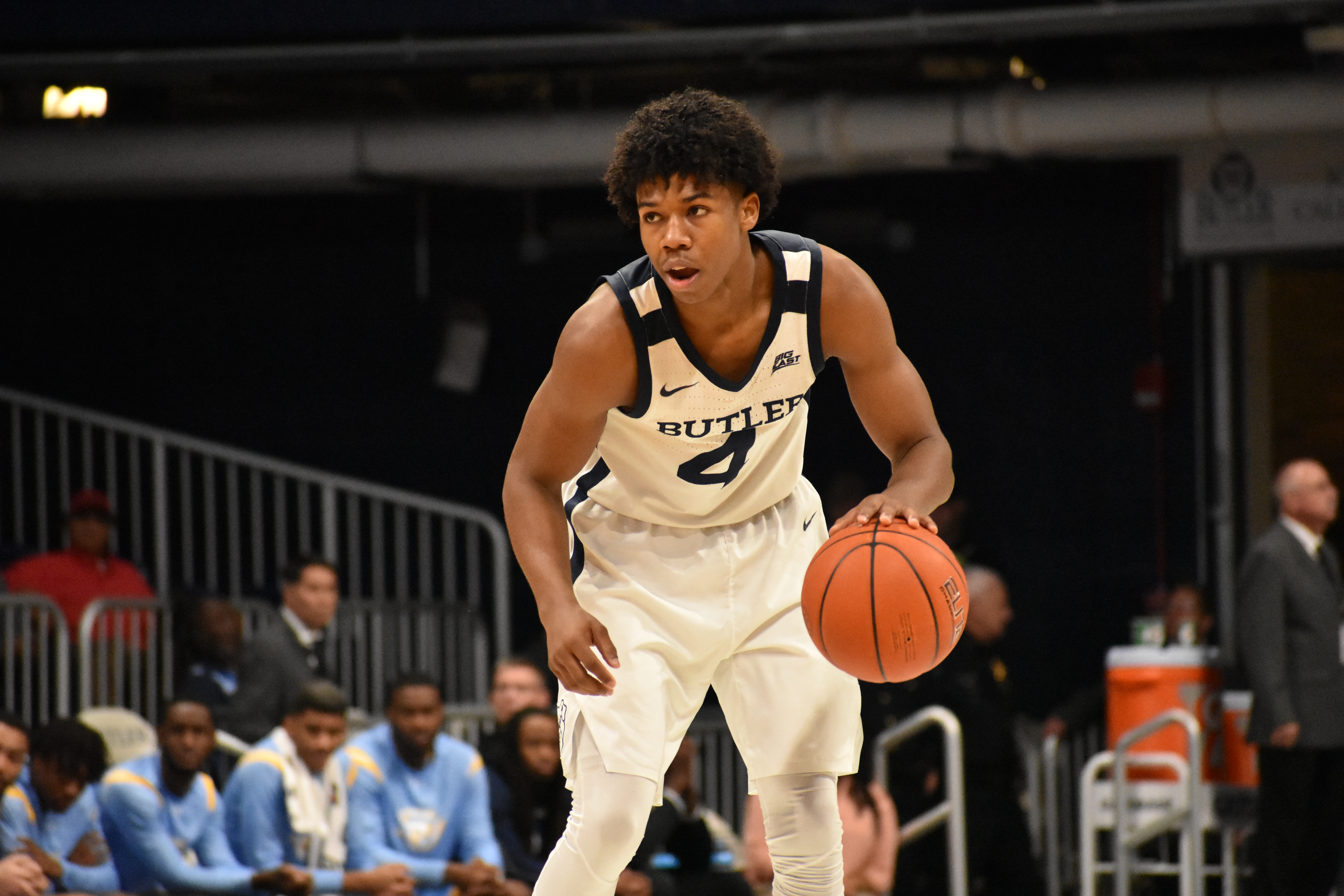 Khalif Battle surveys the defense against Southern on Dec. 14. Battle finished with 10 points and four rebounds. Photo by Donald Crocker.

Eleven different players scored for the Butler men’s basketball team in their 66-41 victory over the Southern Jaguars on Dec. 14. The Bulldogs move to 10-1 powered by a balanced offensive attack including three players in double figures. It was the first time all season that every scholarship player on Butler’s roster was active and Derrik Smits and Markeese Hastings saw their first action of the season. We go beyond the box score of an expected nonconference victory.

1. Khalif Battle continues to improve on both ends of the floor.

When Butler plays a team like Southern — the Jaguars were 340th at KenPom coming into the game — head coach LaVall Jordan has the luxury of mixing and matching lineups and giving more minutes to developing bench players. Khalif Battle, who had played less than five minutes in three of the last five games, got some real minutes against the Jaguars. In 17 minutes, the four-star freshman had 10 points on 2-of-4 shooting, got to the free-throw line six times and pulled down four rebounds.

Every time the freshman steps on the floor and gets meaningful minutes, he seems to have acclimated himself more to the speed of the college game. He knocked down two threes in this game — one of them a 4-point play — and, for a brief moment in the second half, took over the game on the offensive end. Battle scored seven of the first nine points for Butler to begin the second half while getting to the free-throw line five times in that span. Southern didn’t have a guy who could stay in front of him, and he took advantage on multiple occasions. On the defensive end, the freshman who was known for his offensive game out of high school continues to get better on the other end of the floor. Standing at 6 feet, 5 inches, he has the physical ability to be a lockdown defender and in this game showed both on the ball and in help defense that he is starting to grasp what Butler is trying to do as a defense. Battle continues to get better and should be a key rotation piece in Big East play.

2. On the heels of a not-so-great offensive performance at Baylor, Butler’s offense was balanced in every sense of the word.

The numbers on the page aren’t going to blow you away. The Bulldogs scored 66 points on 45.5% shooting while knocking down eight of their 22 3-point attempts. However, on a night that Kamar Baldwin struggled, scoring just two points on eight shots, Butler had 11 players score, three players in double figures and six players with six or more points. While no Butler player had more than 12 points, Butler’s players fit nicely into their individual roles on the offensive end, resulting in a balanced attack.

Sean McDermott knocked down three of the five 3-point shots he took, scoring 11. Bryce Golden and Bryce Nze combined for 18 points on just eight shots, missing just two of them combined, and Jordan Tucker knocked 40% of his threes and did a solid job knocking down the open shots he got. I’ve already mentioned Battle, but the role players on this Butler team were very efficient in this one and made up for the lack of production in the scoring column from Baldwin. After a season-low one bench point from Butler against Baylor, the Bulldogs got 27 points off the bench, a season-high.

3. “Each and every moment that these guys have had an opportunity to respond, they have.”

In many ways, it’s hard to put too much stock into what Butler did against a 3-8 team from the SWAC. With that being said, this was an important game for Butler in the sense that is was the first time on the floor since the first loss of the season in Waco. LaVall Jordan was not only impressed by the way his team responded after the first half at Baylor, but also how they responded with coming out ready against Southern.

“They have to do it. We can challenge them all we want, but we are in suits and ties and they’re in the jerseys and they have to do it,” Jordan said. “We held them to zero for a while, then they scored and we challenged the next group to do it. They ran off like 10 straight and got to 13. We talked about it, they responded and they go into halftime with 16.”

Butler jumped out to a 16-3 lead and gave up the least points they have in a half this season. This Butler team was ready to respond after its first blemish in the win/loss column this season. Jordan left all of that recognition for his players. Once again, this Butler team has shown an ability to respond and be tough that wasn’t there last season.

As I mentioned, today was the first game this season that every Butler scholarship player saw the floor. Ultimately, it is a good thing that this team is as healthy as it has been all season. But with more available players comes more available lineups and a more complex rotation. There’s no reason to suggest that Jordan and his staff won’t be able to figure it out, but over the next couple of weeks pay attention to if, or how, Butler’s rotation changes with Derrik Smits and Markeese Hastings active.