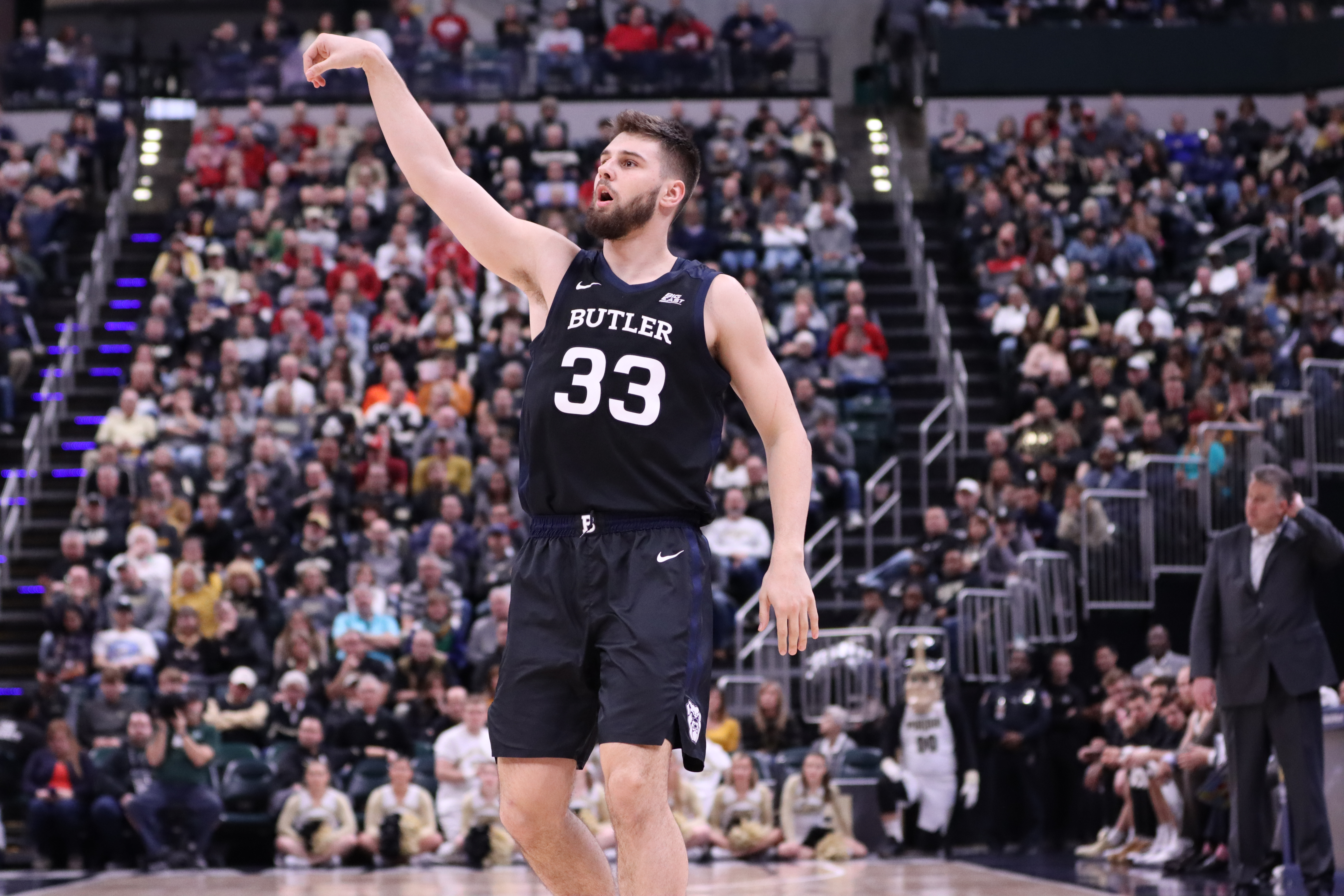 Bryce Golden watches a shot against Purdue on Dec. 21. Golden finished with 14 points to lead all scorers. Photo by Chandler Hart.

For the first time since 2016, the Butler men’s basketball team is leaving the Crossroads Classic and Bankers Life Fieldhouse with a win. The Bulldogs defeated Purdue 70-61 on Dec. 21 behind four Butler players in double figures and another stellar defensive performance. Let’s go beyond the box score of another game that highlights Butler’s consistency and balance this season.

1. Butler was resilient down the stretch again, and in general.

The Bulldogs controlled the majority of this game. They also controlled the majority of the game the last time they were in Bankers Life Fieldhouse and ended up losing to Indiana on a last-second shot. Butler got a really good shot from Purdue late in the game. After Butler spent most of the second half up double digits, Purdue got the game within five points with under two minutes left. They were fouling Aaron Thompson, forcing him to knock down clutch free throws — which he did — and Thompson also pulled down multiple huge rebounds late in the game. Butler was once again tough down the stretch even though the Boilermakers were pressing and they got some shots to drop later in the game.

The last four minutes of this game were a microcosm for how Butler showed its toughness throughout the day. Purdue came out quick. At the under 16 timeout, the Boilermakers were up 8-2, were out-rebounding Butler 7-2, and Trevion Williams had five points and three rebounds. Ultimately, Butler won this game by nine, Williams finished 5-of-14 from the field and the Bulldogs won the rebounding battle by six. They went on a 14-2 run in the middle of the first half and didn’t trail again after taking a 19-17 lead in the first 20 minutes. The last time Butler was in this building they weren’t resilient and they weren’t tough, today they were coming away with a win despite not having a field goal in the last 5:59.

2. Butler’s defense was good again, especially on the interior. And balance.

With four minutes left in the game, Purdue had scored just 48 points. They went on a run late and ended up with 61 points but nonetheless Butler’s defense was very good again, especially on the interior. After Williams owned the first four minutes, a collection of Butler defenders made it very difficult for him to score the rest of the game. Jordan Tucker, Bryce Golden and Derrik Smits all did a phenomenal job in the first half against Williams on the interior, and that was a big reason why Butler was able to establish a lead late in the first frame.

With Haarms, who averages 10 points per game, out, Purdue was going to need offensive production from other players. Butler held Purdue’s other three leading scorers to just 10-of-34 shooting from the field and held their leading scorer, Jahaad Proctor, to 2-of-13 shooting and just nine points. Purdue went without a field goal from 7:23 left in the first half to 17:08 remaining in the second half. While Purdue did knock down nine of their 20 3-pointers, Butler’s defense played at a high level for the majority of the game.

The Bulldogs are now seventh at KenPom. They’re ranked 17th in both offensive and defensive efficiency in the country. Balance has been key for this Butler team all season and they got it again tonight. A collection of solid offense — with four players in double figures — along with strong defense and some clutch free throws kept Purdue at arms length. This year a lack of consistency has killed the best teams in the country. If nothing else, Butler has been balanced and consistent since day one.

3. A spotlight on Bryce Golden.

It’s hard to overstate just how good Golden has been this season, not to mention how versatile he is for this Butler team. The sophomore got this opportunity because of an injured Smits to start the season and he has been phenomenal. He led the Bulldogs in scoring with 14 against Purdue, scoring from all levels of the court and playing defense in a similar manner. He’s now averaging 8.6 points, 3.8 rebounds and 1.6 assists.

The most impressive part of Golden’s game, specifically against Purdue, is his ability to impact the game all over the floor. On the offensive end, Golden is capable of scoring with his back to the basket, but he can also knock down elbow jumpers and the deep ball. In addition to his passing ability, Golden’s ability to score at all levels makes this Butler offense much harder to guard.

On the defensive end, Golden not only shut down Trevion Williams for large portions of the game, but he also effectively guarded Nojel Eastern on the perimeter. Granted, Eastern’s game is fairly one dimensional on the offensive end and he isn’t an outside threat, but he certainly is a quicker player and poses a different challenge for Golden than Williams does. The sophomore has been great on both ends this season and he was again against Purdue.

A couple of things, I can’t decide whether or not I should be worried that Butler was 11-of-22 at one point from the charity stripe, or happy they finished 21-of-32, knocking down their last 10. Either way, Butler has to be more consistent from the line. They are currently outside of the top 110 in the country in that category.

Finally, it’s been a really great week for the Big East. Butler took down Purdue, Seton Hall defeated Maryland, Providence destroyed Texas, and Villanova took down the No. 1 team in the country, Kansas. It’s not clear if the Big East has a great team — there might not be any in college basketball — but they definitely have a lot of good ones.