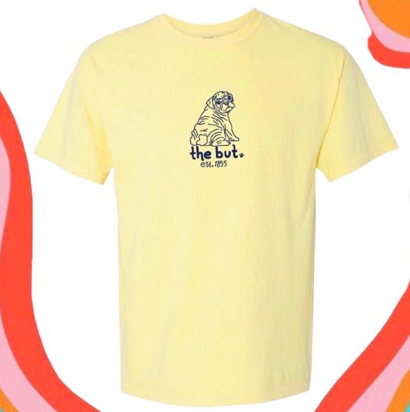 Butler University students are likely used to seeing the same bulldog plastered across Butler merchandise, but lately, more students have been sporting a depiction of the university’s nickname: the But. These T-shirts have been created by The But T-Shirt Co., a Real Business Experience group.

The But T-Shirt Co. is a student-run business created by Mikayla Boyle, a sophomore marketing and MIS major, for her RBE class. The company sells Comfort Colors T-shirts featuring a hand-drawn, wrinkly bulldog butt in blue, red, white and yellow.

In addition to Boyle, the RBE group is composed of five other sophomore business students: Laura Burnham, Kaitlin Walper, Caroline Croner, Torie Maddock and Emma Ryan. However, the logo itself originated outside the group. Olivia Heinecke, a sophomore art and design major, drew the bulldog after Boyle reached out to her.

After Boyle had the bulldog drawn, she presented the idea to her RBE class.

“We thought it was really cute and would sell well,” Ryan, the chief marketing officer, said.

But before they could turn a profit, they had to go negative. Every RBE group has to take out a loan from Butler, and while the loans typically range from $500 to $1,000, The But T-Shirt Co. had to take out a loan of $2,000 to pay for production costs.

It was a risk that paid off: The But T-Shirt Co. has sold over 600 T-shirts so far and is in the process of ordering another shipment after selling out of the first. Currently, the company has made over $5,000 in profits.

“We broke even the first day we were selling, which is crazy,” Burnham, the chief financial officer, said.

The But T-Shirt Co.’s success came as a surprise — they didn’t expect so many people to purchase the shirts. Now, the company attributes its success to three things: an early start, brand recognition and a low cost.

Ryan said her RBE mentor, John Seal, encouraged the group to get an early start on their company, as he told them that companies who begin early are typically more successful. So, the company created its Instagram account in mid September to raise awareness. Then, The But T-Shirt Co. released its pre-order form a couple of weeks later.

“We put the preorder form out at the end of September, which was to gauge sizing, and it ended up blowing up,” Ryan said. “We got way more than expected.”

Once the shirts came in, The But T-Shirt Co. was able to distribute its product to both students who pre-ordered and those who did not, as they had extra stock available.

“The fact that we could keep costs low helped us sell more shirts,” Burnham said. “And, since everyone got them, our name got out there. When customers come up to us and ask how much it is, they’re always shocked that it’s $15.”

“It wasn’t that expensive and I could use it every day,” Rhomberg said. “The bookstore shirts are so expensive, and it’s a good alternative.”

Since the first shipment of T-shirts has been distributed, the students wearing them around campus double as walking advertisements for the company.

“Brand recognition is super high,” Ryan said. “Everyone recognizes them. People see me and they’re like, ‘Oh, you’re The But T-Shirt girl.’”

While the company is just starting to grow its sales, the semester is coming to a close, and so is the RBE class. What will become of the company that was so recently built?

“Normally, you close out your business after RBE,” Boyle said. “But, we might keep ours going because it’s doing so well.”

This semester, The But T-Shirt Co. has added two new colors and a second pre-order, but they’re looking at bigger plans for the spring.

“We’re looking at branching out into other merchandise and switching from a singular product to a brand,” Ryan said.

In addition to expanding its product range, The But T-Shirt Co. hopes to expand its customer base, as well. The company has noticed that when people buy their product, they’re usually not just buying one shirt. Instead, people are buying four or five shirts — enough for their families.

“We are trying to contact businesses outside the Butler bubble to reach a bigger audience,” Burnham said. “Our goal is to make it into The Shop, but it turns out most RBE teams [already] contacted them and it’s hard to get in, so we want to reach out to Carmel and Zionsville communities, as well.”

Until then, students can order a T-shirt from The But T-Shirt Co. on their website, which can be found in the profile of the company’s Instagram page, @the_but_tshirt_co.