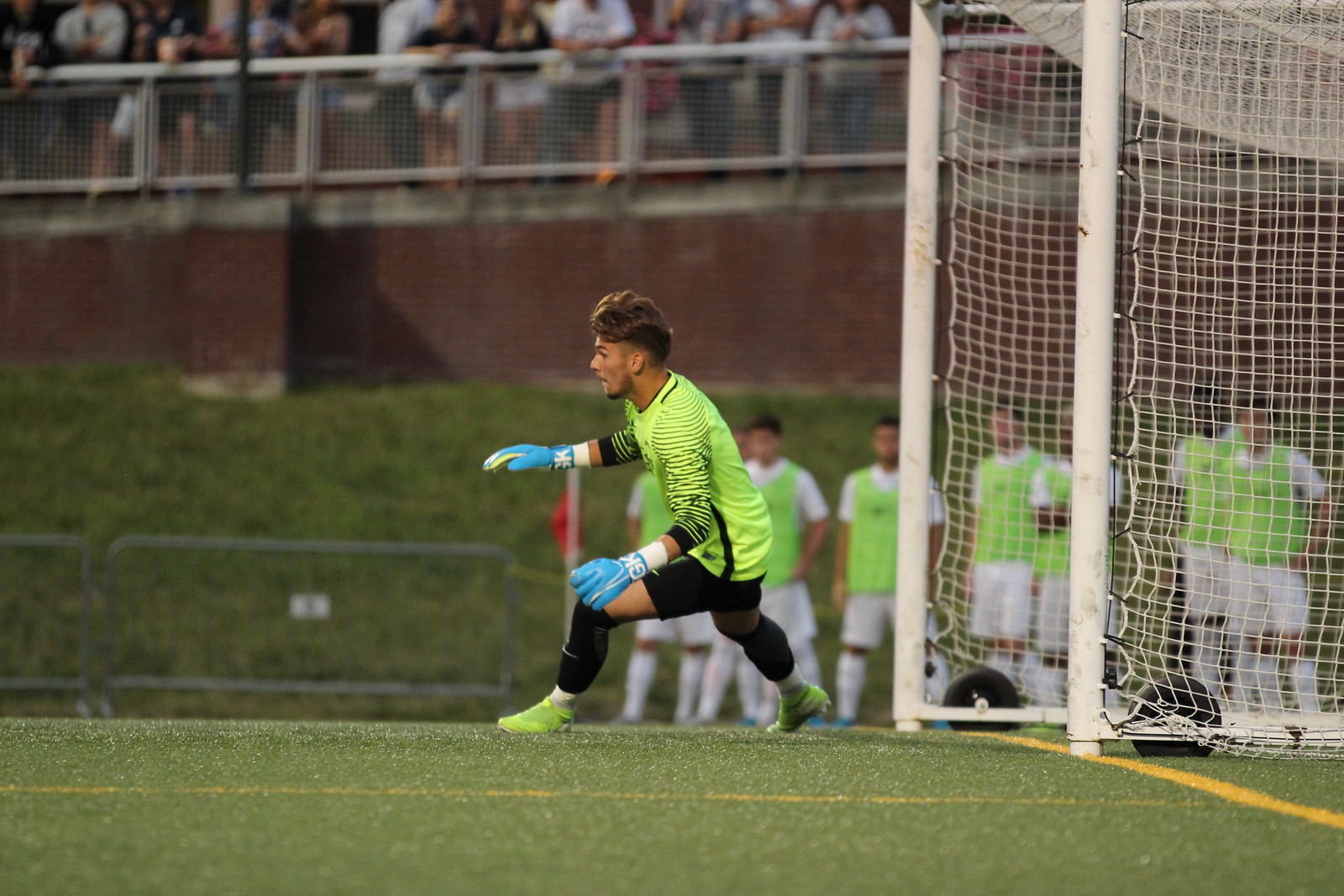 Gabriel Gjergji dives for a save during a game this season. Chandler Hart / Collegian file photo.

In the 18th minute of the Butler men’s soccer team’s Sept. 24 game against Indiana, during a penalty kick, Gabriel Gjergji dove right and made the biggest save of his career. He pumped his fist and high-fived a teammate, but he wasn’t applauding himself.

In hindsight, his teammates and coaches say it shifted momentum to Butler, the turning point in a 2-1 victory. Gjergji, however, was simply relieved. All he could think about was how his slide tackle caused the penalty.

With a 2-1 victory over Xavier on Oct. 6, Butler finished the regular season with a 10-6-1 record, significantly better than last year’s 4-12-2 mark. Leading their drastic improvement is Gjergji, who was named Big East Goalkeeper of the Week in October and has 74 saves, 21 more than last season. Everything starts with what head coach Paul Snape called a “healthy swagger.”

“If you achieve stuff, you start becoming confident,” Snape said. “And once you have confidence, you start believing.”

It was a little harder to believe last season.

For the first two weeks, all the lines in the Sellick Bowl — football, lacrosse, soccer — confused Gjergji. In Vicenza, Italy — where he grew up — it’s all soccer lines. The crisscrossing lines threw off his orientation, made him think for a second or two.

He’s made several adjustments since then. Over the summer, he trained with the Indy Eleven, a professional soccer team who play in the United Soccer League. For one month, he participated mainly in goalkeeping drills and scrimmages. It forced him to adjust to the professional pace.

“Getting the opportunity to play with professionals – the demands that are put on him, just to make sure he shows up every single minute, I think that was a benefit to him,” Andy Swift, Indy Eleven’s goalkeeping coach, said.

Snape received constructive feedback from the Indy Eleven. While he was not ready for the sheer speed of the professionals right away, he ultimately adapted.

“At the end, it’s all about the same job, which is keeping the ball out of the net,” Gjergji said. “That’s it.”

Dick’s rookie season as a professional – 21 games with the Swope Park Rangers of the USL – and Gjergji’s first season at Butler – 16 starts in 18 games – had both ended. A year after Dick conceded the least goals-against average of any Big East goalkeeper, Gjergji conceded the most.

There, seated across from each other at a blue high-top table, the two goalkeepers spoke for an hour. Predictably, they touched on soccer-related topics — how to properly defend crosses, stop shots, weight-lift, etc.

What Dick remembers most, however, was Gjergji’s responses: “How do I train in the fall? Who do I turn to for training? How do I defend crosses?” To Dick, Gjergji’s sponge-like mentality represented a burning desire to spark the Bulldogs’ collective fire.

“Whenever you have that mentality, it shows passion about the sport, and the passion about the team-first mentality,” Dick said. “Because he knows the team needs to rely on him back there. I think he’s embraced the mentality that it’s not about stats, it’s not about shutouts. As a goalie, you need to be there when your team needs you, but at the end of the day, the biggest thing is getting that win.”

Butler junior midfielder Joel Harvey said last season Gjergji was more timid, so spending more time with his teammates off-the-field this season has helped him develop a better rapport, too.

“Growing that bond off the field has given him a bigger platform to be able to lead from our back line,” Harvey said. “He knows the guys a lot better, so it’s a lot easier for him to talk to us, especially on the field.”

Gjergji chose Butler in the first place for one simple reason: Eric Dick’s saves increased every season. There must be a great goalkeeper coach that would make me improve, he thought to himself. Enter Knopfler, Butler’s goalkeeping coach.

Knopfler has felt a “special connection” with Gjergji since they met over breakfast before last season. It sparked because they’re both foreign — Knopfler hails from Germany and was Butler’s starting goalkeeper from 2007 to 2010 — but their relationship now extends beyond a mere connection.

Last season, after the Creighton game on Sept. 15 which Butler lost 3-0 — with two of those goals scored in the first three minutes of the second half. — Gjergji sat on a locker room bench, alone. All kinds of thoughts — vulnerable, sad, and angry — rushed through his head. He wondered where the team once ranked top ten in the nation went, and whether it was his fault or not.

Knopfler saw him, and they ended up speaking for 40 minutes.

“I put it in perspective. The leadership that he has to give to the defensive line is important,” Knopfler recalled saying. “[You] cannot lose [your] self-belief because that will trickle down to the defense. [When]  a goalkeeper or the defender makes a mistake, you have to be a rock back there.”

Since Knopfler, the founder of Lions Wealth Management Group, has a full-time job, he is limited to two-afternoon practice per week. Instead, Knopfler and Butler’s three goalkeepers meet two-to-three mornings per week. At 7 am, the routine starts: stretch, huddle, half-a-lap, ball-handling, then scouting reports.

“He’s very critical,” Gjergi said. “That’s what I like about him. He’s never gonna be like, ‘Gabi, you did a great game.’ He’s always gonna find the little thing that I did wrong to make me improve.”

“You know, it’s funny,” Knopfler said. “Sometimes, he sends me clips and he takes right off his laptops, and you could see that the language is Italian on it, and I know exactly that he’s been watching it on his own.”

In November 2017, Snape flew down to Montverde Academy to watch Butler’s next starting goalkeeper. Quickly, he became intrigued by Gjergji’s physical and technical traits — he flew back down in January. After Gjergji’s freshman season, however, he saw room for improvement.

“I think after last year, he was surprised at the quality and intensity of Division 1,” Snape said. “And at the end of the year, he understood, he was humble, and he just wanted to learn.”

The moment Snape noticed a new and improved Gjergji was in the first exhibition game, against Oakland on Aug. 18. There wasn’t an exact play that stood out to Snape, but rather, how Gjergji looked. He was sharper, fitter, just more confident.

If Butler is to defeat Creighton in the first round of the Big East tournament on Nov. 9, they’ll need Gabriel Gjergji to have it — that “healthy swagger.”

“[Last season] we expected a lot better,” Gjergji said. “We had a No. 9 ranked class and two internationals. This year, that’s not happening again. I’m telling you that.”