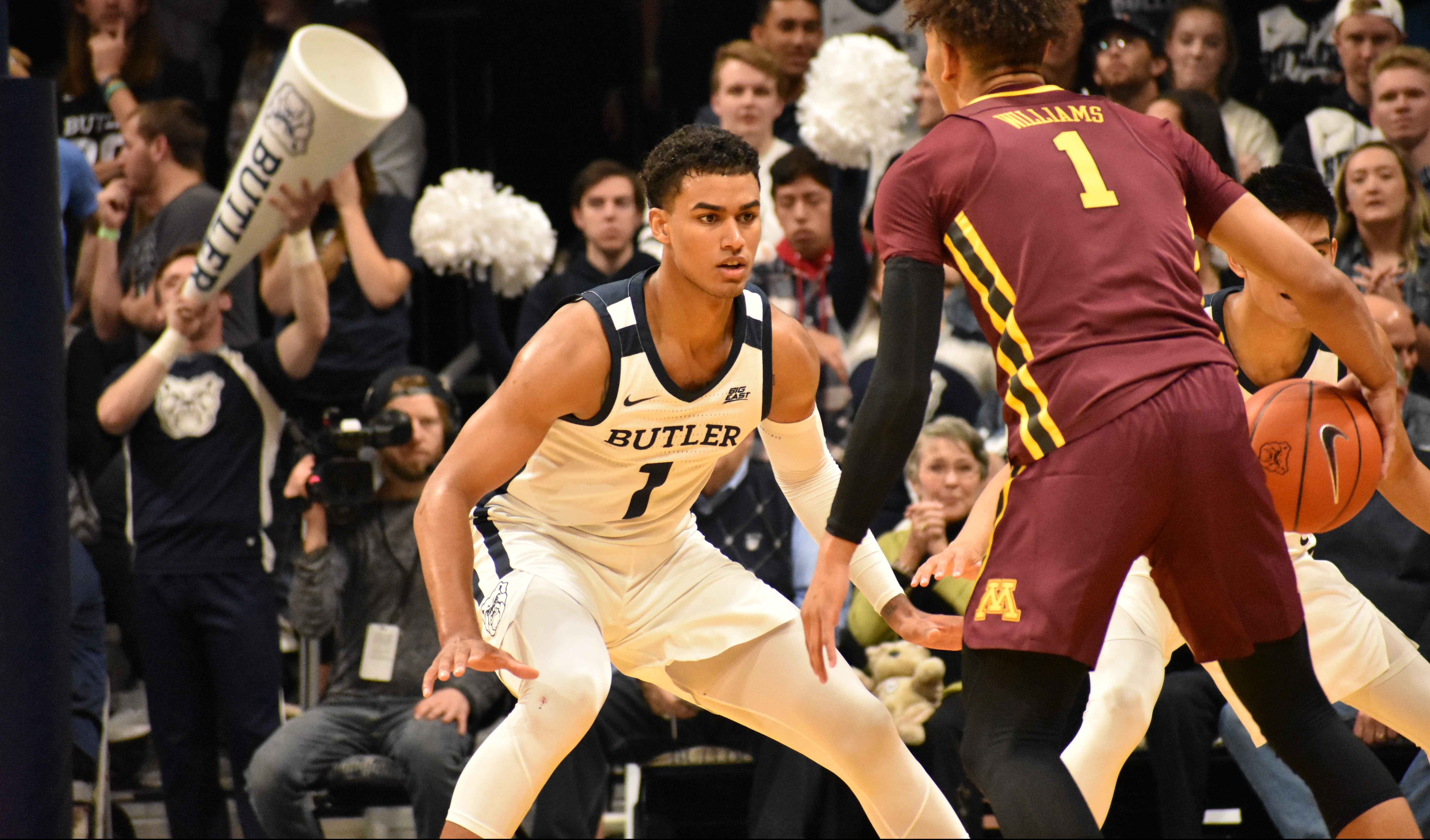 On a night where the team made just three of their 14 3-point attempts, the Butler men’s basketball team defeated Minnesota 64-56 as part of the Gavitt Tipoff Games. Without a doubt, this is a game Butler would not have won last year, but they did on Nov. 12. Here’s what we learned from a telling victory over the Gophers.

1. Offensive rebounds and Daniel Oturu kept the Gophers in the game.

Butler’s defense was phenomenal in this game, and we’ll get to that, but one player and one stat, in particular, kept Minnesota in this game when they were outplayed otherwise. Minnesota big man Daniel Oturu finished with 24 points on 9-of-13 shooting and added 10 rebounds to his effort. Butler played great defense in the first half, but offensive rebounds allowed the Gophers to hang around. In the first half alone, Minnesota had 10 second-chance points on five offensive boards. Ultimately, Butler ended the game with just one less offensive rebound, but those second chance efforts kept the Gophers in it until the final minutes.

In the post game press conference, head coach LaVall Jordan talked about finishing possessions both on the glass and late in the shot clock. While the Butler defense was praised by the media throughout this game, Jordan said he didn’t think the total defense was that great. In the first half, that was absolutely true. Butler was clearly the better team in a game where both teams struggled to score. It didn’t come back to bite them in this game, but allowing second chance points is the kind of category that can swing a game in Butler’s favor but also cost them a victory. Butler needs to get 40 minutes of rebounding, not just the 20 they got in this one.

2. Butler’s defense was locked in early, and it stayed that way.

From the first tip, Butler was locked in defensively and specifically at the beginning of both halves. Butler forced six turnovers combined in the first two minutes of both frames. They set the tone early and did not let up. Where Butler was particularly impressive was turning defense into offense. Minnesota turned the ball over 18 times to Butler’s nine. But the real difference maker was Butler’s ability to get 25 points off of those 18 turnovers. The Gophers managed just two points in such situations. Aaron Thompson made Marcus Carr’s life miserable in Thompson’s first game of the season against a Power 5 guard and Butler did an excellent job guarding the 3-point line — Minnesota shot just 26 percent from beyond the arc.

This is officially a trend, and not something that can be connected to playing lesser, mid-major opponents. Only five Gophers scored in this game and only two players had more than 10 points. Butler completely shut down everything Minnesota tried to do except for Oturu, and even he had to work for everything he got. Last season, Butler needed something to hang its hat on. Tonight, when very few shots were going in, the Bulldogs were able to hang their hat on the defensive end. That wasn’t true last year.

3. Butler did something they didn’t do last year, win while shooting poorly.

To a similar tune, we learned something very important about this Butler basketball team: they can win without shooting the ball well. Against the Gophers, Butler was 3-of-14, or 21%, from beyond the arc. Last season, Butler shot 30% or worse from that territory in 10 games. In those contests, they were 1-9 with their only win coming against Detroit Mercy. Quite simply, last year Butler couldn’t win if they didn’t shoot it well. With a gritty win like this against Minnesota, it is clear that Butler has that ability this year.

Things don’t have to look pretty for Butler to get the job done — at least it doesn’t seem that way. In the Butler Collegian’s men’s basketball preview, Aaron Thompson talked about “getting back to Butler basketball.” That means grinding out wins, hanging your hat on the defensive end and winning because of that “Butler Way.” Through three games, Butler looks to actually be back to “Butler basketball.”

Two things in tonight’s final thought. First, Bryce Nze was impactful again, this time against a Big Ten opponent. Apart from a tough night from the free-throw line, Nze rebounded the ball well, exhibited some touch — including a left-handed jump hook — around the rim and made Oturu work for every bucket. Nze is for real. Secondly, Minnesota had a hole to fill when Jordan Murphy graduated from the program. They have filled that hole with Daniel Oturu. He is a high-motor guy that rebounds the ball exceptionally and has a nose for getting the ball in the basket. Only a sophomore, he is going to be special for Minnesota.