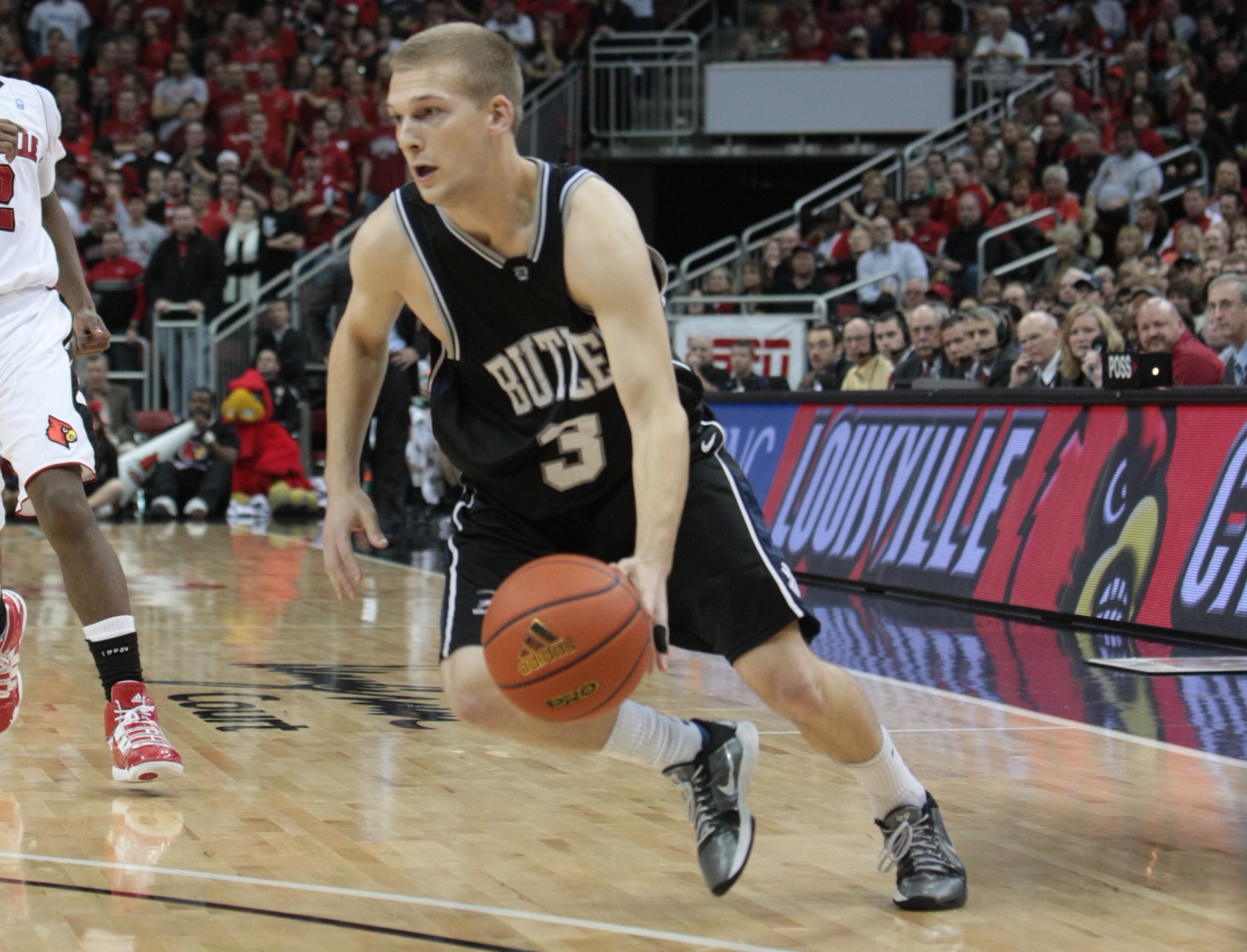 Zach Hahn dribbles the ball during a game against the Louisville Cardinals. Hahn led the Bulldogs in bench scoring in 2009-10. Collegian file photo.

Hahn graduated from New Castle High School in 2007, and brought a winning attitude as soon as he stepped foot on Butler’s campus. The 6’1 guard helped the Trojans take home the Indiana state championship in 3A his junior year. After graduation, Butler just seemed to be the best fit.

“To be honest, Butler was one of the last places I intended to go initially,” Hahn said. “With so many New Castle guys coming through, I was kind of against it, but when I sat down to look at my options, it was no comparison to the other schools that offered me. What turned out to be something I was against in the first place ended up being the best decision of my life.”

Hahn immediately made a difference for the Bulldogs, playing in all 33 games as a freshman and leading the Bulldogs in scoring off the bench in his sophomore and junior campaigns.

He also hit a 3-point shot in the 2010 National Championship Game versus Duke University and was on the court when Hayward’s half-court heave to win the game went off the mark.

Emerson Kampen, assistant coach for Butler men’s basketball and then-player of that Final Four team, said the individuals of that team have been successful in their basketball life after Butler because they were so competitive.

“It was fierce,” Kampen said. “[Zach] was a great leader for that team because he wasn’t afraid to voice his opinion.”

As for his student experience at Butler, Hahn felt fortunate to learn from professors at Butler.

“I got to learn from Dr. Mindy Welch and Dr. Lisa Farley, and they were great role models of what an educator should be,” Hahn said. “They really made my experience there so enjoyable.”

After graduating from Butler in 2011 with a degree in Physical and Health Education, Hahn didn’t take long to get his life started.

He got married to his wife Lindsey, who played soccer at Butler, and got a gig as an assistant on the Ben Davis High School boys’ basketball staff. Three years later, the head coaching position at Center Grove High School opened up, and Hahn got the job.

For those not from Indianapolis, Ben Davis and Center Grove are two of the eight schools that make up the Metropolitan Interscholastic Conference. High schools in Carmel, Lawrence Central, Lawrence North, North Central, Pike and Warren Central make up the rest of the conference.

There are several graduates from schools in the MIC that reached the NBA: Josh McRoberts from Carmel; Kyle Guy from Lawrence; Mike Conley and Greg Oden from Lawrence North; Eric Gordan from North Central; and Courtney Lee, RJ Hunter, and the Teague brothers from Pike.

It is arguably the toughest conference in the state, possibly the Midwest. Hahn landed the Center Grove job as a 25-year-old.

Hahn is referring to Trayce Jackson-Davis, a top-30 player in the 2019 class according to ESPN, and Indiana University’s top incoming freshman. If Jackson-Davis were to play in the NBA, he’d be the first in Center Grove’s history to do so.

The culture change that Center Grove has undergone is undeniable, but Hahn deflects much of the credit to the players themselves.

The work ethic and the competitiveness Hahn instills in his players can be directly linked to what coach Brad Stevens did for him and the rest of the players from the 2010 team. Gordon Hayward and Shelvin Mack have not experienced careers in the NBA by chance. Brad Stevens is not the coach of the Boston Celtics by chance. Ronald Nored is not an assistant of the Charlotte Hornets by chance.

While the group of young men who represented Butler University 10 years ago were very
successful on the basketball court, they have been even more so in what they chose to do after they graduated.

“[Hahn] would succeed at any level he’s at,” Kampen said. “If a college or even the NBA came calling, he’d be prepared.”

But as for now, being here for his wife and two children headline Hahn’s priority list.

“My parents were teachers in high school and I saw what it was able to provide for their family, and I wanted the same for my family,” Hahn said. “I saw how much they were able to be around their kids.”

Through all of his career successes, Hahn has been able to find a balance. He’s coaching a successful program that plays dozens of high-energy games against high-profile schools, but is still able to be in the Indy area around the young family he has begun.

Contributor
Tags Drew Sandifer, where are they now, Zach Hahn