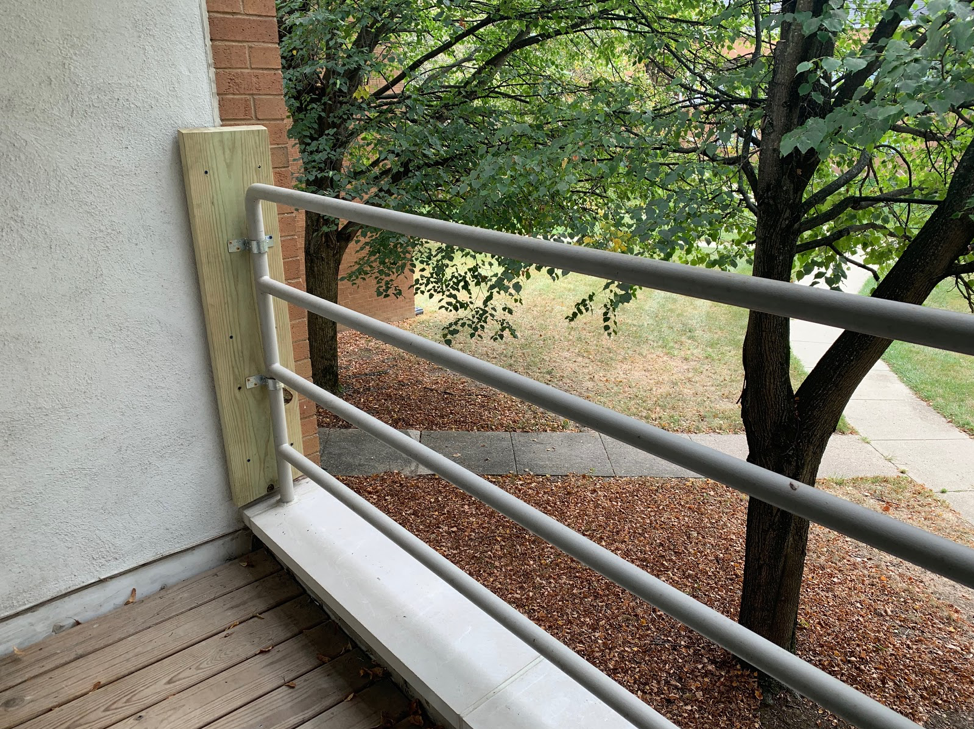 Balcony railings at South Campus apartments have been repaired. Photo by Drew Favakeh.

Nearly a month after 18 South Campus apartment balcony doors were bolted shut because one railing collapsed, they have been unlocked.

The repairs are in response to an incident on Aug. 20 when a balcony railing fell while three residents were sitting on it. They believed it was safe to do so because they saw a form left in their unit by Butler maintenance earlier that day. Doug Morris, associate vice president of facilities, said in a previous email to the Butler Collegian that the form did not confirm the railing’s safety.

Dick Davis, manager of South Campus and preventative maintenance, oversaw the repairs of the railings. In an email to The Butler Collegian, Davis said the 18 South Campus balcony railings were repaired from Sept. 17 to Sept. 27.

In efforts to make the railings more stable, Davis wrote in an email that the railings were  leveled, reinforced with pipe clamps and anchored to the walls.

Olivia Wagner, a South Campus apartment resident and junior marketing major, said she was bothered by the aesthetic of the plain wooden panel on the new railings.

Nick Hagen, a South Campus Apartment resident and junior health sciences major, said his balcony railing took the longest to repair because it had been the one to collapse on Aug. 20. Since Hagen’s balcony railing had eroded, maintenance laid fresh concrete down.

“This one was all cracked,” Hagen said, pointing to the middle bottom portion of the repaired railing. “There was a little stuff over there. If I just put this much effort [shakes balcony railing lightly] on the other one, it would probably swing. This one doesn’t. It’s good now.”

Wagner said she became aware that Butler maintenance was repairing her balcony because she saw people in bright green neon shirts in the parking lot sometime between Sep. 19 and Sep. 26. It was after class that she said she noticed her balcony was being repaired.

Kerry Cron, a South Campus apartment resident and senior strategic communication major, on the other hand, said she was not home when maintenance unbolted her balcony door. Instead, she said she saw a note, indicating her balcony was safe to use.

“Then we got a little note saying it was okay, and that we could go out there again,” Cron said. “So they did it individually, the maintenance people went room-to-room, gradually, it took a while.”