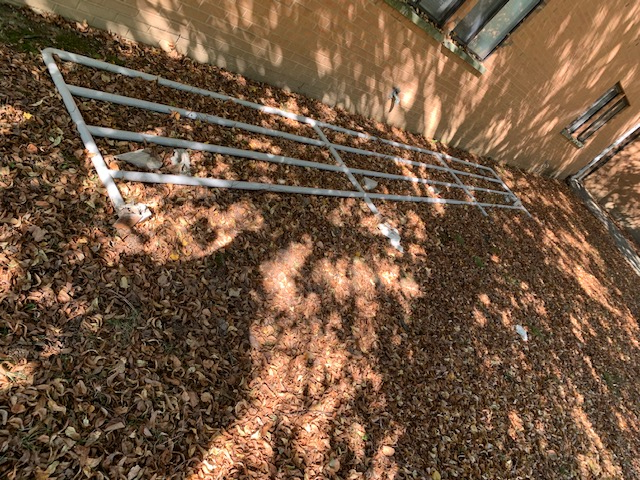 The C4 balcony railing lies on the ground after falling. Photo by Drew Favakeh.

The South Campus apartments have faced issues regarding loose and unstable railings on the unit balconies. On Aug. 20, one railing collapsed entirely, which resulted in Butler University’s department of maintenance services bolting shut all unit balcony doors on Aug. 28.

On Aug. 20, junior South Campus residents Alex Rydberg, Nick Hagen and John Lowe were cooking burgers out on their apartment C4 balcony and sitting on the railing when it fell through. The students jumped back onto the balcony as the railing fell.

“Not something you want to go through,” Hagen said. “I guess afterwards, it was like, ‘oh sh*t, something happened. We made it, somehow, we got up here.’ Afterwards, it’s ‘what the hell just happened’ type of stuff.”

Hagen’s mother, Vonda Hagen, had moved her son into his apartment on Aug. 19, the day before the railing fell. She noticed a crack in the cement on the balcony near the railing and submitted a service request to fix the railing.

On Aug. 20, a maintenance worker left a service request response form at the apartment. The residents found the form’s format to be confusing, and it led them to believe the balcony railing had been repaired.

“I saw a note on the door that said ‘completed,’” Rydberg said. “So we were thinking, ‘OK, this is fine, it’s what it is. So it’s safe enough to sit on, maybe.’ I was like, you know, ‘it’s fine, they wouldn’t have hung something on the door.’ Well, I guess we found out that that’s not the case and it ended up going over.”

Doug Morris, associate vice president of facilities, said he understands how one can interpret the slip to mean the work was completed. However, in their system, he found the work was, in fact, incomplete.

“For a person unfamiliar with these tickets, it could be misleading,” Morris wrote in an email to The Butler Collegian. “But in this situation, it would seem that the note indicating a return date and observation that the rail was still loose would indicate it was not complete.”

However, not all balconies in the apartment complex currently have brackets, making the railings extremely loose.

After further count by The Butler Collegian, three of the balcony railings were supported by brackets, while 17 were not.

Morris knew that those railing without brackets had “wobble,” but since none were identified through maintenance orders, he said he believed no further action needed to be taken.

“Really, [the railings] had some wobble, but nobody identified that they were extremely loose,” Morris said. “When CTS [South Campus] had done the inspection, from how I understand it, they went around and looked at [the railings] and just put the supports on one’s that had deteriorated at that point.”

When the C4 balcony railing collapsed, Morris said he was skeptical of the residents’ account about how it fell.

“I really believe in my mind, somebody wanted to make a point that they didn’t like this and pushed that thing over, abused it until it went over,” Morris said. “And did it before a repair could be made properly. Now, that’s the way I feel about it. And you know what, it pisses me off.”

After the C4 balcony railing collapsed, Morris walked around South Campus and noticed the lack of brackets on some balconies.

Morris decided, as a precautionary measure, to have maintenance bolt every South Campus apartment residents’ balcony doors shut on Aug. 28.

Residents were not notified that maintenance services were entering their apartments to bolt the doors shut, at least until the day after. On Aug. 29, Shannon Mulqueen, community director of Butler University apartments, sent a mass email to South Campus Apartments residents.

“Over the next month, all balconies and railings will be thoroughly inspected for safety purposes,” the email read. “Until this inspection is completed, all balconies will be closed.”

The residents from C4, where the railing fell, said they never received the email from Mulqueen.

“I didn’t notice [the bolted shut door] and that’s what pissed me off,” Nick said. “They didn’t care to tell us that they did this?”

Olivia Wagner, South Campus Apartment resident and junior marketing major, said three maintenance men knocked on her front door on Aug. 28 and told her they needed to lock the balcony shut, yet provided no reason as to why.

“I understand this is campus housing, so like they come in as they please, but it’s an apartment, so you gotta give me a little bit of a warning,” Wagner said. “Because no one had any idea what was going on.”

While Wagner was home, other CTS residents were not home at all, and were surprised to see their balcony doors bolted shut.

Sophomores Erin Siechen and Madison Pius, both of whom live in the B building, returned from class to find their balcony chairs next to each other in their living room. Siechen, Pius and their two other roommates frequently lock their front door before leaving, so they thought they had been victims of burglary.

“We were looking around to see if anything was confiscated,” Siechen said. “And there was nothing, so we’re like, ‘alright that’s interesting, that they just moved our chairs in and didn’t let us know about it.’”

University living spaces “may be entered whenever authorized personnel of the University have reason to believe that guests are present at times other than authorized. Spaces may also be entered by authorized University personnel to complete maintenance and repair work,” according to residence life policies on Butler’s website.

For those residents interviewed, the main allure of the South Campus Apartments was the balcony, as well as it being the cheapest apartment option on campus.

“We really wanted a balcony, but we also wanted our own room, so the balcony was more important to us over singles in AV,” Wagner said.

In a mass email sent to South Campus Apartments residents on Sept. 10, Mulqueen wrote that the university was working to secure a contractor for the loose railings. Morris said, however, that day was when the brackets to secure the railings were supposed to arrive.

Morris said once the brackets arrive, the repairs should be done within seven to 10 days, however they have not yet been completed as of Sept. 17.

On the same day as Mulqueen’s email, Morris decided to unbolt the three doors that do have brackets, but kept the other balcony doors locked.

“Out of safety, it was the right thing to do because they didn’t want something else to happen,” Morris said.

Morris said there have been no inspections of the railings since Butler purchased the South Campus Apartments in June 2017. Maintenance only responds to service work orders in cases like this.

Some residents, like sophomore pharmacy major Erin Siechen, are not confident anything will happen.