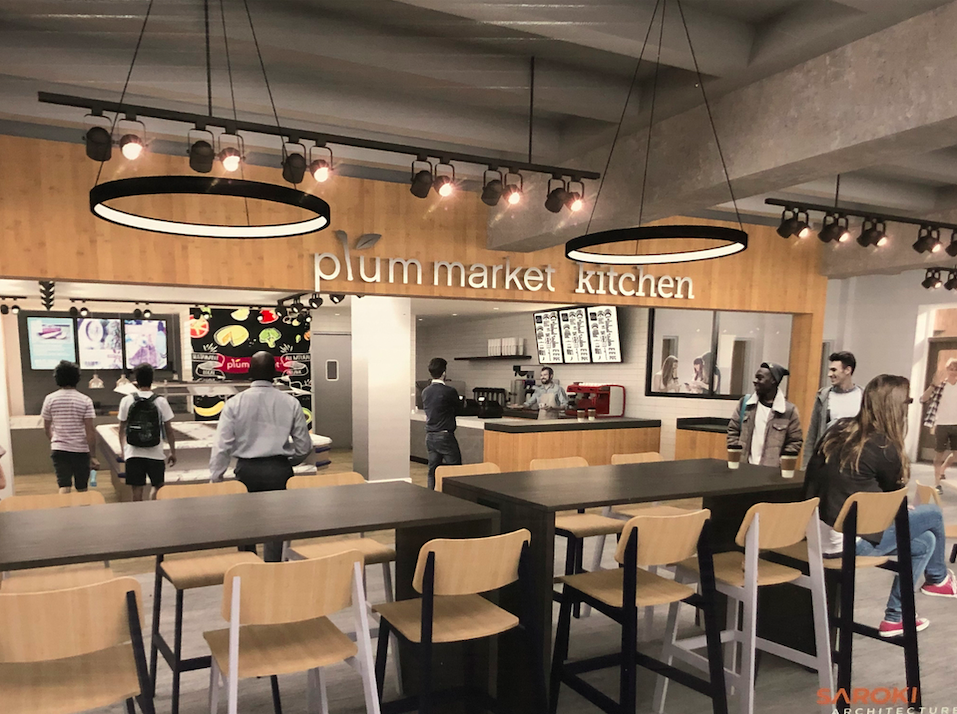 Plum Market is scheduled to open at the end of November. Photo courtesy of Butler University.

C-Club, renamed Plum Market, has been undergoing a complete renovation throughout the fall semester, and is one of the latest additions to Butler University’s campus that came along with the transition to food supplier Bon Appetit.

Mandy Rentschler, marketing manager for Bon Appetit at Butler, said Plum Market is scheduled to open by the end of November. Once open, Plum Market will bring additional food options to campus.

Hank Dalle-Molle, first-year student and finance major, said he will be happy to have more options on campus.

“I’m excited because there’s not a lot of places to use flex dollars on campus,” Dalle-Molle said. “I never even drank coffee before coming to school, but now I go to Starbucks every day just so I feel like I’m using my flex dollars. Now [Plum Market] will be a place to spend them and save me real money versus going to the grocery store.”

This renovation could benefit upperclassmen as well. Junior marketing major Trent Thompson said he plans on trying out Plum Market.

“I’ll definitely go, and if I have a positive experience I’ll probably go more often,” Thompson said. “I’m excited about the renovations. I think it’ll be more of a nice environment for people to hang out in.”

Renovations include the replacement of the floors and subfloors to remove mold, plumbing improvements and renovated bathrooms. Additionally, Plum Market will feature all new furniture and a student lounge with a printing center.

While students still have a few more weeks of waiting before the official opening of Plum Market, the newest addition on campus, Chatham Tap, is up and running.

Bruce Arick, Butler vice president for finance and administration, ate at Chatham Tap with his wife on opening night.

“I think the quality of the food is better,” Arick said. “I would say it was close in price to Scotty’s, it may be a little bit more but in the same ballpark range.”

In addition to accepting Dawg Bucks, Chatham Tap will also accept up to 10% of students’ flex dollars balance, Arick said, but the feature has not been implemented yet.

Several students have had mixed reactions to their first experiences eating at Chatham Tap. While some have been enjoying the food, others have experienced long wait times.

Sophomore finance major Ethan Schipp had a reservation at Chatham Tap to eat with the SGA executive committee and the homecoming committee before Yell Like Hell.

“Our waiter wasn’t the best,” Schipp said. “But I think she was stressed out. Our food was paid for because of the bad customer service.”

Once seated, he waited over an hour for his food before having to leave to make it to Yell Like Hell on time. He and others who left early had their food packed in to-go boxes and brought to Hinkle Fieldhouse.

“Their whole menu is perfect for a college campus and it’s reasonably priced,” Schipp said.

Thompson also ate at Chatham Tap but did not have a reservation.

“The service was pretty slow,” Thompson said. “But the food was pretty good. I was a little surprised to find out that french fries and ranch both cost extra.”

Chatham Tap was open for homecoming on Oct. 26, one of the busiest days of the school year.

Coleman Johnson, a sophomore international business major, ate there during homecoming on Oct. 26.

“It wasn’t a memorable experience,” Johnson said. “The fried pickles were solid. The burgers were subpar, they were really pink. I rated it 3.7 out of 10.”

Even though Johnson said he wasn’t impressed by the food, he appreciated the customer service and said Chatham Tap is a restaurant with a lot of potential not yet harnessed.

“The waiter was super nice,” Johnson said. “He wanted to let us know that it was their opening weekend and they weren’t really prepared for the volume of people. They ended up paying for our food.”

Students interested in eating at Chatham Tap can find it in the parking garage on Sunset Avenue where Scotty’s Dawghouse was located.