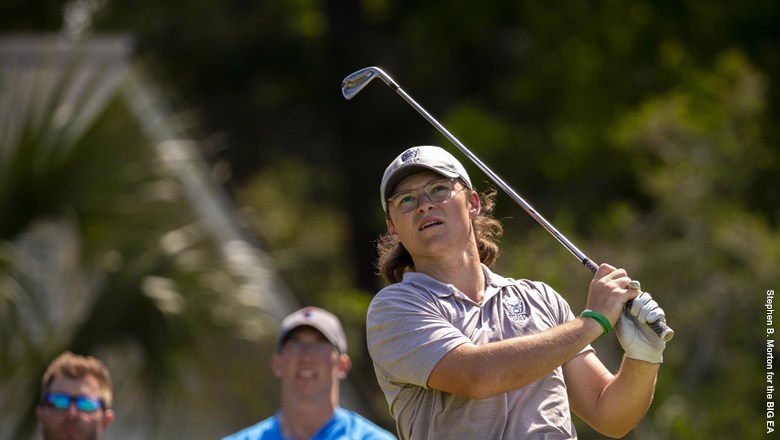 Michael Cascino stares down an iron shot at the Skyhawk Fall Classic. Photo courtesy of Stephen B. Morton / Big East.

The Butler men’s golf team finished third in the Skyhawk Fall Classic at Paris Landing State Park Golf Course in Buchanan, Tennessee on Sept. 30 to Oct. 1. Junior Michael Cascino won the individual title in a playoff after rounds of 69, 72 and 73.

Cascino defeated Murray State’s Dalton Bagwell in a one-hole playoff. Bagwell’s 72 on the final day vaulted him into a tie for the lead after beginning the round one shot back. After both players finished the 54-hole tournament with a 2-under total, Cascino parred the first extra hole to secure the victory.

The Palos Park, Illinois native entered the final round tied with Tennessee State’s Landon Albert, who fired a 79 during Tuesday’s round to play himself out of contention.

Cascino led the Bulldogs individually for the second tournament in a row. The junior began the season with a top 10 performance at the Crusader Collegiate where he also finished a 2-under.

As a team, the Bulldogs had a three-shot lead going into the final round. A final round team total of 301 saw Butler slip to third place behind UT-Martin and Bethel University, who each fired a final round of 289 as a team.

Behind Cascino, Butler had four golfers finish in the top 25 individually. Freshman Luke Wells finished in a tie for 11th at 4-over and tied the lowest round of the tournament with a 68 in the second round.

Senior Patrick Allgeier finished at 5-over in a tie for 14th. Sophomores Michael Tanaka and Raymond Sullivan rounded out the starting five for the Bulldogs, finishing in a tie for 24th and 43rd, respectively.

Four Bulldogs competed as individuals at Paris Landing, including senior Logan Sabins. Sabins finished in a tie for seventh after rounds of 72, 73 and 72. The New Jersey native was the second-highest individual finisher for Butler behind Cascino.

The host team, UT-Martin, won the event by six strokes over Bethel. The Skyhawks had all five golfers in their starting lineup finish in the top 20 individually. Bethel finished second and Murray State and Arkansas-Pine Bluff rounded out the top five with the Bulldogs.

Butler returns to the course Oct. 14-15 when they travel to Beallsville, Maryland, to compete in the Georgetown Intercollegiate at Four Streams.