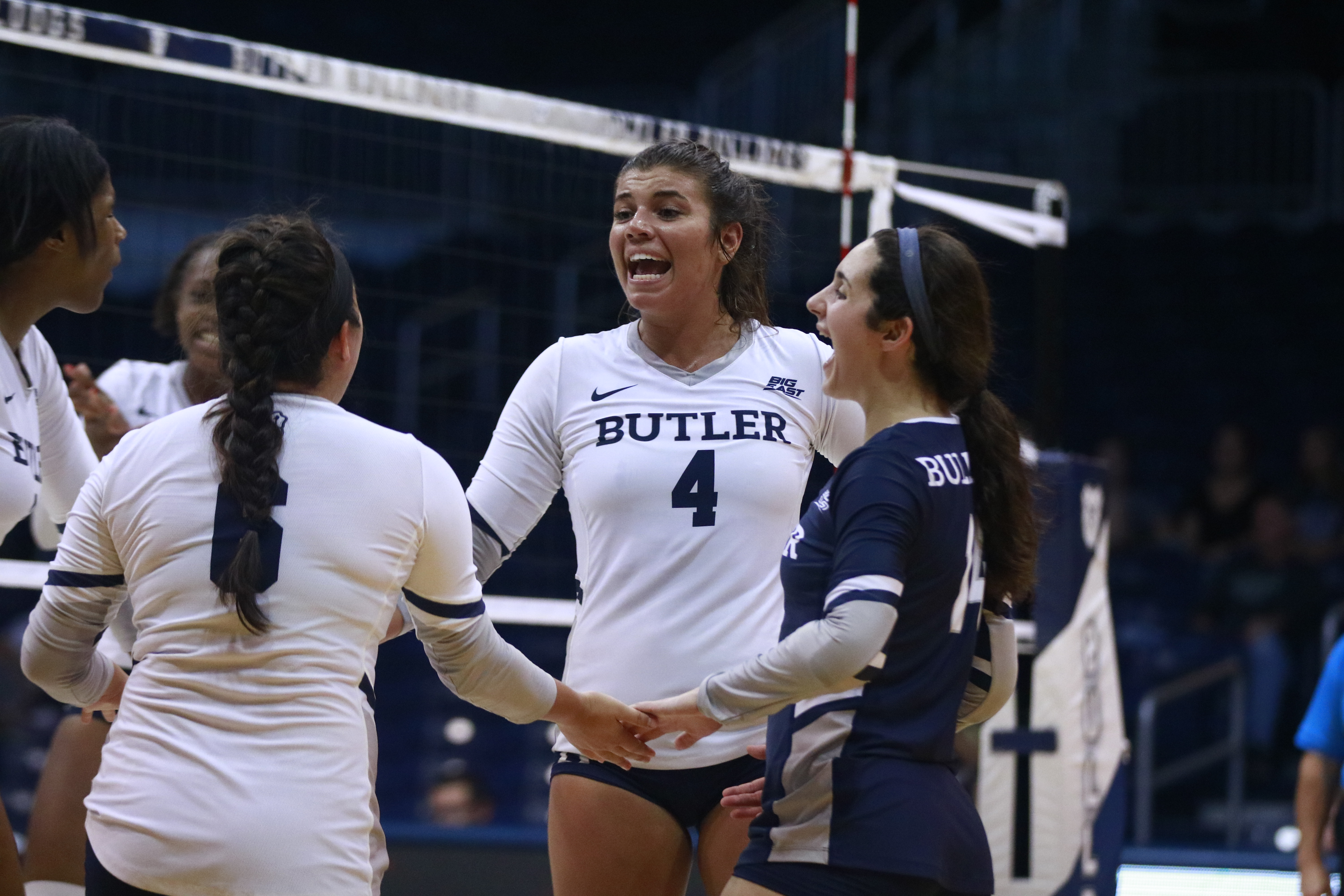 Butler women’s volleyball is ready to compete. After a rocky season last year, finishing seventh in the Big East, the team is prepared to bounce back.

This offseason has been full of strength and endurance training both on and off the court.

“In the offseason, we really focused on developing our skills and getting stronger,” Logan said. “We worked with our strength coach T.J. Greenstone to get us volleyball strong — a lot of legs and shoulder repair so we are able to last the four months of our season.”

This endurance has already been put to the test. The Bulldogs opened up play at the War Eagle Invitational competing against New Mexico State, Tennessee State and Auburn, going 1-2 on the weekend.

“We showed some really good potential at our Auburn game,” Logan said. “It was a close one and we went to 30 twice. We had a lot of really good moments and showed that we can stand with these really good teams.”

Logan is back this season after missing out on all of last season due to an injury. The rehab time gave her the ability to hone in on her leadership and prepare for her final season. On Aug. 1, she was the only Bulldog named to the Preseason All-Big East team.

“Anna makes such a huge impact every day by her leadership, and she is a smart player, so her volleyball IQ helps the team,” head coach Sharon Clark said. “We have several young players on the team so I think she has been instrumental in mentoring them and will continue to do that.”

As for the newcomers to the team, Butler has three true freshmen. Freshman Megan Sheridan has stepped into a starting role as an outside hitter and was recognized on the all-tournament team during the first weekend of play.

“Sheridan getting all-tournament team was huge for the confidence of the team and for herself as well,” senior setter Megan Ramseyer said. “Coming in as a freshman is often overwhelming for volleyball because it’s so fast paced, but she is fitting in well.”

The team has two overall goals: to win the Big East and make the NCAA Tournament. The Big East conference poses tough competition in every match.

“There’s not really a weak team in the Big East, so I think it’s awesome that we have a good competition all the way through the season,” Ramseyer said.

Only the top four teams in the standings can make it into the Big East Tournament, and the 3-7 spots tend to be decided by a game or two.

“Creighton and Marquette are the top of our conference and they are usually top 25 in the nation,” Logan said. “They are solid volleyball teams and will always put up a good fight. By having them in our conference, they elevate our whole conference play.”

A main strategy for the season is to not let a team beat Butler twice. With the tough competition of the Big East, this strategy is crucial to making it to the Big East Tournament and the NCAA Tournament.

Last year the team primarily struggled with close, five-set losses. The Bulldogs failed to win any games that went to five sets.

“Certainly one of the things that we want to do is conquer our mental toughness to be able to tough out some of those really close matches better than we did last year,” Clark said.

This year, there has been a lot of preparation to avoid those tough losses.

“We have been working on changing our mentality to every point matters,” Logan said. “We are always saying, ‘hey, we have to be the first on the board, the first to five, the first to ten.’ Setting those little goals each set has helped us not go in to all those five setters.”

Leadership has also been a main focus for the team.

“We talked a lot about leadership this season and how everyone on the court is a leader, and that we all need to realize what our leadership goals are within our team,” Ramseyer said. “Some lead by verbal communication, others by example, but I think our team has done a really good job of respecting each other and recognizing whose leadership role is what.”

While they may not all have the same leadership role, the players all have one motivation in common.

“We really are trying to push the mentality that we are playing for the people next to us,” Logan said.

A crucial point for the team this year is to win the serve and pass game, and get in the flow of the game faster than the opponent. This past weekend the Bulldogs struggled with that idea in their three losses at the Hampton Inn Bowling Green Invitational.

With two weeks left before Big East play begins, the team is working hard to find their groove. Next weekend, Butler opens up a home stand with the Bulldog Brawl tournament. The Bulldogs will host University of Pacific, Belmont University and Loyola Marymount University.

Big East play will begin on Sept. 25, when the Bulldogs take on the Marquette Golden Eagles. The team will close out Big East competition against two top teams, Creighton and Xavier at Hinkle Fieldhouse in late November.

For now, Clark has been impressed by the approach her team has taken to begin the season.

“Great energy team, good character, and they work hard, so as a coach you just can not ask for more than that,” Clark said. “We really have not had a team with this kind of togetherness and work ethic; that real support of each other, we haven’t had that for the past year. So, it is nice to see that back in our culture and in our gym.”