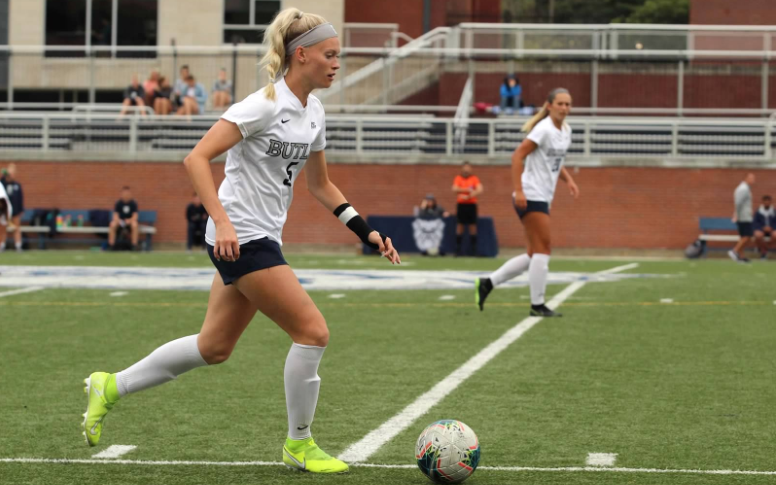 Amanda Kowalski brings the ball down the field during a game this season. The women’s soccer team is now 5-3-1 following a draw at Utah on Sept. 20. Chandler Hart/Collegian file photo.

The men’s golf team opened its season early this past week at the Crusader Collegiate in Chesterton, Indiana. The Bulldogs finished fourth overall following a strong performance on Tuesday, the final day of the tournament.  Butler played the second-best round out of the 15 team field on the final day. Junior Michael Cascino was the top performer for the Bulldogs, finishing the tournament tied for eighth overall.

The men’s soccer team played two games this past week.  On Sept. 17, the Bulldogs lost to SIUE on the road in double overtime. Butler stuck first in the eighth minute with a goal from sophomore Griffin DeBolt, but struggled to create chances for much of the game. SIUE scored the equalizer in the 60th minute and the golden goal in the 109th minute to secure the win.

On Sept. 20, the Bulldogs fell 3-0 to No. 3 Georgetown at home in their Big East opener. Butler kept the Hoyas scoreless in the first half, but conceded a goal only 90 seconds into the second. Two late goals iced the game for Georgetown. The two losses put Butler’s record at 3-3 heading into two more games against top 10 opponents next week.

The women’s soccer team finished their nonconference schedule on Sept. 20 with a 0-0 draw against Utah in Salt Lake City. Both teams had plenty of chances, but strong goalkeeper play on both sides kept the game scoreless. Butler now sits at 5-3-1 heading into its conference opener at Seton Hall next week.

The volleyball team had another busy weekend, playing three matches at home as part of the Bulldog Brawl. On Sept. 20, Butler fell to Pacific 3-2 in a match which had 15 ties and seven lead changes.

On Sept. 21, the Bulldogs split their two games. In the first game, Butler swept Belmont 3-0 behind 15 kills from senior Brooke Gregory. In the second game, the Bulldogs lost to Loyola Marymount in 3-1. After the weekend, Butler’s record sits at 3-9. The Bulldogs begin conference play next week at Marquette.

The football team suffered another tough loss on Sept. 21, falling 49-7 at Princeton. The Bulldogs played the game without starting quarterback Sam Brown. In his absence, redshirt senior Cameron Towns and freshman Nick Orlando both took snaps under center. The Bulldogs have a bye week next week, giving them more time to prepare for their conference opener at Stetson on Oct. 5.  The Bulldogs’ record now sits at 1-3.