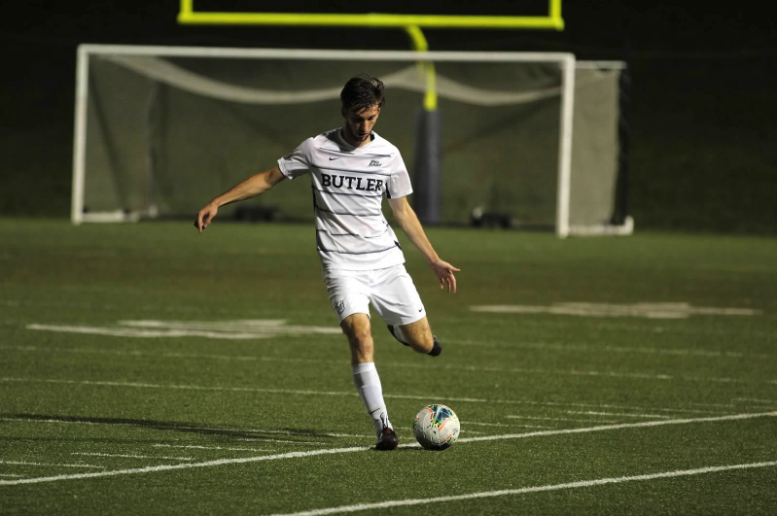 Griffin DeBolt kicks the ball in a match against Wisconsin. DeBolt scored his first collegiate goal in Butler’s 2-1 loss to SIUE. Photo by Chandler Hart.

The Butler men’s soccer team suffered a 2-1 loss at Southern Illinois Edwardsville on Sept. 17. The Bulldogs struck first on a corner kick when Jack Haywood connected with Griffin DeBolt in the eighth minute. From that point, the Cougars controlled the contest, converting an equalizer in the 60th minute and winning the game on a 109th minute goal at the end of the second overtime. We go beyond the box score of Butler’s second loss of the season.

Butler came out strong, putting pressure on SIUE and getting multiple early opportunities including a corner kick in the 8th minute that resulted in Butler’s only goal of the game. From that moment forward Butler only managed five more shots and one more corner. The Cougars, on the other hand, flipped a switch and put the Bulldogs on their heels, especially in the second half. In the second frame, SIUE put seven shots on goal and got five set pieces from corner kicks. The chances were due, in part, to Butler’s inability to string together passes in their own third, turning over the ball multiple times, which resulted in chances for SIUE.

The Cougars ended the game with 22 shots, 11 of them being on frame, compared to Butler’s six shots all game. Butler goalkeeper Gabriel Gjergji was a bright spot for the Bulldogs making nine saves during the contest. The sophomore bailed the Bulldogs out on multiple occasions in the second half and was key in forcing overtime.

Part of Butler’s offensive struggles came with the absence of senior forward Brandon Guhl. Guhl missed the game due to an injury sustained against Wisconsin on Sept. 12. Butler’s opportunities were scarce against the Cougars but when they did come they often came on set pieces. The Bulldogs missed Guhl’s offensive threat that usually alleviates pressure from other Bulldog goal scorers. While six different Bulldogs recorded a shot, nobody managed more than one shot and only four of those attempts ended up on frame. In the four games that Guhl has played this season, Butler has recorded double digit shots on all four occasions. There was a significant decrease in opportunities without Guhl in the lineup.

Butler’s next three games all come at the Sellick Bowl. However, each of the next three opponents are ranked in the top 10 of the most recent United Soccer Coaches Poll. Butler begins Big East play on Sept. 20 against Georgetown University, the defending Big East champions and the No. 3 team in the country. Indiana University then makes a visit as the No. 4 team in the country on Sept. 24. The Hoosiers haven’t lost yet in 2019 and have wins over University of Pittsburgh and UCLA. After a non-conference contest against Indiana, the Bulldogs return to Big East play against the St. John’s Red Storm. The Red Storm are 6-0 to begin the season and have the 13th-best scoring offense in the country. Butler doesn’t have much time to correct issues on both ends of the field. If they don’t, they could be staring down the barrel of a four-game losing streak.