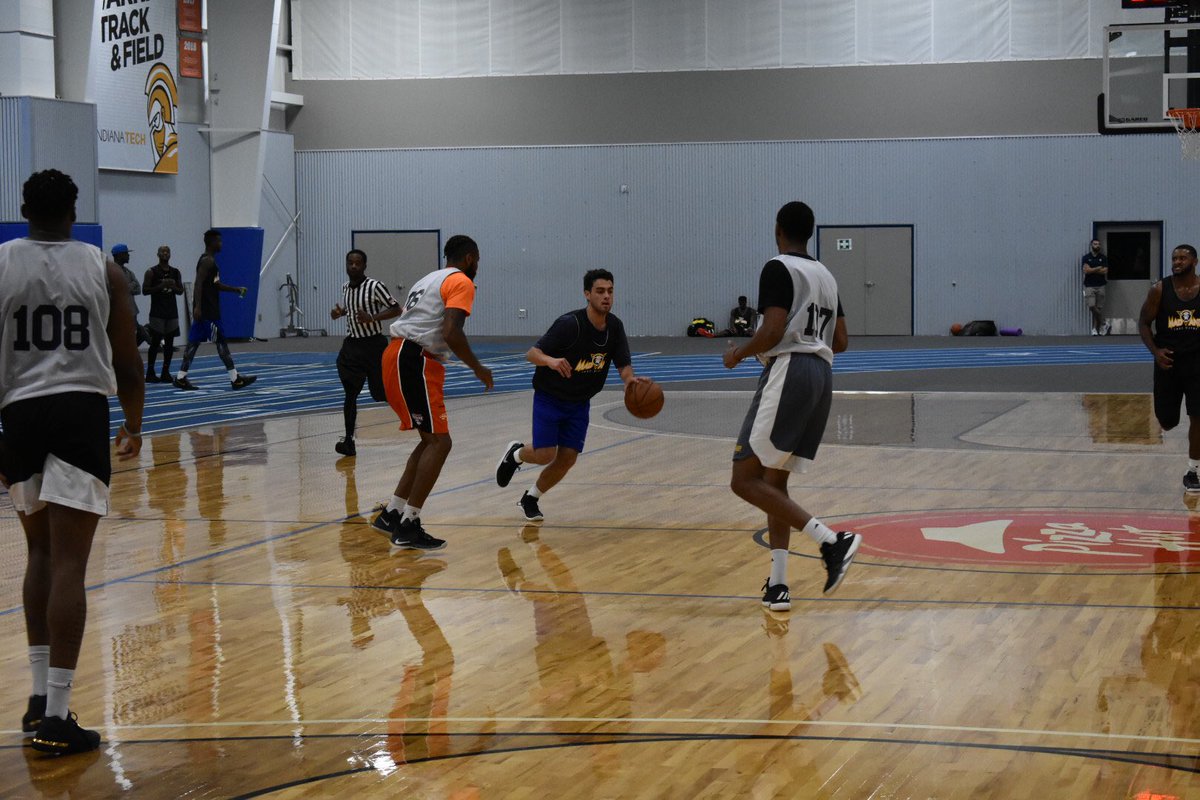 Drew Favakeh brings the ball up the court during the open tryout for the Fort Wayne Mad Ants. Photo courtesy of Drew Favakeh.

My body was shivering, either from the weather or seeing who was lined up next to me. Standing outside, waiting for the Plassman Athletic Center at Turnstone doors to swing open at 9 a.m., my peers towered over me. Some were flexing their Nike shooting sleeves and Adidas headbands, others were tying their glistening Jordan shoes.

Right away, I was a fish out of water trying out for the Fort Wayne Mad Ants. Every year, they hold this tryout and hopeful NBA players flock to the gym in attempts to show they can be the future of the team.

I was trying out so I could get a feel for the process and what it takes to make the team. My mind was happy, but my body hated me. Although I expected to get dunked on numerous times, I tried to remain positive.

After all, I had always been the smallest kid in the gym, the foundation of my basketball playing career was built on diving for loose balls and taking charges. I like to say I am the unofficial official charge leader in my high school’s history.

Don’t get me wrong, I was talented — I advanced to the regional round of the 3-point contest in high school. But I wasn’t a Division I athlete and talking to the imposing players next to me in line, it seemed everyone played in college.

As the players began to flock inside the gym, I was taken aback of the sheer amount of bodies who hoped to manifest their dreams.

I gave up on my dream years ago and hadn’t played competitive basketball in 940 days. By now, my six-pack had sludged into a dad-bod.

As I stood in line, waiting to dot the line that signed away my life, I pondered many thoughts and came up with a few convictions I couldn’t shake. First, I wanted to make sure my performance didn’t impede these players’ dreams. Many of these players were fathers, hanging onto the thread of their NBA dream as they traversed country-wide for G-League tryouts like this one.

I would pass easy shots up and play tough defense, like I always did. It wasn’t easy though.

10 a.m. hit, and head coach Steve Gansey called all the players to mid-court. It seemed even more bodies filtered into the gym, and they sprouted an inch for every passing minute. My body tensed up and reality kicked in: I was trying out for a pro team.

Coach Gansey wrapped up his speech trudging on about hedging screens, forcing baseline and not over-dribbling. At the end of the speech, players at each end of the court broke out their dunk contest-worthy slams, cocking back their arms like elastic men and flying through the air like Superman. You could hear oohs and ahhs of spectators. While the dunks rattled the rims, scouts and coaches were frozen with blank expressions.

The coaches were optimistic, but if there was giddiness, you couldn’t tell. Gansey saw high-flyers, but dunking isn’t the end-all-be-all to basketball.

“Right now we’re going to have a meeting with all the coaches and my staff and my GM, Brian Levy, and we’re going to be scouting who we like,” Gansey said.

When it was time to group into our assigned teams, I peered up at the clock: 11 a.m. Time was flying by. When I sauntered over to my group, I masked nervousness with a false sense of self-confidence. But once I saw the players, I was encouraged to see a few guys more out of shape then me. I was ready to play, but my coach thought otherwise.

Running us though typical Mad Ants plays, my whole group groaned. If I could speak for the group, I’d say we collectively thought: “We came here to ball, not learn an offense we won’t even run in the scrimmage.” But our coach, with his gold necklace, black sweatsuit and chest hair fully exposed — exuding the aura of a hard-nosed 1980s casino owner — thought otherwise.

By noon, our eccentric coach huddled us up, telling us to have fun yet play exclusively to our strengths. Practice was a time to improve upon weaknesses, the scout wanted to see the immediate impact you could make to the team.

Then, our hands touched in the middle of the circle and we bellowed out a flimsy yell, “TEAM!” It was funny because players on teams know each other, but we called each other by the assigned numbers on our back. I got a kick out of calling a player, “167.”

The games lasted 40 minutes — two 20-minute running clocks. Coach gave us all a chance to play since everyone paid the same steep price of $200. The clock started to tick and all my fears washed away, replaced by anxiousness. This was my last competitive game. All I had to do was be myself.

My first play, I wanted to make an indent on the executives seated above us on the track and the guy in the red — the scout — watching our game. I immediately pressed full-court and dove for a loose ball, accelerating our fast-break. Then, I hit two floaters on consecutive possessions, one over a 7-foot-4-inch player. This wasn’t so hard.

We were up by 10 when I subbed out. My coach’s cheshire grin — like seeing a gambler gambling away a jackpot — and a pat on the back, reaffirmed my confidence in myself. He proceeded to start me in the second half. Quickly, self-confidence morphed into arrogance. I got too comfortable thinking I belonged.

Everything tumbled downhill from there.

The second half I committed two early turnovers and any confidence I had was destroyed. There were only two games and once you made a few mistakes, your teammates lost trust in you, I quickly realized.

Were they icing me? When you don’t touch the ball, it’s difficult to get in a rhythm, I learned. When everyone was trying to prove something, the ball stuck to players’ hands like glue.

Generally, I like to consider myself quick and athletic. However, I soon faced the reality that these guys were simply on another level athletically.

In the second game, my drives were stymied by the quick point guards who guarded me. By the end, the box score read eight points, but the eye test appeared like trees falling in a silent forest. We were up by 20 for most of the game, and my points came late in the second half.

Despite the win, my team never developed natural chemistry, and coach Gansey recognized the difficulty in playing with random players at a tryout where everything was on the line for most players.

On a positive note, Coach Gansey handed me major participation points, which will keep my ego afloat in the coming days.

“I saw you getting after it,” he said. “You were picking up early, I think you should have gotten the ball a couple times, but you played hard, that was good. I tell you what: you got after it, you got on the floor a couple times.”

At 2:33 p.m., after my 940-day hiatus, I officially announced my retirement from the game of basketball.