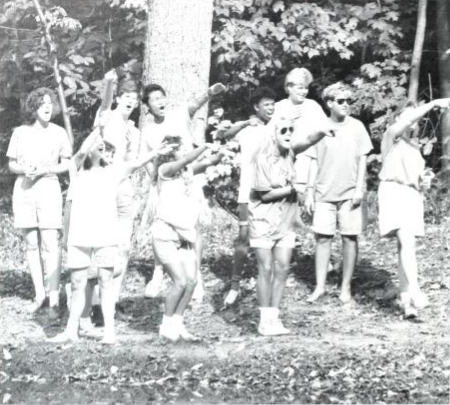 Students cheering at a Homecoming event. Photo from 1990 edition of The Drift.

Oh, Homecoming. The one day a year everyone at Butler piles into the Hinkle parking lot surrounded by rowdy frat boys who are living out their glory days and dads who are reminiscing their own. From the Bulldog Beauty Pageant to the famous Yell Like Hell event, the whole week is filled with fun activities for everyone. From crazy times tailgating to crazy plays on the field, Butler students share the best Homecoming and gameday stories they have.

Senior AE: “Waking up at 5 to make a breakfast for my group of friends last year. We all went to my friends senior house and three of us started getting everything ready at 5:15 and made food and drinks for everyone. I went out to the bars the night before too so I only had 3 hours of sleep so that was rough but worth it! Homecoming is my favorite day of the year!”

Sophomore KT: “We got together at 6:30 in the morning to start getting our hair and makeup done. We also had to make our outfits which took a while. We forgot to buy Butler T-Shirts so we had to drive to Target to try to find T-Shirts to DIY”

Senior AT: “My mom and dad hosted a tailgate with all of their college friends at homecoming last year,” she said. “My mom challenged me to drinking games because ‘I could not hang like her yet’. We both ended up on the floor in my AV apartment bathroom both not being able to hang after the game. What a crazy mother daughter duo!”

Junior JB: “My freshman year, I had to sleep over at Delt because I could not make it back to Res-Co. I slept on the bottom bunk and my friend slept on the top bunk. He said that he was sleeping there sooner than he thought he would because he was hoping to rush Delt that year.”

Senior James Cecil: “I broke a finger playing flag football for homecoming my sophomore year. We won the championships and I had a cast that made me look like Captain Hook for the week which was fitting cuz our team’s theme was Peter Pan.”

Senior Carter Raleigh on the 2015 homecoming game: “It’s homecoming so it is packed in the Bowl, so it is exciting and everyone is going crazy, so we really wanted to show out for the fans. We were down the entire time and finally had the opportunity and drove hard. We had about a minute left and our offense kept driving. We kept hammering and hammering and Brandon Collins caught the one-handed touchdown so that was crazy and very fun. To be down the entire game and win 25-24 was crazy. The crowd went wild and the team and coaches were all pumped.”

Hopefully we can all witness a crazy game like the 2015 game this Saturday at the Bowl.