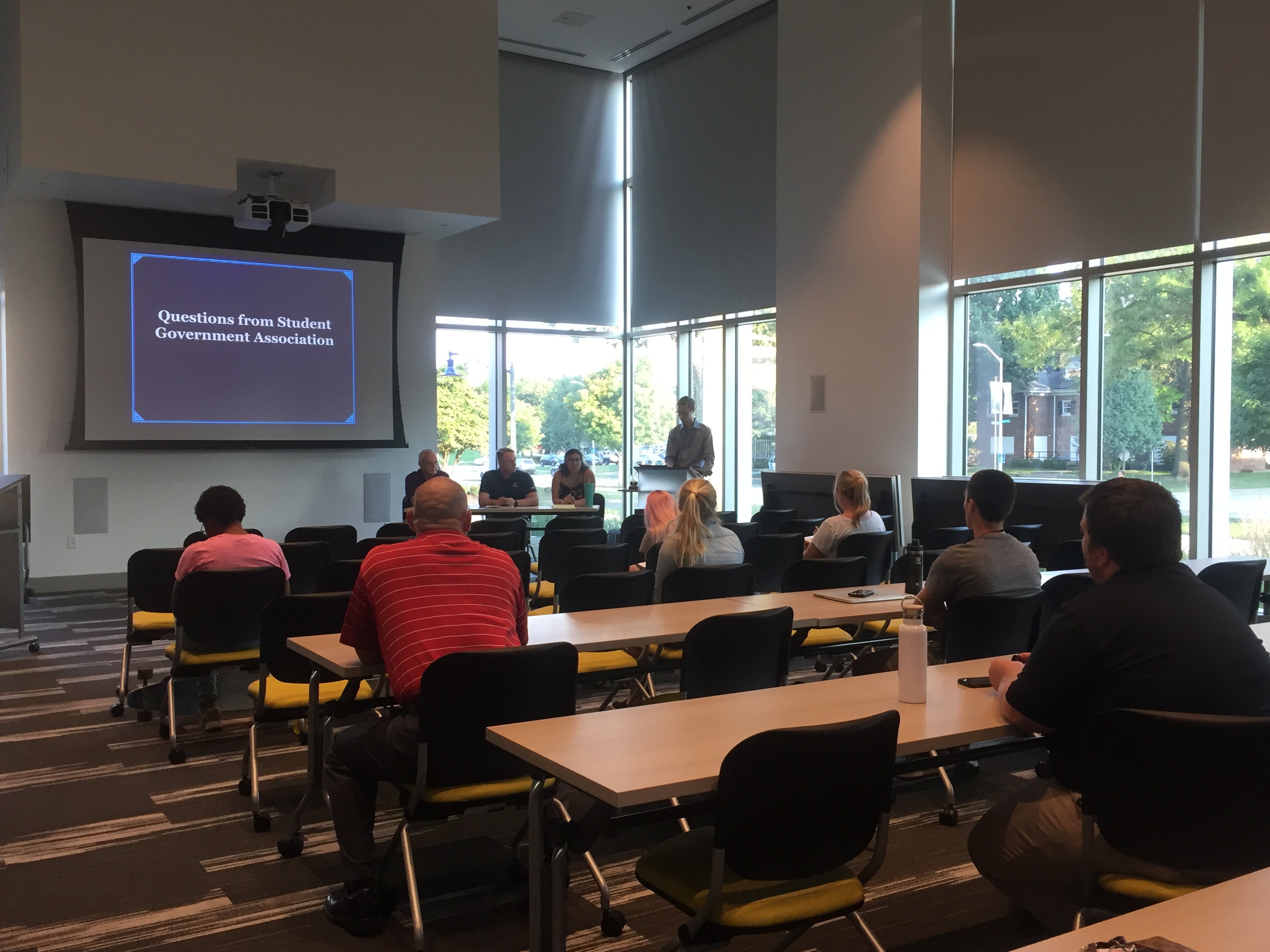 Students gather inside Irvington House for a town hall meeting with SGA and BUPD after recent suspicious activity near campus raised safety concerns.

On Sept. 18, BUPD responded to an incident along Hampton Drive involving a female student who was approached by two strangers in a black van. BUPD has received numerous called regarding suspicious activity on Hampton Drive within the past two weeks.

BUPD Chief John Conley; Frank Ross, vice president of student affairs; and Liv Jacobs, chair of SGA’s BUPD Relations Committee, spoke on a panel moderated by SGA president Sam Varie. SGA sponsors town hall meetings during times of heightened student concern. Almost a dozen students were present. The meeting was streamed on Instagram, where as many as 145 viewers tuned in.

Conley said BUPD engaged in conversations with several individuals in the area who owned vehicles similar to those described in phone calls. Conley said he personally stopped a man in a silver car who turned out to be a dining services employee on break.

“Was that the silver car that was originally seen? I don’t know,” Conley said. “We have yet to have anyone confirm for us if these are the people they called in.”

Other identified individuals include the owner of a truck, who was using campus Wi-Fi between delivery runs for Scotty’s Dawghouse. Another individual was seen outside the Phi Kappa Psi fraternity house waiting for an Uber.

“We didn’t find anyone standing around that didn’t have legitimate business on campus,” Conley said. This was also emphasized in a public safety message from BUPD to the student body on Sept. 13.

He said these reports made it difficult to target activity, and that students may have a different perspective of what constitutes as suspicious activity. He urged students to call immediately with a good description of the suspect and to describe what that person is doing to raise suspicions.

The meeting proceeded with Varie asking questions to the panel on behalf of students and SGA. Some of the concerns addressed was the availability of the Dawg Ride service, the absence of Dawg Alerts and BUPD dispatch wait times.

In regards to Dawg Alerts, Conley explained that his department is mandated by federal law to send alerts for active crime that poses an ongoing threat and are confined by the law’s definition. He said BUPD is trying to be more active on social media and are open to exploring new methods of communication between students and his officers.

Students are also encouraged to let someone know when they experience longer wait times for BUPD dispatch, as there is only one dispatcher working at a time.

AJ Matthews, a senior human communication and organizational leadership major, attended the town hall meeting to have a face-to-face interaction with BUPD and to ask questions directly.

“It was addressed enough in a way I kind of know they have to address things,” Matthews said. “They have to follow things a certain way. Everything’s in a system. Of course not everything we want to happen will happen.”

If you have a concern about suspicious activity on campus, call BUPD at (317) 940-9396. This number can also be found on the back of every student ID.

The Butler Collegian will continue to follow this story and update accordingly.