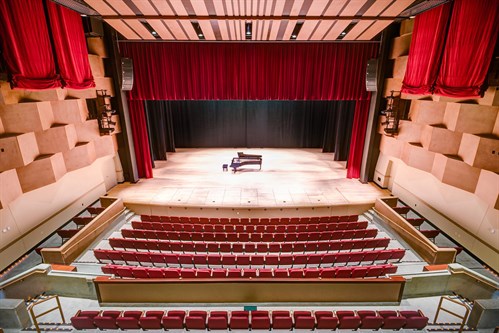 Butler Opera Theatre will perform Nov. 10 through 12 in the Schrott Center for the Arts. Photo courtesy of the Butler website.

This weekend, students involved in Butler Opera Theatre will perform excerpts from several famous operas in their performance of Butler Theatre: Opera Scenes and Arias. The performance will be held in the Schrott Center for the Arts on Nov. 10 and 11 at 7:30 p.m. and on Nov. 12 at 2 p.m.

The performance will include music from classic operas such as “Marriage of Figaro,” “La Traviata” and “Susanna.” Students will perform songs that are in Italian, French, German and English.

James Caraher, who will be the conductor and a pianist for this performance, said he tries to involve as many undergraduate students in the opera program as possible, even if it’s a challenge for some.

The students involved are up to the challenge. Lisa Buhelos, a sophomore vocal performance major, said performing opera, especially songs from a variety of different operas, is valuable practice for the future.

“By doing scenes from multiple different operas, not only do we get a chance to learn more about different operas, but everyone gets a moment to shine and showcase their talents. We get experience with roles that we might one day play,” Buhelos said.

Caraher said that the opera program decided to perform songs and arias from multiple operas not only to benefit the students but also to give the audience a taste of the diversity of opera.

“The music was chosen with both the singers and audience in mind. I always try to find a balance between musical styles, different languages, comedy versus tragic and a nice mix of solos and ensemble pieces,” he said.

Caraher also said live opera performances are valuable for audiences because they are some of the only vocal performances that do not use microphones or amplification devices.

“Singing in a theater without amplification is an athletic event, and most people these days assume that microphones are being used,” he said. “So once the realization sinks in that these folks are actually filling the space without any electronic help, they are, and should be, impressed.”

“The greatest thing about doing opera is creating art with your friends, and enjoying the results through the whole rehearsal process created. It’s immensely rewarding,” she said.

Tickets for Butler Opera Theatre: Opera Scenes and Arias are $15 for general admission, and $7.50 for students. They can be purchased at the Butler Arts Center website.