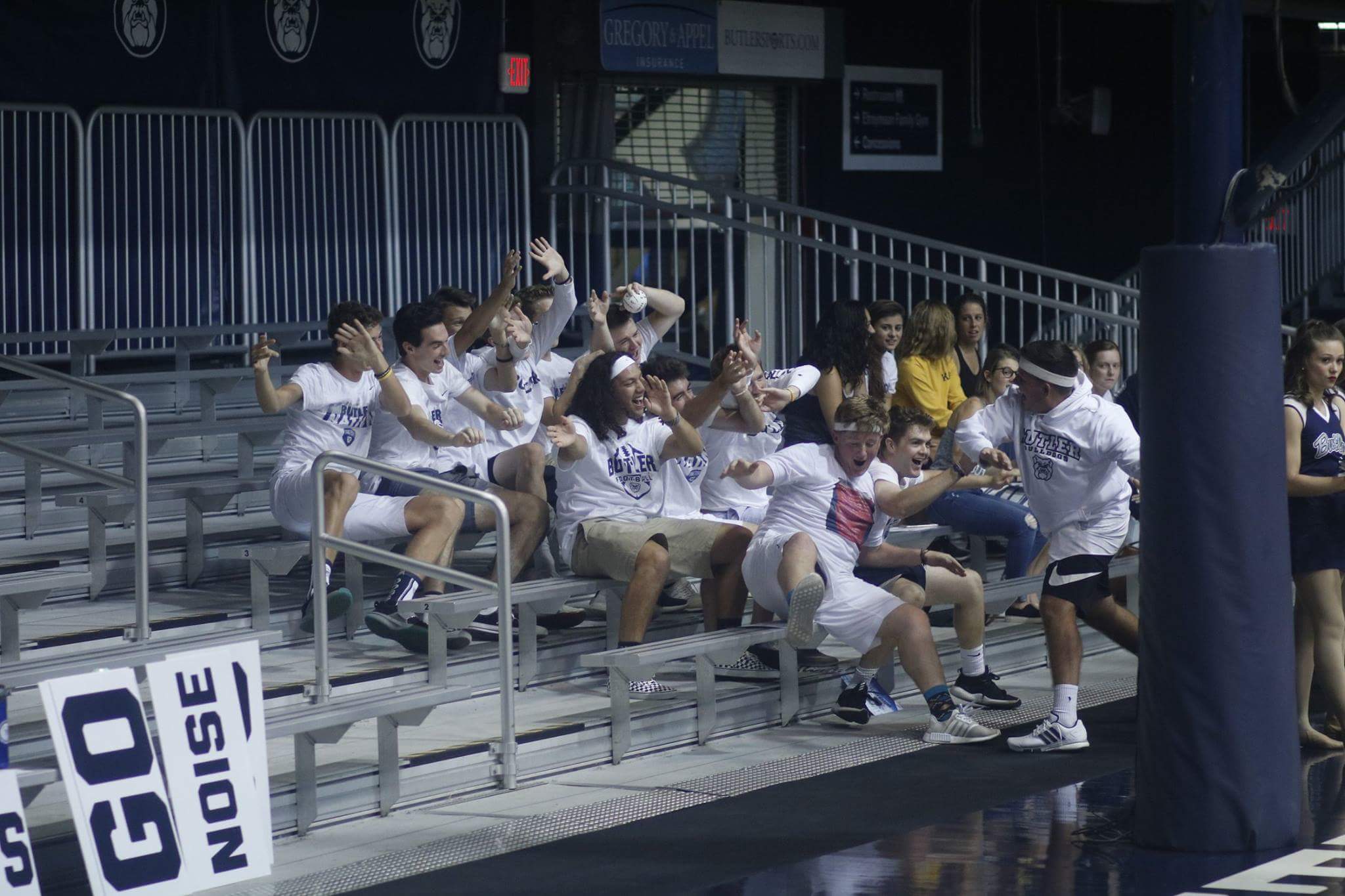 The Bleacher Baddies do the wave cheer during a timeout of the DePaul game on Sept. 27. Photo by Jimmy Lafakis.

Junior outside hitter Anna Logan puts down another service ace. She waits for the roar. It’s coming.

That chant comes from the Butler University volleyball team’s student section. They call themselves the Bleacher Baddies. The group now contains about two dozen first-year students who coordinate themes before matches. During timeouts, they perform the wave and the roller coaster cheers.

The student section’s story begins at halftime of the Butler–Taylor University football game in September. First-year pre-pharmacy student Brian Weber and a dozen friends were attending the game and decided to walk in Hinkle Fieldhouse and check out the Butler-Ball State volleyball match.

The student section that started on a whim was born.

The students cheered after every Butler point and kept the wave going. The cameraman started featuring the group on the Jumbotron, feeding into their hype. The Baddies were just getting started. Fellow members call Weber the captain and ringleader of the group.

“We came back from the game saying to all our friends that we got on Hinkle’s jumbotron 11 times,” Weber said. “Yes, 11. Our lives were complete now that we were on the Jumbotron at Hinkle.”

The group’s name was an accident. One member suggested “Bleacher Buddies” at the match against Ball State University. The nickname was misinterpreted as “Bleacher Baddies,” but it worked. The group vehemently agreed. They were the Bleacher Baddies.

Their chanting, cheering and roller coaster-ing had a ripple effect. Their passion for the game and infectious Butler spirit caught the eye of Jamie Ingram, a Butler volleyball volunteer marketing assistant.

Ingram first approached the group at the Butler-Marquette University match four days after the match against Ball State. Ingram deemed the Baddies ready for Big East action. She told them to keep doing what they were doing.

“I saw this group of guys that brought energy, passion and enthusiasm,” Ingram said. “I couldn’t help but go up to them and say thank you for recognizing how important these ladies are and how hard they work.”

Weber is no stranger to dedicated fan sections. He graduated from St. Xavier High School in Cincinnati, where he participated in the Baseline Bombers basketball student section. Weber said wanted to bring the same athletic passion to Butler.

“We would go crazy about anything and everything,” he said. “I know here at Butler, it is that way with basketball, but it doesn’t seem that way for a lot of other sports. Our goal here is to have a full student section for volleyball.”

The Baddies coordinates with the cheerleaders and dance team to perform specific cheers during games. As the ball is passed around Butler’s side of the net, a chorus of “Let’s… Go…. Dawgs…” echoes throughout Hinkle.

“They have taken the fan section and made it their own,” Ingram said. “They incorporate everybody and love having new people coming in. I love how organized they are.”

The Baddies have also impacted the players. Logan, an outside hitter, said the group builds into the momentum of the game.

“When our opponents go on short runs, their extra support and cheering can bring us out of a slump,” Logan said. “When we’re on runs, they really keep moving upward. They’re dedicated fans, and their support is amazing.”

First-year marketing major Paul Dorskind serves as one of the loudest and proudest Baddies. The California native did not know anyone at Butler before arriving on campus.

“It not only helps the volleyball team, it’s helped me become closer with a lot of other first years,” Dorskind said. “We are bringing more and more people to the volleyball matches and broadening the Butler community itself.”

The group aims to continue the support, both through attendance and social media. The group spreads the word about new themes and cheers on Twitter. Weber said he believes other Bulldogs can catch the wave.

“This is not just a thing,” Weber said. “It is a movement. Volleyball is such an underrated sport because it’s so fast-paced and keeps you on the edge of your seat. It is so hard not to get hyped.”