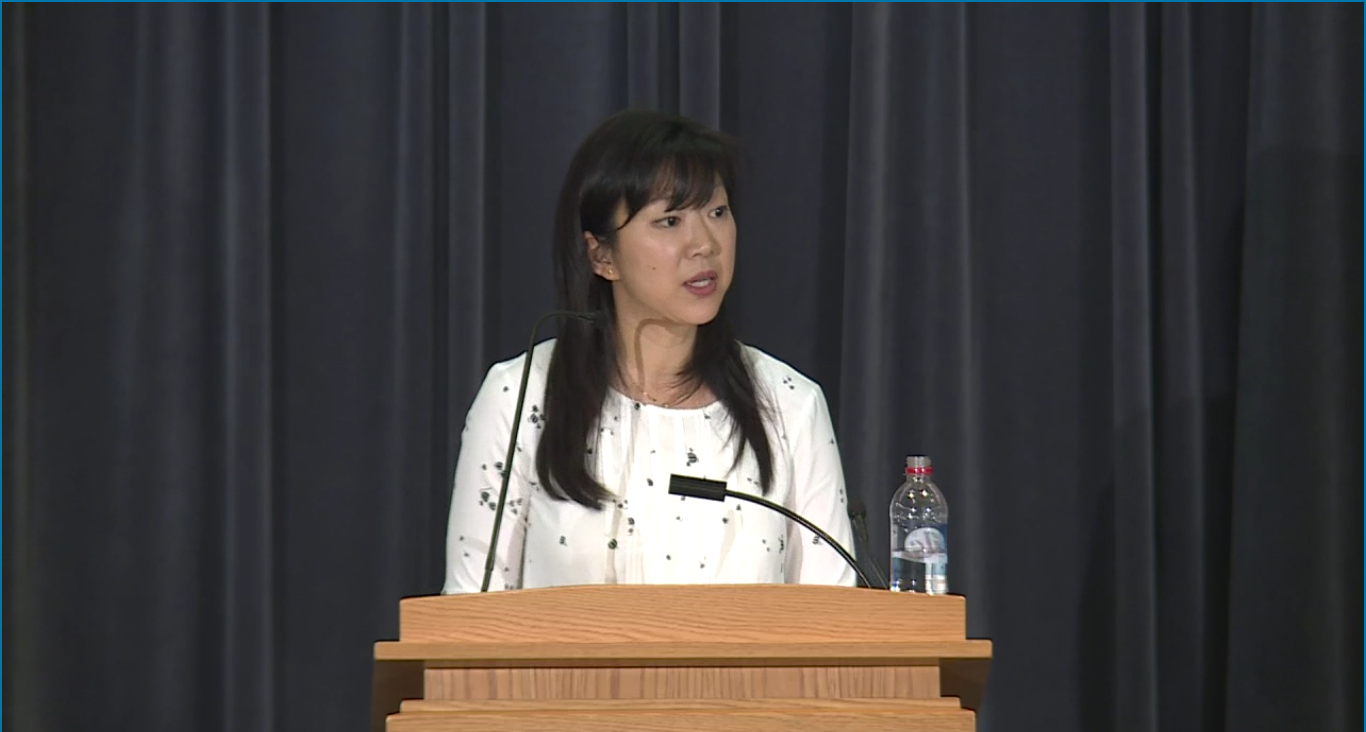 Poet and lawyer Monica Youn speaks at a poetry reading in 2016. Photo courtesy of Wikimedia commons.

Youn has also been featured in publications such as The Best American Poetry, The New Yorker and The Paris Review.

Youn has received poetry fellowships from the Library of Congress, the Rockefeller Foundation and Stanford University.

Earning a Bachelor of Arts degree from Princeton University, a Juris Doctor degree from Yale Law School, and a Master of Philosophy degree from the University of Oxford, Youn is an especially trained academic.

Until 2013, Youn was a lawyer first and a poet second, specializing in media and entertainment law and eventually public interest election law.

According to an interview with the Rhodes Project in 2013, Youn’s focus switched to poetry when she accepted a job teaching at Princeton University and Bennington College. She decided it was time to stop relegating her poetry to her irregular spurts of free time on weekends, nights and vacations and, instead, make it her primary priority.

Because of her extensive education and legal career, Youn’s poetry takes on an elevated sense of technicality. It is especially scholarly, calling on lawyerly language and form.

“Many times when we think about poetry we think about lush language and gorgeous imagery, so Youn’s analytical style is not what we usually expect,” Dunn said.

Attendees of the Efroymson Center for Creative Writing poetry lunch hour on Youn admitted that the technical, scholarly and lawyerly approach to her poetry makes her work particularly challenging. Many admitted to resorting to dictionaries and YouTube tutorials in order to understand its depth.

“When you’re a poet, you know you’re not a novelist, so you have a smaller audience,” Dunn said. “You can kind of say, ‘This book is just for me and anyone who decides they want to come along for the ride,’ so you can really ask your readers to do more work, because it’s not just for them.”

Natalie Tombasco, a MFA student in poetry, said that Youn’s legal background is what makes her stand out from the rest.

“I think she’s trying to own the whole lawyer thing,” Tombasco said. “We don’t have a lot of lawyer poets, so she might as well own it.”

Youn’s most recent collection, “Blackacre,” refers especially to Youn’s legal background, as the title is a legal term for a hypothetical piece of land.

In the poetry collection itself, Youn explores the possibilities behind what every individual is given in life, examining the intersection between imagination and fixed fact. Looking at her own life, in particular, “Blackacre” delves into Youn’s own experiences with fertility.

In the interview with the Rhodes Project in 2013, Youn described what was then her current project of “Blackacre” as what she hoped to be her “poetic farewell to the law.”

Tombasco was in awe of the collection, recommending it to all.

“Blackacre is unlike any collection I have read. Youn’s past-life as a lawyer brings a rare voice to conversations of fertility, barrenness, identity and injustice,” Tombasco said. “She constructs a landscape full of references from Peter Pan to Norse Mythology, Twinkies to Milton. This collection is one to read, and reread — taking away a gem each time.”

The combination of the legal aspects of “Blackacre” and its conceptual considerations speaks to the nature of Youn’s work.

“She’s a Yale-educated lawyer, and I’d argue the democracies of her poetics reflect this; that perhaps because she is used to working with the abstract concepts of the law, and at a very high level, in front of the supreme court, her poetic register is similarly high and abstract,” Dunn said.

Youn is one of the last visiting writers to come to campus this semester. While she is at Butler, she will be working with Manuscripts, an annual magazine that publishes the work of undergraduate students throughout Indiana.

On Nov. 1, Youn will act as the guest judge in the poetry contest put on by Manuscripts. The magazine’s staff chose five poetry pieces out of all that had been submitted, sending that select number to Youn prior to her visit to campus. While here, Youn and the staff will discuss the work, leaving Youn to have the final say in who will be named the finalist and runner-up.

A member of the Manuscripts staff will also interview Youn on Nov. 3.

Karl Agger, editor-in-chief of Manuscripts, said that Youn’s involvement with the magazine is an especially beneficial opportunity provided by the Visiting Writers Series.

“You have work that is written by your peers — this is undergraduate work — and now you have someone who is a professional, who is really talented, reading this work and talking about it with you in a space where you’re, in a way, their equal,” Agger said. “It is a round table discussion in which we all share our thoughts.”

Agger explained that this opportunity to interact with professional writers like Youn is inspiring.

“It really makes that connection between the visiting writer and the stuff that is feasible for us as undergraduates, either as magazine editors or writers,” Agger said. “It kind of bridges that gap.”

Tombasco explained that this tangibility is important in regards to poetry like Youn’s, for it makes the work more approachable, especially for students.

“Poetry has been so limited in our culture that it gets a reputation as being inaccessible,” Tombasco said. “Having a program like VWS, gives students the chance to meet the ‘[wo]man behind the curtain.’”

Dunn credited it as an invaluable program that must be taken advantage of.

“It’s one of the most important cultural resources on campus, no question. Every semester we bring in a line-up of writers that is simply top-notch,” Dunn said. “I don’t think Butler students all understand how spoiled we are by the caliber of this series — not many universities have a line-up with similar depth.”

Youn’s presentation is Nov. 2 at 7:30 p.m. in the Johnson Room of Robertson Hall. The event counts as a BCR credit and does not require tickets. It is free and open to all.