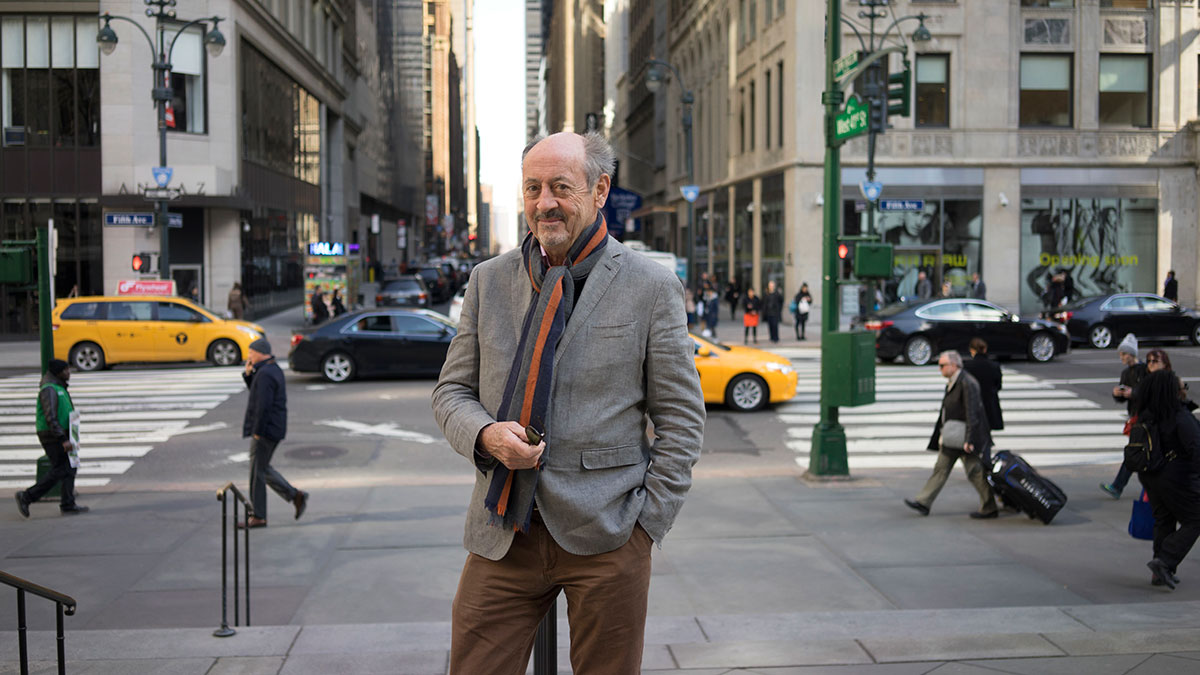 Billy Collins, a renowned poet, will be the final visiting writer of the year, replacing Louise Gluck. Photo courtesy of the Butler University website.

Billy Collins, a poet of immense critical acclaim, will visit Butler’s campus on April 18 for the Visiting Writers Series. Collins will replace Louise Glück, who cancelled for the second year in a row due to illness.

Collins, who has published 16 collections of poetry since 1977, has received a significant amount of literary honors. He served as U.S. Poet Laureate, one who is appointed as the national poet and seeks to create more appreciation for the reading and writing of poetry, from 2001-2003 and New York State Poet Laureate from 2004-2006. He also received the Mark Twain Prize for Humor in Poetry and was asked to write a poem commemorating the first anniversary of the Sept. 11 attacks.

Along with these accolades, Collins has also received fellowships from the National Endowment for the Arts, the Guggenheim Foundation and the New York Foundation for the Arts. He has taught at Columbia University, Sarah Lawrence and Lehman College, where he has the title of distinguished professor.

Collins’ work, which has appeared in The New Yorker and The Paris Review, is praised for its colloquial and witty nature, but always features a sharp turn that often leads to insightful and profound conclusions about everyday life.

His work and his place in American contemporary poetry is unique, in that he maintains a balance that gains the respect of critics along with wide appeal to the public. Regardless of the height his work has achieved, Collins remains humble, even admitting in a 2014 radio interview with Kansas News Service that his poetry is, “suburban, it’s domestic, it’s middle class, and it’s sort of unashamedly that.”

Chris Forhan, associate professor of English who teaches courses in poetry for both undergraduates and graduates in the MFA program, assists in planning each year’s slate of writers for VWS. When a poet is included in that list, he is responsible for promoting their visit and hosting them while they are here.

Forhan acknowledges that Collins’ simplistic style of writing has certainly gained the attention of many, but perhaps it is received better by the public than the critics.

“His writing is of a particular kind: direct, accessible, and witty, although by no means superficial that critics tend to have only so many things to say about it, so poets who work in more complicated linguistic ways tend to give critics more to talk about,” Forhan said.

Collins learned of his affinity for poetry at a young age, although it took several years and a variety of stages for it to evolve into what he is known for today. In an interview with Joel Whitney for “Guernica Magazine” in 2007, Collins recalled when he first discovered poetry.

“I saw a sailboat tacking its way up the East River. And I immediately had a literary response to it,” he said. “I mean, I could have been 7—I don’t know. Whenever you’re able to make letters, maybe a little older. But I wrote something down. I don’t remember what I wrote but I remember writing it. It was my first observational poem, observational poems being where the poet says, ‘I saw something and I felt something about it.’”

After this, Collins’ writing style and subject became synonymous with adolescence: moody, dark and misunderstood. This is drastically different from the work he has become renowned for. Collins explained in the interview how he evolved due to a variety of literary influences; the Beats, Wallace Stevens and Howard Nemerov were just a few of the contemporary poets that began to change Collins’ views and writing.

Forhan noted the style of writing that Collins would come to adopt can be useful in teaching classes.

“He exemplifies a certain kind of sly, subtle way in which a poem might be constructed,” Forhan said. “His work shows how close, open-eyed observation and contemplation of any given moment can make us sensitive to what is most deeply strange and uncanny about existence. He is a useful person for poets to read as they are figuring out how to put a poem together so it truly goes somewhere surprising and valuable as it moves down the page.”

Andrew Levy, chair of the English department, first became acquainted with Collins’ work in the early 2000s. Levy said it was maybe a little too ambitious to claim that Collins was the best American poet at the time, but his popularity is undeniable.

“[Collins is] probably most popular, which is easier to measure,” Levy said. “But he is also very accessible and writes about situations and emotions that are familiar to a lot of readers.”

Both Levy and Forhan agree that Collins’ poems, particularly during a reading, have interesting and simple ways of drawing the listener in, but will always end on a much more grave or melancholy note.

“Anyone who attends a reading by him is immediately drawn in and captivated, and, although his poems are conversational, they are interestingly tricky,” Forhan said. “They tend to delight and charm and then, as they progress, get more and more serious, until they leave you in the condition of directly confronting the mysteries of essential human matters, such as love, time, memory, death, and the inexplicable-ness of our merely being here, witness to the moment-by-moment happenings around us. These are poems not just for writers or English majors, but for anyone who is human.”

There will be a Q & A session with Collins at 1 p.m. today in the Efroymson Center, and his reading will take place in Reilly Room at 7:30 p.m. The event is free and open to both Butler students and the Indianapolis community. Collins will be the last visiting writer of the 2017-2018 school year.