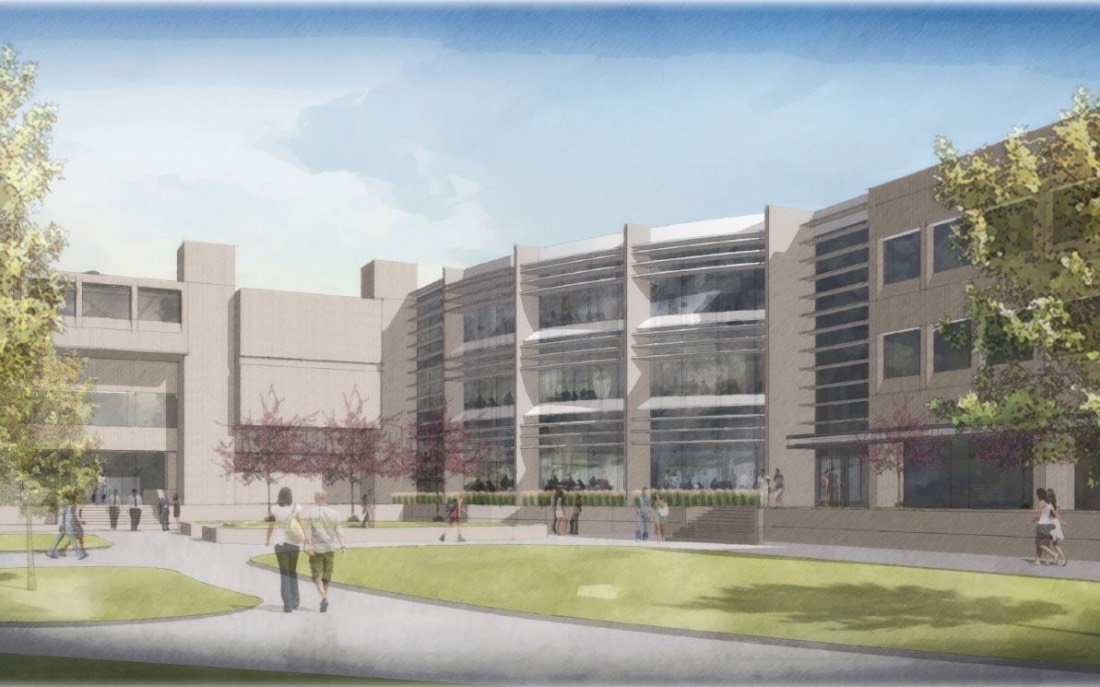 The construction plans for Gallahue Hall and Holcomb Building include an atrium where the skywalk currently connects the two buildings. Photo courtesy of Rich Michal.

As construction continues in various areas around campus, plans for a new addition to Gallahue Hall and Holcomb Building are underway.

The two buildings, which are currently connected by a skywalk, will be joined from top to bottom and have a 50,000 square feet addition added between them, said Rich Michal, associate vice president of facilities.

The project includes a large atrium between Holcomb and Gallahue, as well as renovations in Holcomb to make space for more science labs and classrooms.

The science library will be consolidated to a single floor, but will retain the same amount of study space within. The removal of the central staircase will create more open space, and Butler’s libraries are consolidating all of their books.

“There will be a time when the science library is closed,” Michal said. “We’re going to build the addition before renovating, to minimize the impact on students as much as possible.”

The building plans have been approved by the executive board, and Michal hopes that they will approve the $92 million budget sometime next semester, so construction can start in June.

Some trees will have to be cut down in the process, including a specimen tree, a dawn redwood, that was grown with the specific intent of beautifying the area.

“It’s unfortunate, yes,” Michal said. “We’ve tried, in the past, to stick to a three-to-one replacement of trees we have to cut down.”

To reduce the effects on its green spaces, Butler tries to plant three trees for every one it cuts down.

Biology professor Shelly Etnier who helped research bird deaths on campus, wondered about the new building’s windows, which are styled similar to the ones in Fairbanks.

“We actually met with architects two summers ago,” she said. “They were aware of the issue and trying to be considerate and open to the conversation.”

Etnier and her colleagues have witnessed recurring swells of dead birds during migration seasons; non-local birds will fly into windows while passing through campus.

Another impact on Butler students and faculty moving forward will be the removal of parking lots and closed off walking paths.

“I never got a warning about which walkways would be closed on which days,” she said, referencing construction by Gallahue and Fairbanks last year.

Another concern is the noise of the construction.

“Construction by Fairview, I mean, it can wake you up at 6 a.m.,” she said, regarding the construction of the new business building.

Josh Excell, fifth-year computer engineering and computer science major, recalled working at Butler’s observatory during the renovation of the mall.

“We were doing research, you know, at night, and the noise could definitely get in the way,” he said.

Etnier said that science faculty have been waiting for construction to start for years, and that they will be in a state of tumult for the next five years until the construction is complete.

“I think we’ll just have to have a sense of humor and be patient with it,” she said.

Excell also expressed waiting for updates to Gallahue, but from a different perspective. Equipment in Gallahue’s physics department can be upward of 20 years old, he said.

“You go to, say, IUPUI, where I also take classes, and they have so much more equipment,” he said. “They have a nuclear lab, an [artificial intelligence] research lab — I wish there was more funding for Butler science programs.”

The construction will move all of the faculty in both buildings, and affect students who frequent the buildings.

“It will definitely have an impact,” Etnier said. “We’ll just have to wait and see what all that is.”