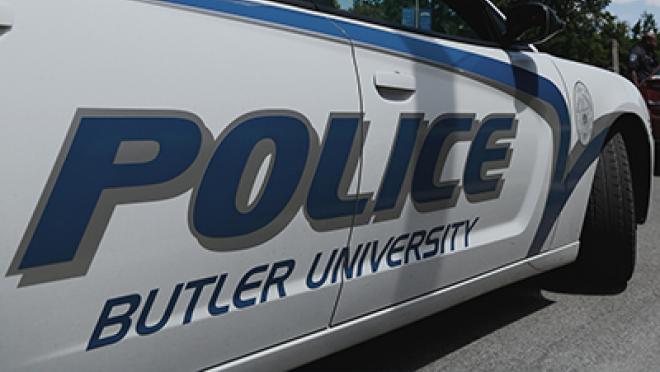 Dylan Bakr is at his friends’ junior house almost every day. They play Mortal Kombat. They watch movies together. Last Tuesday, Oct. 17, they were all meeting up at the house before grabbing lunch at Atherton Union — before Bakr, a first-year computer hardware engineering and economics major, had to go to chemistry.

“I was waiting for the round of Mortal Kombat to be over, because I didn’t want to walk in front of everyone and throw anybody off,” Bakr said. “While I was waiting, the back door got kicked in. I got hit on the side of the head and I hit the ground. Then I look up and there’s a guy standing behind me with a gun. He’s got another dude next to him and they’re yelling at everybody else to get on the floor.”

“It took [Dylan] falling on the ground for me to realize what was going on,” Van said.

On that day, at 12:30 p.m. eight Butler students were victims of a residential robbery. The house is located close to Ross Hall and the Butler University Police Department. Three students live at the house, including juniors Casey Weider and Jamie Dorris.

Dorris was coming from class when he approached a friend on the porch. She told him not to go in. One of the intruders had opened the door upon the friend knocking, and they told her to leave.

Dorris, confused as to why he could not come in his own house, attempted to enter.

“This man I have never seen says, ‘Now’s not a good time. You have to leave,’” Dorris said. “And I’m like, ‘What do you mean? I live here.’ Then, he opens the door, grabs my shirt, and pulls me in. Then he pistol whips me in the back of the head.”

Weider was the last one to show up. He entered through the back door, close to where he parked. Upon entering, he saw an unfamiliar face, then a gun was to the back of his head.

“As soon as I realize what’s happening, I’m like, ‘OK, I want to get a good look at this guy’s face,’” Weider said.

The two men stole everyone’s wallet and phone, along with the PlayStation 4, a pair of Beats headphones and Weider’s autographed baseball card he had since he was a kid.

Car and house keys were also stolen, but Dorris’s keys showed up at the house on Weider’s car. His keys say “Chevy” on it, but he actually drives a different car. Weider drives a Chevy.

He believes the men may have came back and tried to use Dorris’s keys to enter Weider’s car.

“They’re very comfortable,” Dorris said. “In that moment when they were there, the guy who was doing a lot of talking, he was God. He was just walking around. He was just so comfortable, very cocky. Tapping his gun on things. He was drinking a RedBull and poured it around.”

BUPD officer Jason Downs reported he and other officers responded to the incident within five minutes of the call. But to Weider and Bakr, it felt like 20. Dorris said Sally Click, dean of Student Services, arrived before BUPD. Click said there were two police officers taking down information when she arrived.

“She was on the front lawn the first day and she was talking to all of us making sure we were good, offered us counseling,” Bakr said. “Then she was there the next day kind of hanging out at the house.”

“We were just wondering how Sally Click was able to figure out so quickly and get over to the location,” Dorris said.

“I recognized this was a tight knit group of friends and we talked about leaning on one another and also discussed the availability of meeting with one of our university counselors if they were interested,” Click said in an email. “I paved the way for that to occur and alerted our counseling staff that individuals may seek services.  I offered to buy lunch for anyone that did not have a wallet, student ID, etc. I let people use my phone to contact parents, banks, etc.”

Click said it is standard practice for staff members from Student Affairs to connect with students involved in emergencies. She said Ross stopped by later that afternoon.

“I wanted to be there to support the students and to assist them in the immediate response (without getting in the way of BUPD officers who were speaking with each individual involved),” she said in an email.

Dorris said he was disappointed in the police response time.

“Not that they were being intentionally not helpful, but they were just really not transparent with us at the beginning,” Weider said. “They met with us Friday to update us and were being direct as they could.”

BUPD Chief John Conley said the time of the robbery was unusual.

“There is a strong possibility that other people had seen something they didn’t think was too unusual, but looking back on now, may be pertinent information,” he said.

According to the case report, “the suspects were described as black males, one wearing a blue sweatshirt and the other wearing a black sweatshirt. It was dispatched that the suspects’ vehicle may possibly be a dark-colored Ford Focus with a paper license plate in the back window.”

Bakr said he wished those on campus were notified of the robbery sooner.

Those signed up for Dawg Alert did not receive a notification on Oct. 17. Dawg Alert is Butler’s emergency notification tool. Users can sign up to receive alerts via text, email, call or all three.

An email with the subject line, “Timely Warning” was sent to the university four to five hours after the incident.

Julie Kopecka, first-year political science major, lives in Ross Hall, close to the junior house. She is signed up for Dawg Alerts, and said she had not heard of the incident prior to the email.

“I kind of assumed we got alerts right away,” she said. “Even if it’s just minimal information. So, I guess that’s a little concerning, especially since it was really close to us.”

Two thefts also occurred at the HRC that same day between 12 and 1:30 p.m. But Conley and Josh Downing, associate director of HRC operations, said they have no reason to believe the house robbery is connected.

“I don’t believe they were and this is why: we have tight control on who’s coming in. You have to scan your ID to get the gates to open,” Downing said. “It’s certainly a weird coincidence.”

One person had a wallet and a phone stolen from the open cubbies in the workout area. The other had a wallet stolen from a bench in the men’s locker room. There was also another theft at the HRC on Sept. 8.

Downing encourages visitors to take advantage of the free day lockers. Each locker room has 10 day lockers, and there are also some lockers by the main desk.

“People have the opportunity to lock things up,” he said.

But on Butler’s campus, Weider said, it’s common for students to feel safe — so safe they leave things unlocked.

“Never in my time on Butler’s campus expected to see anything like [the house robbery],” he said. “We all felt really safe there before. It’s a welcoming environment…that’s why, you know, sometimes we have the doors unlocked.”

Dorris said they have always had an open door policy.

“The cops told us that was the case for most junior and senior houses on campus… the doors aren’t locked because they feel safe because it’s a college campus,” Bakr said. “But so did we, and look what happened.”

There have been talks on campus of other house robberies since Oct. 17. Conley said officers have heard these rumors, but nothing has been reported to BUPD.

“You know that anyone can kind of come onto campus,” Kopecka said, “but I feel like we have such a bubble that you wouldn’t really think there are people that would come in and potentially cause harm. And they did.”

The Collegian will continue to investigate and report on these incidents as we find more information.