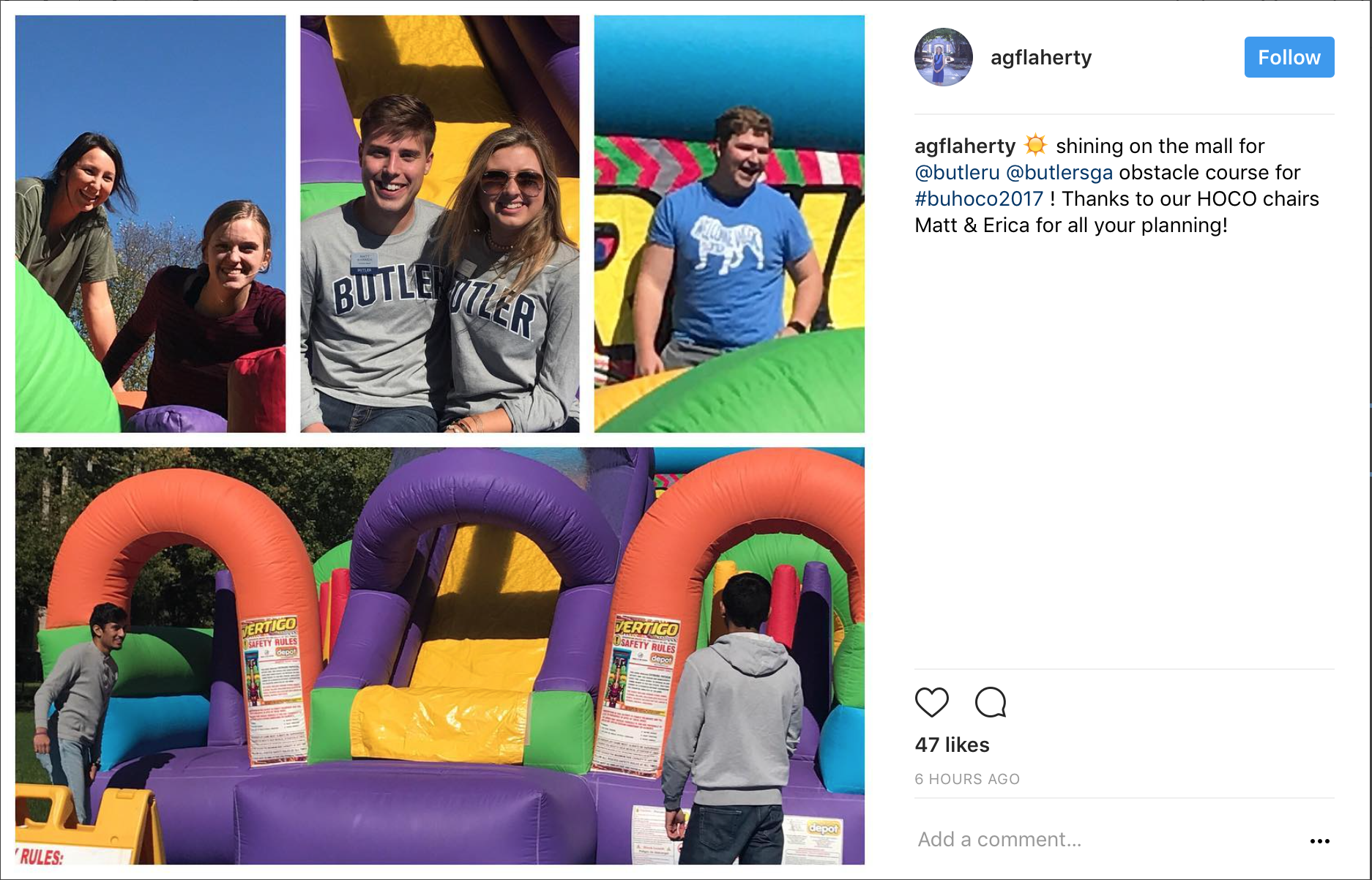 The homecoming football game will fall on Oct. 21 at 1 p.m., but all throughout the day and the week leading up to it, events will happen across campus.

The Oct. 21 schedule includes tailgating, “The Bulldog Beauty Contest,” the homecoming parade, the Butler soccer game against Villanova and the Butler football game against the Campbell.

In the morning, Sigma Chi have their annual Chariot Races, where each fraternity will face off in a race down Hampton Avenue.

Throughout the day tailgates will occur in the Hinkle parking lot, while fans gear up for the game. Food trucks will be at the tailgate from 10 a.m. until game time.

Gwen Valles is a first-year international studies major. She said she is excited for the social aspect of homecoming.

“By participating in homecoming you get to meet a lot of older people,” Valles said. “I thought homecoming ended with highschool, and it is really nice to find out that we can still tailgate and do fun stuff here.”

The parade will begin at 11:30 a.m.. New to homecoming this year, each of the Greek life and residence hall/commuter pairings will do a minute-long cheer during the parade. SGA promotes this aspect of the parade as a way to get more students involved.

After the game, SGA is bringing back Scratch & Bang, the group that was the opener for Kesha at Butlerpalooza last year, to perform in the Reilly Room at 10:00 p.m.

Madeline Murray, sophomore critical communications and media studies major, said she is excited to experience homecoming as a member of Delta Delta Delta.

“I’m in Greek life which I think really adds to the homecoming experience,” Murray said. “Getting paired with the first years is really fun because you get to meet a lot of new people and get them involved.”

Lindsay Trameri, senior international business major, is the Vice President of Education for Independent Student Council. She said that homecoming activities are usually spearheaded by Greek houses because of their financial and organizational means, but that does not mean that independent students are left out.

“Pairing [independent students] with Greek houses promotes a bridging of the gap between communities,” Trameri said. “While Greek students participate heavily in homecoming, this is the time to unite the student body, alumni and the community.”

In the week leading forward to the big game, SGA has a whole schedule of events for students to get involved in and earn points for their Greek life and residence hall paired teams.

Yesterday at 9:30 p.m., teams competed in “Jungle Ball,” soccer with a massive inflatable ball, at the Sellick Bowl.

Today at the Atherton Mall, there was an exotic animal show from 11 a.m. until 2 p.m.

There will be a social media picture challenge during the day on Oct. 18, a Butler soccer game against Indiana University at 7 p.m., and a Yell Like Hell skit preview at 8:30 p.m.

On the morning of Oct. 19, each team will debut their lawn decorations, and the full Yell Like Hell performances will begin at 8 p.m.

She said the event that she is most excited for is Yell Like Hell because she got to participate in it last year and now is helping to organize it. This year’s theme is Animal Kingdom.

“I’m really excited to see it from the other side this year and see what all the teams come up with,” Olsen said. “It is really cool to see how the teams can be creative with it.”

Olsen said the planning for Homecoming and making sure everything goes smoothly is quite the task.

“It is definitely stressful, but fun overall,” Olsen said. “I wouldn’t trade it for the world. You’re definitely on your toes the whole week because all the events are one after the other.”

Olsen and the rest of the SGA have been planning for this year’s homecoming since last February. A full list of homecoming festivities can be found on Butler’s website.