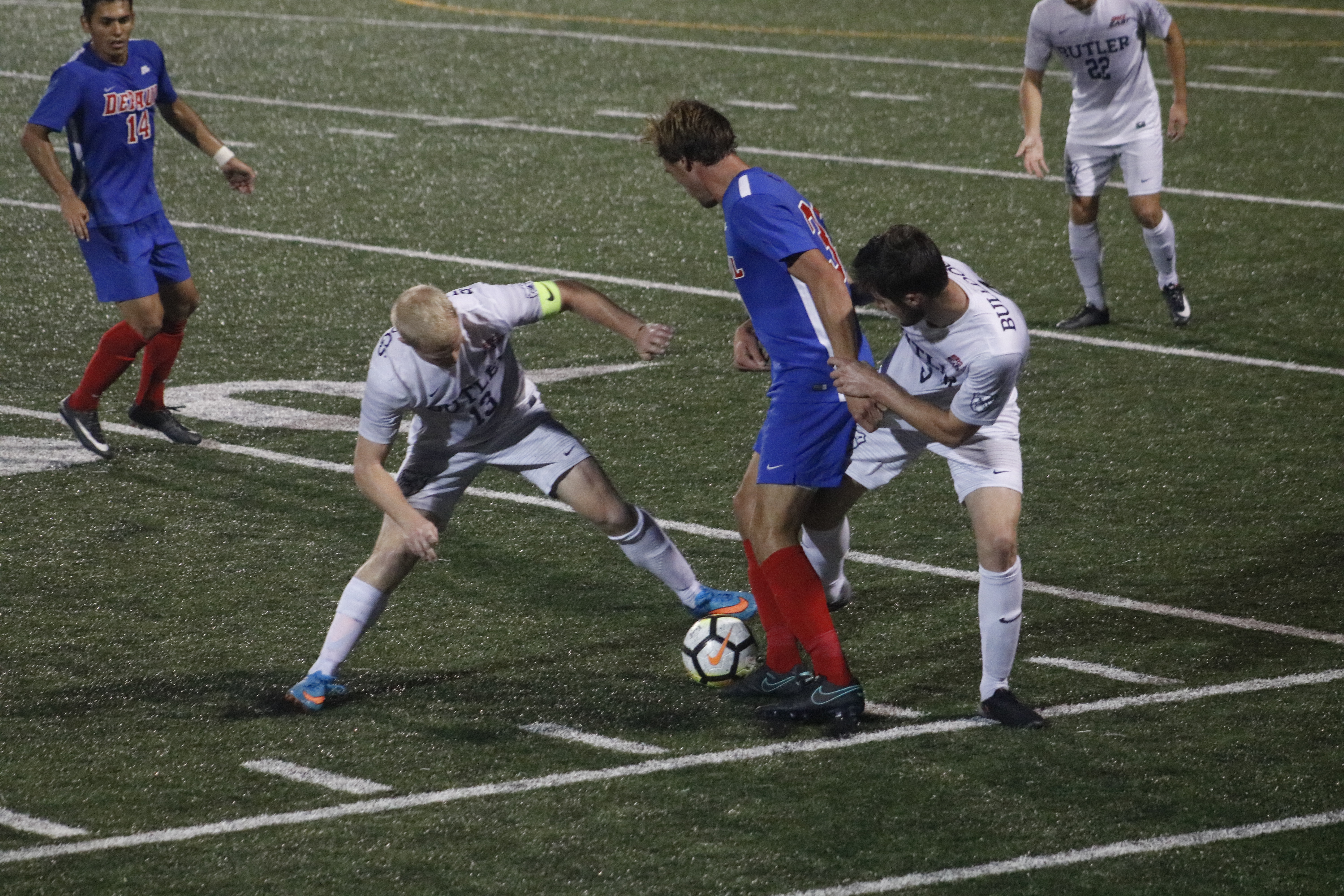 Eric Leonard and Joe Moulden battle with DePaul for the ball. The Butler team is now 9-4-1 this season.

The Butler men’s soccer team defeated Villanova University, 1-0, on senior night at the Sellick Bowl on Oct. 22. With the win, the team moves to 9-4-1 on the season and 5-1 in the Big East.

“Winning is vitally important, especially at this time of year,” head coach Paul Snape said. “Yeah, you wanna play a really stylistic, beautiful game and you know, you’d love to win four, five, six-zero. Reality is, at this point in a great conference, you’re not — so I’m really happy with the winning mentality right now.”

Sophomore midfielder Lewis Suddick opened the scoring in the 16th minute with his fourth goal of the season. Senior midfielder Bennett Kim worked some magic in the center of the park and slid the ball through to Suddick for his first assist this season.

“It was a great feeling honestly,” Kim said. “The night couldn’t have gotten any better.”

Bennet Kim with a nice turn in the midfield and finds Lewis Suddick who slots it past the keeper.

The two teams took turns being the aggressor in the first half. At halftime, Butler held a 4-3 advantage in shots and a 2-1 edge in shots on goal.

In the second half, the better scoring chances went to the Wildcats, but both teams had opportunities to find the back of the net. However, both defenses stood strong and Butler was able to preserve the win.

“Great to get the win with a one-nil shoutout,” Suddick said. “The challenge in the next few weeks in can we go and get two, three, four because we’ve got the quality and we know we’ve got the defending right now.”

A first half goal from Lewis Suddick assisted by Kim gives Butler a 1-0 win over Villanova and improve to 5-1 in BIG-EAST play.

“We’re a really tight-knit group of lads,” Suddick said. “When the chips are down or when we’re having a bit of a tough game, you know, we can get behind the ball and we can really make it hard for teams to get through us.”

Shots were 8-7 in favor of the Bulldogs. Butler held the Wildcats to only two shots on goal, but only mustered three themselves.

Up next for the Bulldogs is a trip to Seton Hall University on Wednesday, Oct. 25. Kickoff is scheduled for 7 p.m.