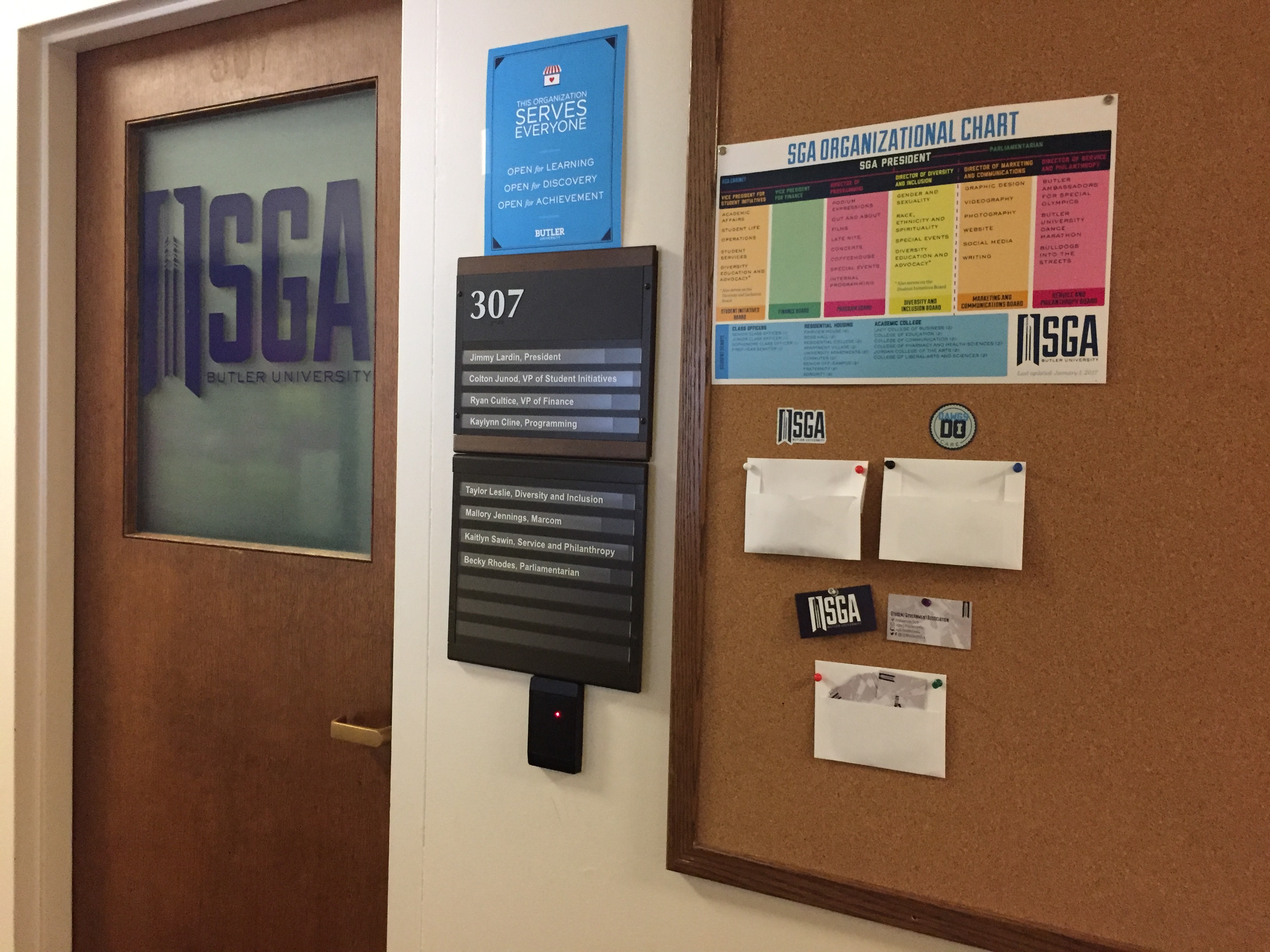 The SGA office is on the third floor of Atherton Union. Nine senate positions remain open. Photo by Jessica Lee.

Elections were supposed to take place Sept. 14 for hopeful SGA senators, but they did not happen.

There were technological issues with getting the electronic elections up and running, which caused the election itself to be pushed back one day. Students were sent multiple emails regarding the election and the delay, and eventually the actual election took place Sept. 15.

The application deadline for senate candidates was also pushed back before the election in an attempt to fill more senate roles.

The SGA Senate is comprised of representatives from different colleges, classes and residence halls. They oversee new student organizations, approve budgets, address concerns of the students and work closely with the Student Initiatives Board to identify problems on campus and recruit people to solve them.

Sophomore Becky Rhodes is the senate parliamentarian for SGA. She acts as the right-hand person to the student body president and oversees the senate and their agenda. She said this election season has been particularly crazy.

“It has definitely been confusing due to a lot of different things,” Rhodes said.

Multiple senate positions had only one or two candidates to choose from during this election. Each senator position, except for class senators, has two spots for students to fill, and Rhodes said filling those spots just depends on the year.

“We’ve had a good outcome this time but we do have a few vacant spots which we are looking to fill,” Rhodes said. “We are going to be holding interviews.”

This year the biggest competition for senate spots was for the College of Liberal Arts and Sciences; but SGA is still looking for senators from sororities, off-campus housing, on-campus apartments, College of Communication, Jordan College of the Arts and the Lacy School of Business.

A lack of competition in SGA elections is nothing new. In 2015, Katelyn Sussli ran unopposed and won the position of SGA president. That was also the year the senate was established.

Rhodes said she understands why people do not get involved with SGA because of the other options for student involvement on campus.

“I feel like there are so many things on Butler’s campus that people can get involved in that sometimes it is a little crazy and [groups] can get lost,” Rhodes said. “I think senate is one of those because we are just as big as any other organization on campus.”

This seems to be a common explanation for the lack of competition in SGA elections. Last year’s student body president, Paige Haefer, made similar comments last spring.

Along with a lack of participants in SGA itself, some Butler students do not vote in the election at all.

“I didn’t know a ton about it,” Robleski said. “I know I voted last year, and this year I remember seeing the email and saying, ‘Oh, I should do that,’ and just kinda forgot about it. I don’t know if I’ve ever felt like it has had a large impact on my time here [at Butler], but it is probably still worth voting for.”

Sophomore engineering major Jordan Brooks said she did not know SGA elections were going on.

“I didn’t know when the election was,” Brooks said. “I had friends running for positions last year and I voted then.”

Brooks and Robleski agreed that not having enough competition in an election is a challenging problem to solve because students have to want to commit to the position.

“You can’t just force people to run so it is understandable, and you can’t do much about it,” Robleski said.

“You have to be willing to do stuff, because it is a major time commitment,” Brooks said. “Last year, it seemed like there were a lot of people that wanted to run for things, but there are definitely more people that don’t run for things that could do it.”

Rhodes, the now senate parliamentarian, was a first-year senator last year in SGA and thinks the experience is unlike any other on campus.

“I definitely love SGA,” Rhodes says. “I am a political science major and that’s something I want to do with my life, but it gives a unique opportunity to be behind the scenes with everything and know what’s going on and be able to make a change in your school.”

Rhodes said making an impact while at Butler is one of his favorite things about SGA.

“It is really cool to be able to vote on things and have a say on what goes on on campus,” Rhodes said. “It’s really cool, I love senate.”

In the future, some changes will be made in order to help Rhodes and other members of SGA make that impact.

Jesse Neader is the assistant director for programs for leadership and service education. He said this election was unique because of Rhodes taking her position so last minute.

“The advertising period for an election, because that is the parliamentarian’s primary responsibility, I think that there needs to be more lead time on that and that was nothing that we could broach right away,” Neader said.

Along with more time to plan and advertise for an election, Neader said he hopes that new technology can help to get the word out about senate positions and elections.

“Senate just purchased a new student organization management system,” Neader said. “Basically it is an integrated system that does forums but also social media and events so that’s a way that a lot of the digital stuff can be pushed out to all student organizations and students within.”

Because of the amount of students that are involved in multiple clubs or groups, Neader said he is confident that this new program that targets members of student organizations will make a difference in coming elections.

“When you have a high correlation between students that are already in clubs and organizations that end up getting involved in others, and then you have those listservs going out, it is a trickledown effect where you have more people that are wanting to be involved or looking for those opportunities,” Neader said.

Other changes could come to timeline of the election itself. As of now, the residential senators run in the hall government elections, an election that typically occurs a couple of weeks before the traditional senate elections. Neader said that SGA is contemplating a unified election day for all of the senate positions. He hopes that by adding the residential senators to the senate election, people might have more time to consider running.

“Are people on campus and thinking about involvement opportunities right away, or are they thinking about getting to their first class?” Neader said.

This year’s senate election results can be found in SGA’s Carillon Newsletter.