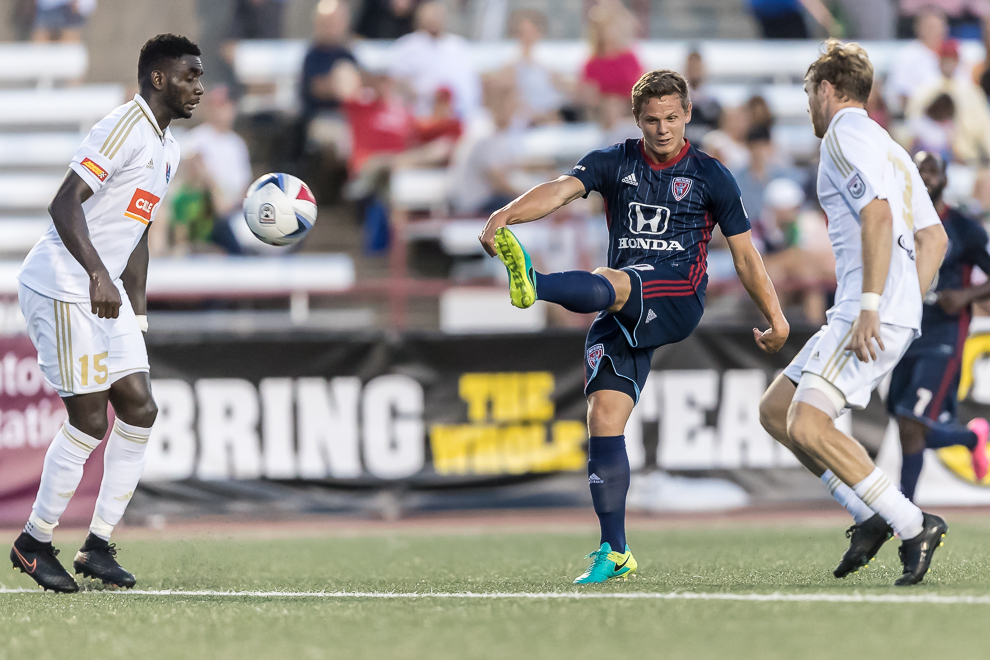 Across the Atlantic Ocean and 3,892 miles away from his hometown of Bristol, England, former Butler men’s soccer standout David Goldsmith lives out his dream as a professional soccer player.

In his four seasons as a Bulldog, Goldsmith netted 41 goals. He was named Big East Co-Offensive Player of the Year and a NSCAA second team All-American in his senior season.

After nothing materialized, Butler men’s soccer coach Paul Snape connected Goldsmith with Indy Eleven. He signed with the team on March 21.

“The fans at Indy Eleven, you know, there are so many of them and they’re so amazing,” Goldsmith said. “I’ve been able to see that from Butler from the outside, see what it’s like. Being thrown into that position where you have all those fans at games, it’s great.”

His first professional appearance came on April 29. He got two minutes of action as a substitute. His first start came two weeks later.

“He’s got a great professional attitude, a great worth ethic,” Indy Eleven head coach Tim Hankinson said. “He comes to every single training trying to make a statement in how he trains and his ability to be a technically gifted player around the goal.”

When the fall season began for the team in July, his role on the team increased drastically.

He has his third career start in the fall season opener against FC Edmonton and netted his first career goal seven minutes into the game on a tap-in in front of the net.

“I texted him and he goes, ‘Yeah, it wasn’t that hard,” Snape said. “But my text back to him was ‘Well, people don’t understand you’ve made that run 25, 30 times before and the ball doesn’t come to you. Ninety-nine percent of other forwards wouldn’t keep making those runs. It wasn’t luck that got you the ball.’”

After scoring the goal, Goldsmith started four of the team’s next five games and appeared in all five.

“I’m definitely not satisfied with just that one goal and a couple of starts,” Goldsmith said. “I kind of want to push forward from here and cement myself more regularly in the team.”

In addition to playing in front of friends he made while at Butler, Goldsmith’s proximity to campus also allows him to stay connected to the men’s soccer program.

“[Goldsmith’s] just a great mentor to me,” senior midfielder Eric Leonard said. “Someone who you can always look to for support on and off the field.”

This season, he is serving as a volunteer director of operations for Butler, helping with social media and scouting the team’s upcoming opponents.

“The boys can see him, he’s a pro who comes back and donates his time and helps us,” Snape said. “It’s been wonderful. He’s been a role model even to this day.”

As Goldsmith becomes more and more comfortable at the professional level, the next step is to turn the early success into a productive career.

“There aren’t typically guys who are gifted at getting a goal,” Hankinson said. “I think that’s the key for [Goldsmith]’s future is be a goal scorer, not just a striker. If you can combine those two roles of being a striker and a goal scorer, then your future is bright.”